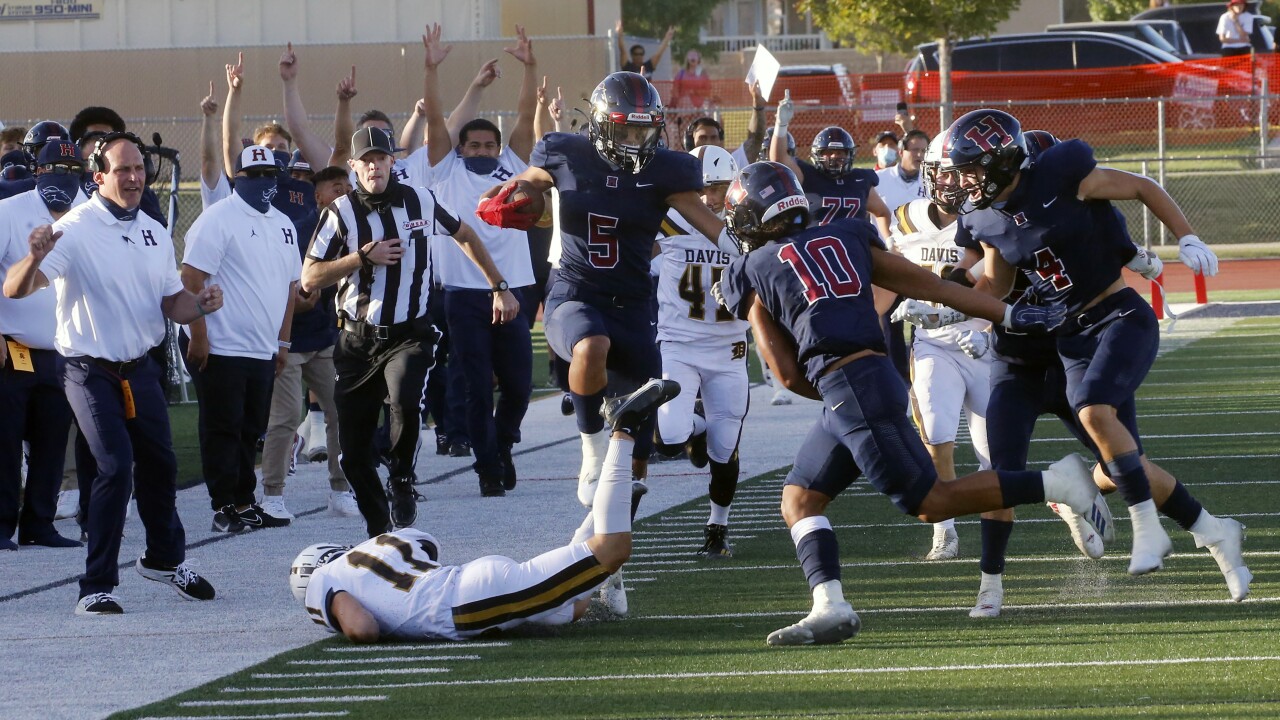 Rick Bowmer/AP
Herriman's Brock Hollingsworth (5) hurdles Jackson Leaver (11) during a high school football game, on Thursday, Aug. 13, 2020, in Herriman, Utah. Utah is among the states going forward with high school football this fall despite concerns about the ongoing COVID-19 pandemic that led other states and many college football conferences to postpone games in hopes of instead playing in the spring. (AP Photo/Rick Bowmer)

SALT LAKE CITY — “I can’t believe I’m about to say this, but, we all need to start acting like high school athletes,” said Utah Department of Health State Epidemiologist Dr. Angela Dunn on Thursday. “They (athletes) have something they care about and they’re protecting their ability to keep playing.”

As part of Governor Gary Herbert’s executive order, high school football playoffs were given the green light to continue. Utah Department of Health has been testing those affiliated with the various high school football programs prior to semi-final and championship competition that resumes Thursday night.

“Yesterday (Wednesday), we tested 1,360 individuals,” said Dr. Dunn. “These are players, coaches, trainers, drill team and cheerleaders, and we only identified 49 positive cases that’s a percent positively of 3.6 percent.”

Despite the data used by Governor Herbert during his address on Sunday night regarding the spread of the virus among 15-24 year-olds, the remaining high school football programs have a very low positive-percent rate compared to the daily state numbers released on Thursday.

“We’ve heard strong anecdotal evidence that kids participating in these football programs are taking COVID precaution very seriously,” said Dr. Dunn. “They’re physically distancing, they’re associating socially with only a few number of people and yes, they’re doing this to protect their football season but this is very clear for the rest of us that these types of behaviors work.”

6A semifinals continue Thursday. More testing will continue for the remaining teams that will compete on Friday, including the teams playing for 3A and 2A championships at Dixie State University on Saturday.

Utah Department of Health has been using the rapid-return antigen 15-minute tests. Since false positives are possible with these tests, if a player or personnel tests positive and doesn’t believe the result to be true, they are encouraged to take a PCR follow up test.

Compared to prior restrictions and district-specific cases, football programs had been canceling games with any number of positive cases. However, during the remaining post season, there is indication that a positive test from a teammate means the entire team will be subject to cancellation.

“There’s not threshold in terms of raw numbers but if you’re a positive you are not allowed to play and if you’re a negative you are allowed to play it’s that simple,” said Tom Hudachko with Utah Department of Health regarding the decisions made by the School Health Advisory Work Group, comprised of health experts, UHSAA members, pediatric infectious disease specialists and local education representatives.

Dr. Angela Dunn used the high school athletes as an example for all Utahns during Thursday’s press conference after a record-day for COVID-19 cases in the state.

Utah Department of Health would not provide data on a school-by-school basis for the latest football program testing.