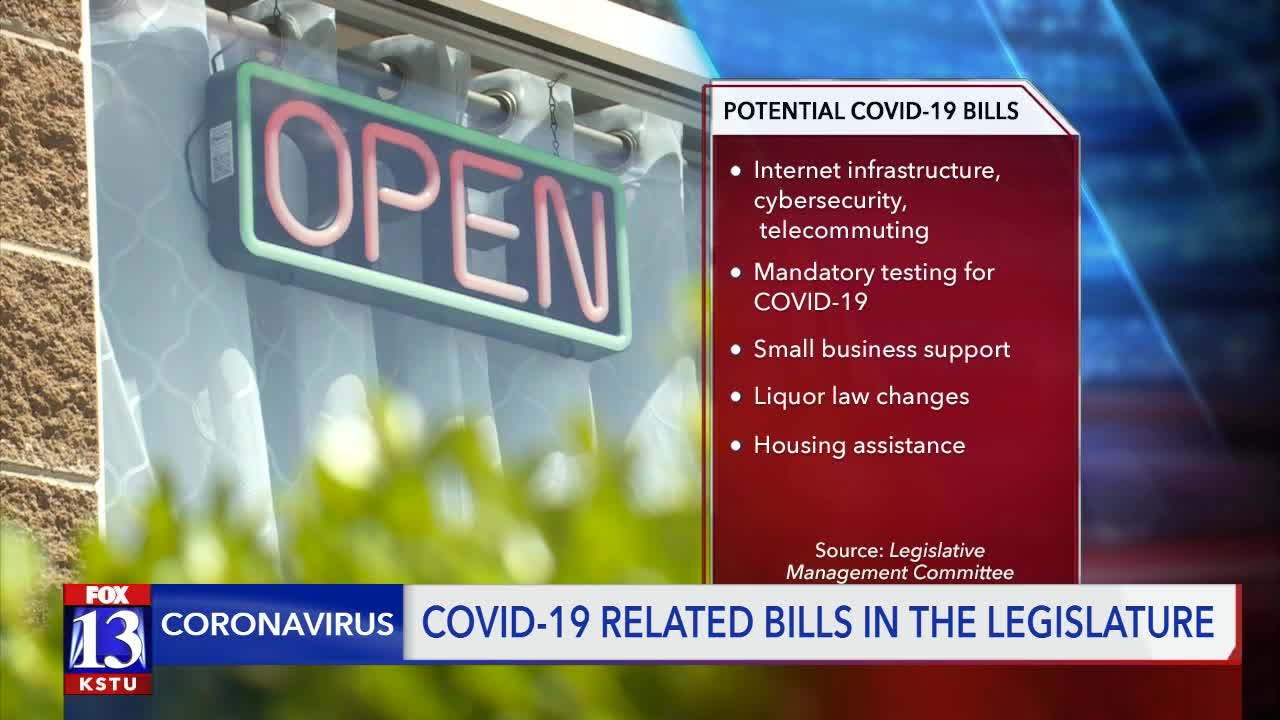 The Utah State Legislature could explore dozens of potential bills responding to COVID-19 over the next year. SALT LAKE CITY — The Utah State Legislature could explore dozens of potential bills responding to COVID-19 over the next year.

A 12-page topic list was approved by the Legislative Management Committee, spelling out what will be considered by lawmakers over the interim between sessions. Not surprisingly, each committee had pandemic-related bills.

"A lot of legislation is responsive, right? And this is a unique situation that we’ve responded to," said Senate Majority Whip Dan Hemmert, R-Orem.

Topics that could potentially become bills include:

"That, to me, is the biggest deal. It’s what can we do to get the economy re-going. Whether it’s support for renters, unemployment or the businesses that got shut down or were materially impacted, what’s that balance of getting the economy re-going," said Sen. Hemmert.

One study item up for consideration could re-ignite a controversy. It would "study whether to repeal or limit county and local health department powers to issue a shelter-in-place order. Alternatively, codify shelter-in-place order regulations for local opt-in— this could include guidance for law enforcement."

The legislature was considering a bill that would have reigned in some local health orders initially. It was then modified to require more sign-off from local elected officials.

"I think there’s a fine line and a bright line," Sen. Hemmert said, acknowledging the controversy of such legislation.

"We always in Utah applaud ourselves on local control and respecting the voice closest to the people. But at the same time, the flip of that, is those local governments are subdivisions of the state government," Sen. Hemmert said. "They were created by the state government."

"I chuckle that I’m used to the legislature trying to tell me what to do and what not to do. My bigger concern is any overreach of a health authority during a pandemic," Mayor Wilson told FOX 13. "That is something that does not make sense. I can tell you we are a lot further along as a state due to our health departments."

The mayor said she would likely oppose bills to drastically restrict local health authorities. The Utah League of Cities and Towns pushed for modifications of previous bills considered by the legislature.

"I would absolutely fight against any lessening of the authority of experts, scientists and people who understand health. That’s who we need to be in the driver’s seat as we look at economic recovery as well," Mayor Wilson said.

The legislature is not likely to consider many bills unrelated to the COVID-19 pandemic for any special sessions that are planned. Lawmakers are expected to meet in a special session in June to deal with the budget, and again in July to deal with any policy tweaks.

"They are areas where this pandemic has highlighted situational problems that should be addressed in the future," Sen. Hemmert said.

Other subjects (including medical cannabis, data privacy and a repeal of the death penalty) will likely have to wait until the 2021 legislative session in January.