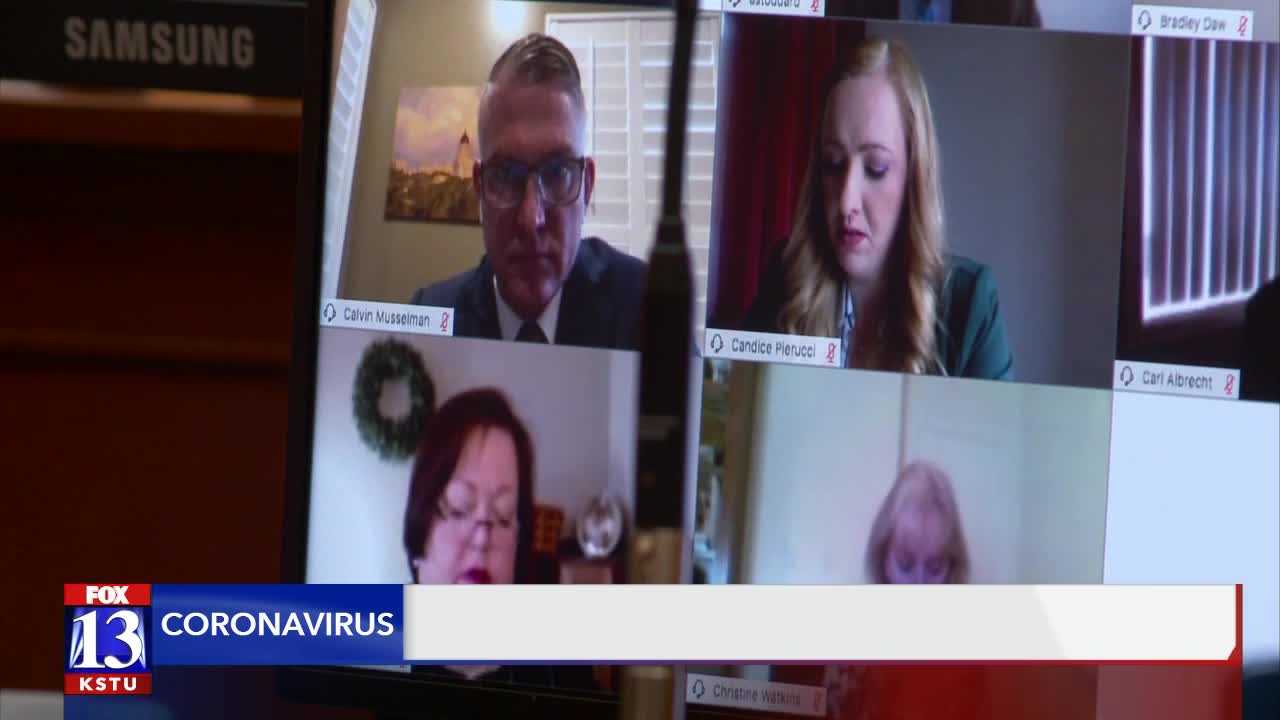 Utah lawmakers gather in a virtual special session to discuss the state's response to the coronavirus pandemic.

SALT LAKE CITY — Their desks were empty, but lawmakers were still present -- in a sense -- to debate and vote on major bills dealing with the COVID-19 pandemic.

Only the Senate President, the House Speaker and their respective staffers were present in the chambers. Lawmakers appeared over video conferencing apps for the Utah State Legislature's special session.

"These are times I don’t think I’ve ever experienced before in my lifetime as we face a pandemic and see the economic challenges it presents," Senate President J. Stuart Adams, R-Layton, said to his colleagues who appeared on monitors in front of him.

The House and Senate chambers make it impossible for lawmakers to socially distance appropriately. So they utilized video conferencing systems to meet remotely from their living rooms and offices across the state of Utah. There were a few technological snafus. For example, the just as the Senate was to convene, the entire system went down and they were forced to move to backup plans.

Throughout the special session, there were quite a few utterances of "can you hear me now?" During a debate, there was a moment of levity when a senator's cat meowed insistently.

But lawmakers moved quickly to pass bills responding to the COVID-19 pandemic. They made adjustments to the budget, expanded unemployment benefits, tweaked the statutes related to education in light of school closures, allowed for experimental medications to be used by patients, and allowed for first responders to get worker's compensation if they're exposed to COVID-19 on the job.

"This is a really big deal for small rural departments and rural Utah," said Rep. Casey Snider, R-Paradise, who is also a firefighter.

In a tender moment, Rep. Melissa Ballard, R-North Salt Lake, presented a resolution to thank health care workers, state employees, IT workers, essential workers and other people directly fighting the COVID-19 pandemic. Her father, auto dealer and former House Speaker Bob Garff, was one of the first victims of it in Utah.

"I have been personally affected, having lost my father recently to this lonely, isolating and mean virus," she tearfully said. "The governor and the legislature are profoundly grateful for Utahns who have chosen to stay home and stay safe, and for those public servants, who through this unprecedented, modern pandemic, have shown themselves to be heroes."

Rep. Suzanne Harrison, D-Draper, who is a physician responding to COVID-19, offered support for the resolution and said they all have a new appreciation for what it means to be an essential worker.

"I know I speak for all of us in sharing our deepest condolences for your family’s loss," she told Rep. Ballard.

The biggest debate was over House Bill 3005, which would demand that the governor consult with legislative leadership if he has to declare another emergency or issue executive orders. Critics of the bill have called it a "power grab" by the legislature.

"It seems unncessary. It seems like an overreach in which our branch, our legislative branch, is crossing lines into the executive branch of government and may be a violation of those separation of powers our constitution enshrines," said Rep. Merrill Nelson, R-Grantsville.

House Majority Leader Francis Gibson, R-Mapleton, insisted they just want to be involved in discussions with the governor.

"What I’m asking is you talk to us 48 hours in advance. Let us know, let us work together. For the assertion to say that he’s done that now, there’s some executive orders we as leadership found out 15 minutes prior to the declaration that this was going to happen," Rep. Gibson said.

The bill passed the House on a 56-18 vote. It was circled in the Senate as negotiations with the governor's office continue. Governor Gary Herbert has expressed concerns with the bill.

Still to be considered is a bill that would put more oversight on local health departments who issue "stay-at-home" orders like many Wasatch Front counties have done.

The Senate passed a bill to allow the state to accept millions in federal funds, even as they use rainy day funds to help keep essential programs going in the face of skyrocketing unemployment. Speaker Wilson told reporters that he anticipated more than $1 billion overall coming to the state.

"We’re going to have a billion and a half coming into state and local government, plus we’ll have a half billion to maybe a billion dollars of lost revenue to the state," he said. "The economic implications of COVID-19 are significant."

Senate Bill 3004 passed on Thursday night that creates a commission to "re-open" Utah economically as cases decline. Legislative leaders have hoped to see the state start to do that by the end of this month.

"I think it is time to start working to re-open the economy. This commission is tasked with figuring out ways to do it safely," Senate Majority Whip Dan Hemmert, R-Orem, said.

The special session resumes Friday. Because the public is not allowed in the Capitol building, people are asked to contact their elected lawmakers to weigh in on bills either by email or using an online form.