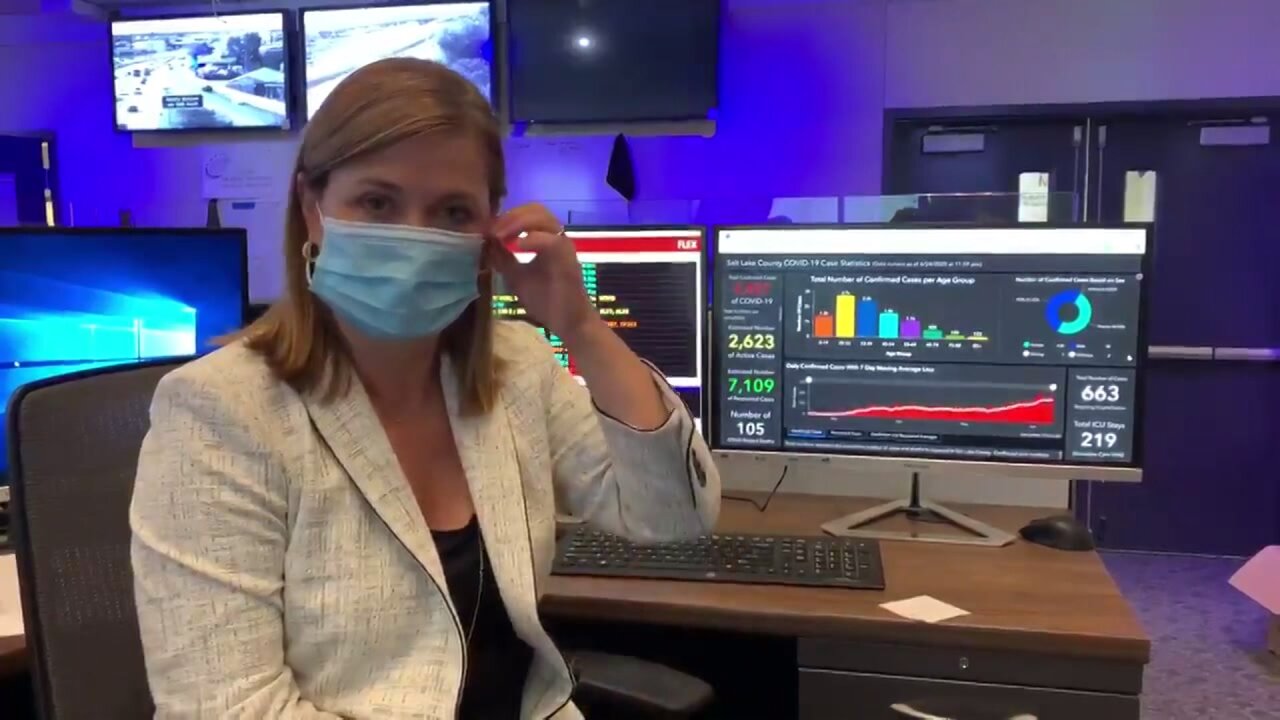 SALT LAKE CITY — Governor Gary Herbert has granted requests by Salt Lake and Summit counties to mandate the wearing of face coverings in public to slow the spread of COVID-19.

Mayor Jenny Wilson's office told FOX 13 they had been informed late Thursday that the governor would not make an announcement. She expected a decision to come Friday. However, FOX 13 confirmed through the governor's office he granted it.

"Face coverings are saving lives and they prevent the spread of virus," Mayor Wilson said, warning that Salt Lake County is close to hitting 10,000 cases of COVID-19 which she called "alarming." She said that since restrictions were loosened, the county has seen cases increase.

"We know that two things work to hold off the coronavirus in our community. One of them is a face covering. The other is social distancing," she told reporters late Thursday.

Salt Lake County Mayor Jenny Wilson requested the face mask mandate in response to Dr. Dunn's warning. Her order requires face coverings in retail and commercial establishments, restaurants while waiting to be seated and served, and at community gatherings. She was joined by Salt Lake City Mayor Erin Mendenhall and community leaders from Alta, Emigration, Magna, Cottonwood Heights, Holladay and West Jordan who asked for the mandate.

"This should not be a political issue. This is a health concern in our community and I just think it’s unfortunate and where we see people not complying, we need to keep some distance," Mayor Wilson said.

Mayor Wilson insisted people don't have to wear one outside unless they encounter others and can't be physically distant.

Summit County leaders sent their own request on Thursday, seeking to implement face coverings as a mandate and an effort to save its economy.

"Summit County is a location to which people travel, often from areas experiencing rapid disease spread. Based on our current adverse data trends, and the surging cases in surrounding counties, we strongly believe our primary hope in adverting a future business shutdown is through this proposed mandatory mask measure," county leaders wrote.

Summit County said violations of its face mask mandate would be an infraction, on par with a traffic ticket. Salt Lake County's would be a misdemeanor, but the mayor has said she would call for verbal warnings and education about the benefits of wearing a face mask. The order would only be rescinded when cases decline dramatically.

Speaking to reporters on Wednesday, the governor signaled that he was inclined to grant Mayor Wilson's request.

Health experts and Gov. Herbert himself have repeatedly urged Utahns to wear face coverings in public to slow the spread of the coronavirus. But some people have not adopted it and it has become a politically divisive topic. On Wednesday night, Republican gubernatorial candidate Greg Hughes blasted Mayor Wilson, Gov. Herbert and his campaign rival, Lt. Governor Spencer Cox, over it.

"Apparently, Cox and Herbert feel that it’s OK to continue trampling on our constitutional rights — just like when they shut down churches, approved of communist-style snitch hotlines, and crippled Utah’s economy," Hughes wrote in a post on Facebook. "If Cox and Herbert are willing to cede their leadership and sacrifice our personal liberties just one week before the election, imagine what they’ll do on July 1st. Enough is enough."

While Gov. Herbert himself has been an advocate for wearing face coverings (and sports them himself), he has been reluctant to implement a statewide ban. He continues to urge Utahns to exercise personal responsibility by social distancing, practicing good hygiene and wearing face masks.

The head of the Salt Lake Chamber, Utah's largest business organization, told FOX 13 that they would back any business that decided to refuse service to people who wouldn't wear a mask -- no matter where they are in the state.

"We’re familiar with these 'no shirt, no shoes, no service' policy," Chamber CEO Derek Miller said in an interview with FOX 13. "This is not something new. Businesses have the right to say if you want to come into our place of business, this is how you’re going to do it."

The Chamber has launched its own campaign urging face coverings and even public pledges from businesses that they follow recommended health guidelines to protect customers from getting COVID-19. Miller, who also heads the governor's COVID-19 economic recovery task force, said it was a way for businesses to publicly show customers they care about their health.