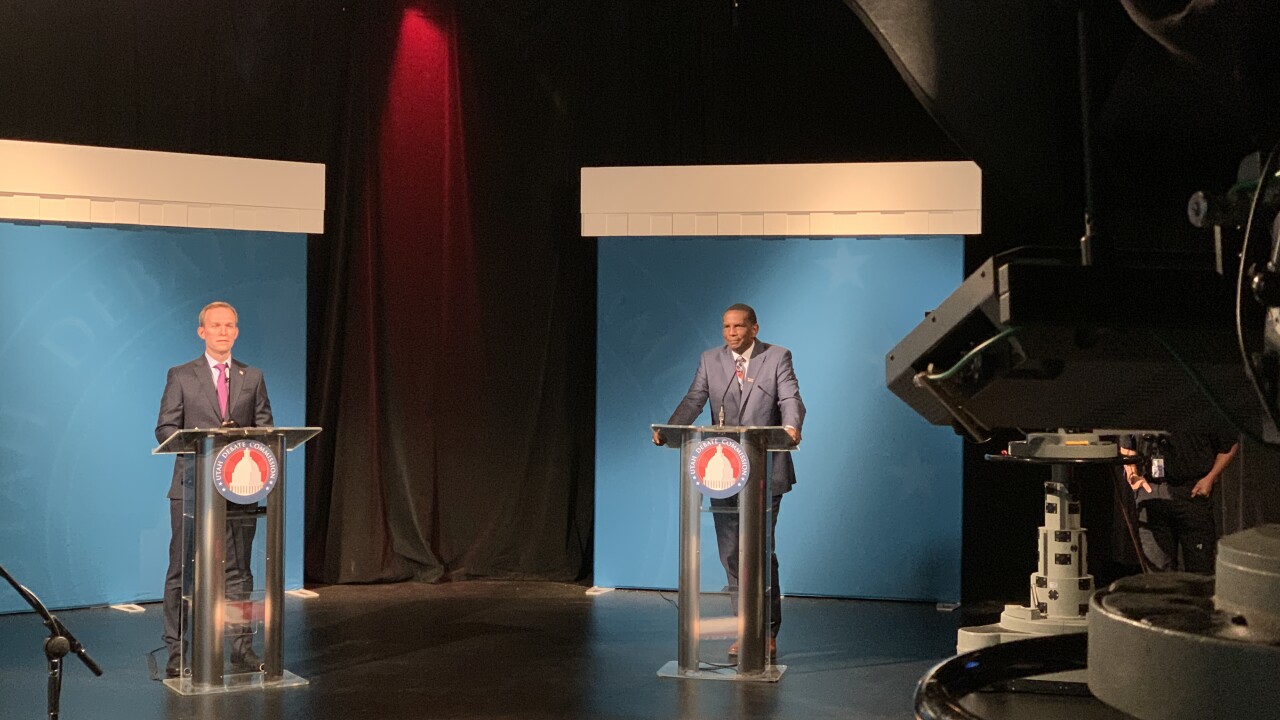 SALT LAKE CITY — In a wide-ranging and lively forum, incumbent Democratic Congressman Ben McAdams debated his Republican challenger, Burgess Owens over who should represent voters in Utah's most swing district.

The candidates portrayed themselves as people who can unite, while each fending off accusations they are truly partisan.

Both took issue with the federal government's handling of the COVID-19 pandemic.

"This virus is serious and we must take it seriously," said McAdams, who has recovered from the virus. "I believe that Washington has failed us. Congress has failed us."

McAdams voted against the most recent Democratic stimulus proposal, while Owens said any help should be targeted to those that will truly need it.

"Right now we’re looking at targeting help for folks who really need it. Not for states, not for blue states that want to get bailed because for the ways they’ve dealt things in the past. They don’t deserve that right now," he said. "I think the way is coming together and focusing on we, the people."

"Black Lives Matter, BLM Inc., in their manifesto, are against capitalism, against the nuclear family, they’re against God," he said.

McAdams said he believed there is more the country can do for racial equality.

"The events over this summer have highlighted to me while we’ve made so much progress, there is more we can do," he said.

The sharpest exchange between the two candidates came over a question posed by a student at Salt Lake Community College who has diabetes and worried about the future of the Affordable Care Act. McAdams defended the ACA and went after Owens for stating on his website he'd get rid of it.

"Simply saying you want to protect people with pre-existing conditions is not going to protect them. We have to keep the protections in place right now," McAdams said. "I'd be curious what your plan is to protect those people."

Owens responded that he is a cancer survivor and insisted President Trump and Congress had taken action to preserve pre-existing conditions. He accused McAdams of using "fear" to get votes.

"That’s been taken off. For my opponent to bring this is up, it’s kind of typical of what I’ve seen for so many years it’s not true," he said.

Owens was asked by FOX 13 about his appearances on internet shows linked to the fringe QAnon conspiracy theory.

"I still don’t know what QAnon means, or what they're all about," Owens replied. "It doesn’t matter because it doesn’t reflect on what I’m doing right now. It's very obvious what I'm trying to get done is make sure we have a youth, an environment where we love our country, God, country, family, respect to family and authority."

McAdams was asked about his vote to impeach President Trump.

"I stand by it. I think what the president did was wrong. I also do not hesitate to criticize the way the Democrats handled that process. I think it was also wrong and also overly-partisan," he said.

He proceeded to criticize Owens' courting of QAnon.

The most recent poll by the Utah Debate Commission, which hosted the debate, shows McAdams nearly 11% over Owens, but it is expected to be very close. Negative TV ads sponsored by political action committees have flooded Utah's airwaves, tying McAdams to House Speaker Nancy Pelosi and criticizing Owens' bankruptcies.

In the debate, McAdams said he would support campaign finance reporm, while Owens said he wanted to learn more about the topic.