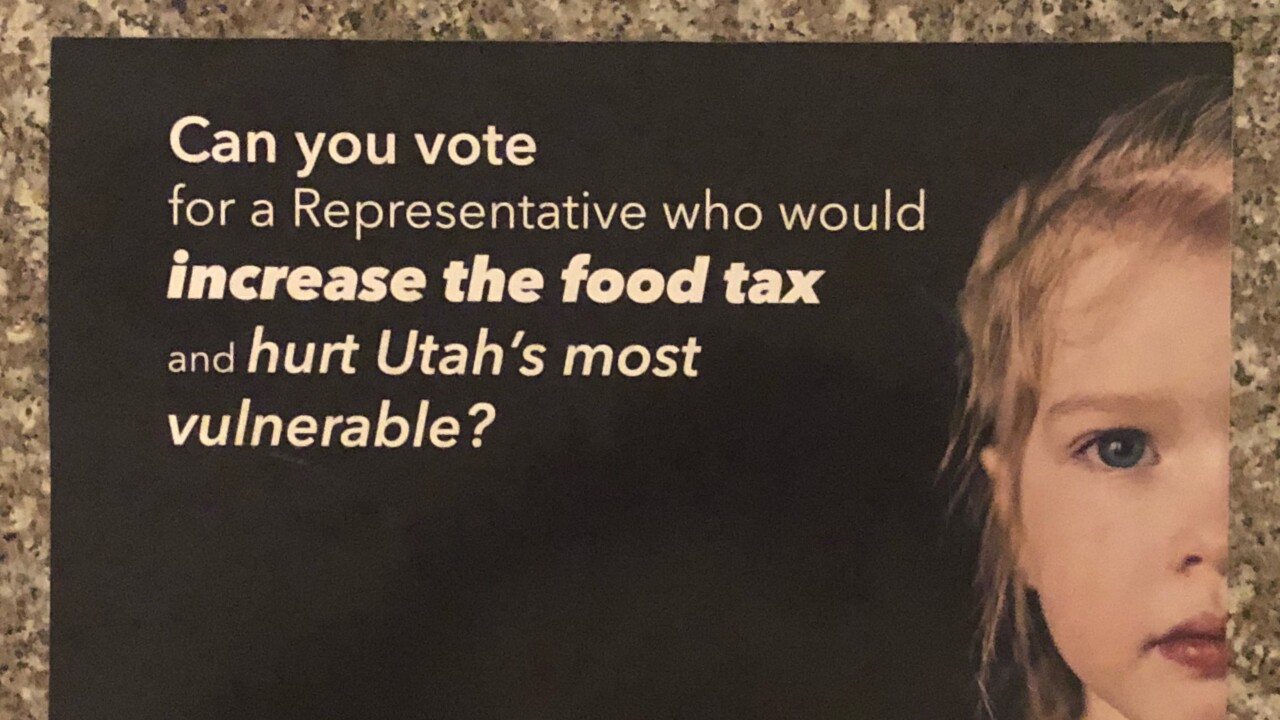 SALT LAKE CITY — The Utah Republican Party is criticizing a mailer paid for by their Democratic counterparts that is says unfairly characterizes the votes of some House lawmakers.

But the Utah Democratic Party said it is holding the GOP-dominated legislature accountable for its votes.

The mailers, sent to voters in swing districts, criticize the legislature's voting on the controversial tax reform bill earlier this year (that was ultimately repealed).

On one side, the mailer asks "Can you vote for a representative who would increase the food tax and hurt Utah's most vulnerable?" The other side points out the House Majority Caucus voted for it, and criticizes the lawmakers for doing "nothing to stop it."

On Twitter, Rep. Hall thanked those who spoke out against the mailer — including some Democrats in the Utah State Legislature.

Thanks to elected officials (including Democrats!), my constituents, and the press for universally condemning the blatantly false and negative political mailer in my race. #utpol #utleg

In her own tweet, Rep. Angela Romero, D-Salt Lake City, blasted her party for it, as did other members of the House Minority Caucus.

I don’t disagree w/ you. I’m disappointed that the @UtahDemocrats would stoop this low. The dem candidates running in these districts are honest hard working people. Their races have been tainted by the idiot that thought this was a good idea. Plus, I respect my house colleagues.

"The intent was clear — harm a candidate’s reputation right before the ballot was cast, and before there is time to correct the falsehood. We appreciate that many elected Democrats have publicly admitted that the mailers were deceptive and, as one elected Democrat stated, constitute 'untrue negativity,'" said Utah GOP Chairman Derek Brown in a statement to FOX 13. "We encourage all voters to do their homework, and not rely on the flurry of deceptive mailers and ads we are now seeing, like these sent by the Utah Democratic Party earlier this week. Above all, we encourage all Utahns to vote, and make their voice heard."

Utah Democratic Party Chairman Jeffrey Merchant defended the mailer, saying they are careful to point out the majority caucuses supported the tax bill. He said the mailers were sent to a number of legislative districts.

"I’m a little surprised how thin-skinned the Republicans have been over this mailer," Merchant told FOX 13 on Friday. "We feel like the people in these districts need to know these candidates are a part of the problem in Utah. The people consistently saying one thing and the legislature consistently doing something different because they think they know what we need."

Merchant said it goes both ways. Elected Democrats in swing districts were being targeted by mysterious text messages sent to voters that were seeking to criticize them as "liberal" or tie them to Bernie Sanders.