What to look for during the vice presidential debate 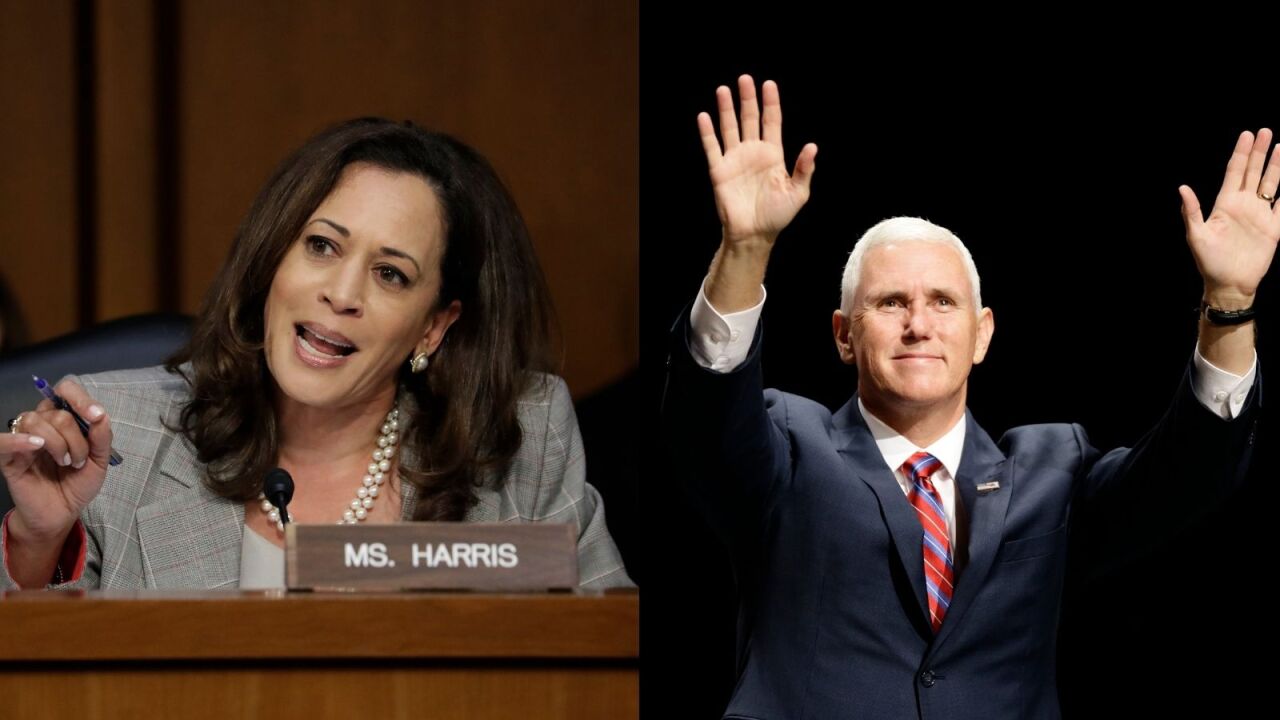 Photos by the Associated Press

Wednesday marks the second of four presidential debates, and the only one featuring the vice presidential candidates.

The debate is scheduled to begin at 7 p.m MT (9 p.m. ET) at the University of Utah's Kingsbury Hall and will last 90 minutes. FOX 13 will show the debate live on air, at fox13now.com/live, on the FOX 13 mobile and streaming device apps (search "KSTU" in Roku, Apple TV or Fire TV app stores) and on Facebook.

Here is what you need to know about Wednesday’s showdown.

Republican Vice Presidential nominee Mike Pence and Democratic Party candidate Kamala Harris were the only two candidates invited to Wednesday’s debate based on polling. In order to be invited, a candidate’s ticket must poll at 15 percent or above in a series of national polls.

Pence has been serving as President Donald Trump’s vice president since 2017. Before 2017, Pence was the governor of Indiana for four years. Before that, he served in the US House of Representatives for 12 years.

Sen. Kamala Harris is in her first term as a US senator from California. Previously, she was a six-year attorney general of California, and a seven-year district attorney in San Francisco. Harris was an opponent of Joe Biden during the presidential primaries, but dropped out before the Iowa Caucuses and later endorsed Biden.

Susan Page, current Washington Bureau Chief for the USA Today, will serve as moderator. Page is the first primarily print journalist to moderate a presidential or vice presidential debate since 1976. Page is a frequent guest on the Sunday morning talk shows and was a White House Correspondents Association president.

The vice presidential will feature a format similar to last week’s presidential debate. Instead of six, 15-minute segments, Page will break the debate into nine, 10-minute segments. Page will ask a candidate a question that they have two minutes to answer, and the other candidate will then have two minutes to respond. The balance of the time will be used for a deeper discussion on the topic.

Why have a vice presidential debate?

Vice presidential debates have generally served as an opportunity for candidates to show they are prepared to become president. Nine vice presidents have ascended to the presidency due to death or resignation.

With the possibility that one of the two candidates could become president in the next four years, the debate could serve as a presidential litmus test.

Are you ready to be commander-in-chief? Now that Trump has turned 74, and Biden is about to turn 78 next month, this year’s campaign has been between the two oldest nominees on record.

Should there be a debate?

This question has been pondered in recent days as the White House has had a cluster of coronavirus cases. President Donald Trump, first lady Melania Trump, aides, assistants, White House-based journalists, and three US senators have all been among those who have tested positive for the coronavirus in the last week.

Not among those testing positive is Pence, who has been tested every day since Trump’s diagnosis. But CDC guidelines call for those with close contact with coronavirus patients to quarantine for 14 days regardless of negative tests as the incubation period for the coronavirus can take that long.

The Commission on Presidential Debates announced Monday that a Plexiglas partition will divide the candidates, and that Harris and Pence will sit more than 12 feet apart on the debate stage.

Most important VP debate in history?

John Hudak, Deputy Director at Brookings’ Center for Effective Public Management,declared Wednesday’s debate as the “most important vice presidential debate in American history.” And given the age of the candidates and recent discussions over the 25thamendment due to Trump’s stay in Walter Reed Medical Center, Hudak argues that this election’s vice presidential debate takes on new meaning.

There has also been extensive economic fallout stemming from the coronavirus.

So a question likely to be asked of Pence is on his performance as the leader of the coronavirus task force.

Harris finds herself in a challenging position as both a former prosecutor and a reformer. Her record as a prosecutor became more of an issue at times during her run for the Democratic nomination for president.

With race and police relations a significant issue this year, expect questions to be raised over Harris’ record as a prosecutor.

A presidential debate is scheduled for October 15, but there are questions on whether Trump will be medically cleared to participate. Assuming the debate moves forward as scheduled, it will be the second of three debates between Biden and Trump.