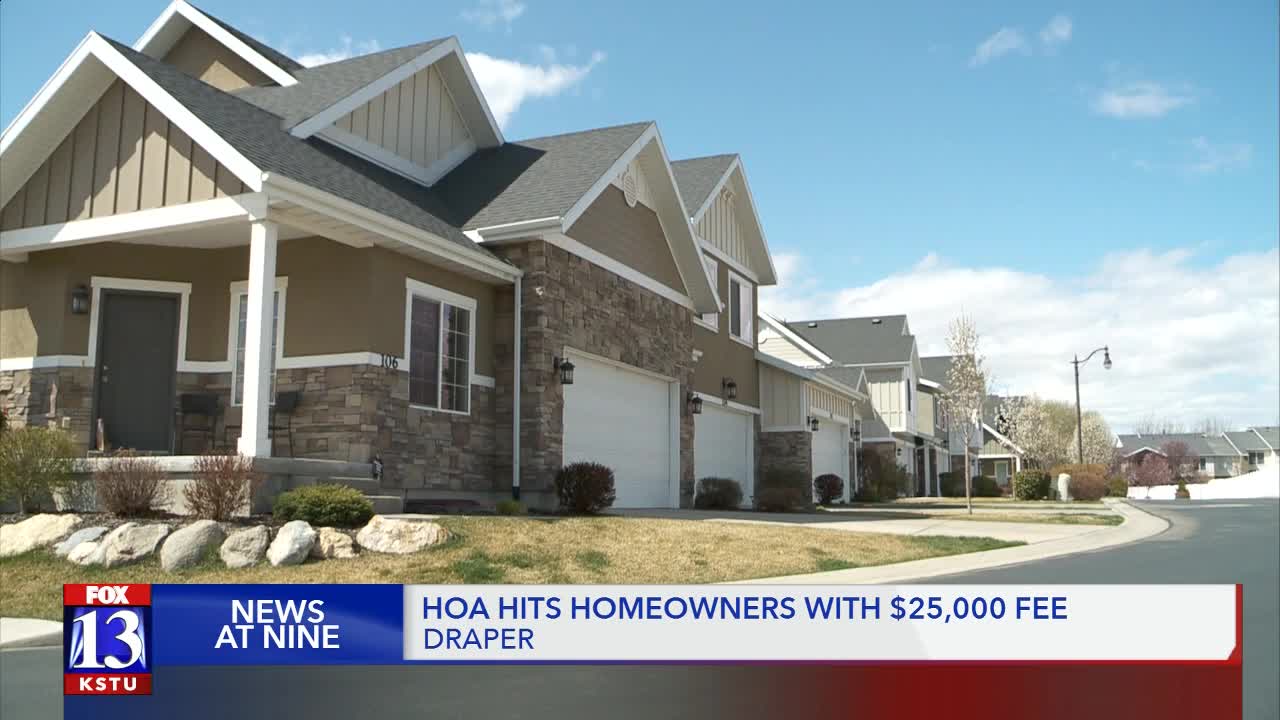 The Village at Draper Hills homeowner’s association is asking all of its residents to pay a $25,000 construction fee this month despite Governor Gary Herbert’s implementation of eviction freezes and rent deferrals.

DRAPER, Utah — The Villages on Draper Hills homeowner’s association is asking all of its residents to pay a $25,000 construction fee this month despite Governor Gary Herbert’s implementation of eviction freezes and rent deferrals for people across Utah who are struggling to pay their bills during the COVID-19 pandemic.

The HOA board said the money will go towards fixing problems with many of the 75 townhomes in the Draper community that are susceptible to water damage. The repairs would total approximately $2 million.

Gary Giancola, the acting president of the HOA board, said he believes the project cannot be postponed or else the repairs from potential water damage will be even more expensive.

“Unfortunately most of the people in here feel like they’re living in terror because the information that has been communicated is, ‘The sky is falling. Your homes are going to fall down. You’re going to have mold,’” homeowner Janice Tabish said. “I don’t think (the board) is really concerned about us.”

Tabish is just one of several homeowners who tell FOX 13 they are frustrated with the proposed repairs and fees. She said her home was inspected, revealing no damage.

They are now asking for the HOA board to perform a more thorough investigation.

Although each homeowner is required to pay $25,000, not all of the units will receive repairs under the currently proposed plan.

“A pandemic right now is not exactly the best time for this!” homeowner Tamara Gaffney said. “To me it didn’t seem like that big of a deal. I actually don’t believe that it’s fully necessary, but I’m not a contractor… It always helps to have a second opinion when you’re going to pay $2 million.”

Homeowners tell FOX 13 the HOA board refused to get that second opinion, instead hiring J2 Building Consultants – a company in Washington that would fly in some out-of-state workers.

“It seems like this company has a lot of expertise,” Gaffney said. “Our concern with Washington right now is they’re having a really really bad coronavirus outbreak. The fact is they don’t actually allow construction to go on in their state.”

“That’s my biggest concern,” homeowner Lenore Byrnes said. “I’m afraid really because of the COVID-19 virus… I think most people would agree there needs to be some remediation but we just don’t know how much.”

Both Gaffney and Byrnes said their townhomes were not inspected.

According to a J2 Building Consultants report published in July 2019, only five units within the community received an “invasive inspection.”

The full report can be read here.

Jim Kessler, who compiled the report, told FOX 13 that the results of a second investigation were published in February 2020 in which four additional units received similar inspections. Kessler said he visually reviewed the remaining 66 units from the outside.

The investigation performed by J2 Building Consultants concluded repairs would only be performed in the buildings put up by Brad Reynolds Construction during phase two of the community’s development between 2011 and 2013.

“The issues were systemic,” Kessler said. “Ultimately it comes down to adverse effects, so I can’t necessarily point my finger and say (Brad Reynolds Construction) did a bad thing.”

According to a letter signed by Brad Reynolds, he does not trust the estimated repair fees or integrity of J2 Building Consultants.

“I understand from my attorneys and from others in the industry that J2 has been involved in a number of failed lawsuits in Daybreak that have resulted in HOAs losing hundreds of thousands of dollars in attorney fees and recovering nothing,” Reynolds wrote. “I also understand that in each of those cases, multiple professional construction inspectors found, after conducting their own independent evaluations, that actual repair costs were far less than J2’s proposals. Therefore, I proposed that the Board meet with me to identify an independent third-party construction consultant that all involved could agree upon. I even offered to help subsidize that investigation. The Board ignored these concerns and even excluded me from the J2 investigation process.”

“I don’t have any response to Brad or his company,” Kessler said. “In the cases that he references, some of them are ongoing so I can’t really speak to any of that.”

Giancola told FOX 13 he could not comment on the HOA’s decision whether to seek a second opinion on the proposed repairs.

“When we ask (the board), ‘What’s going to happen when homeowners can’t pay?’ the answer back was really heartless. It was, ‘Well, move out,’” Gaffney said. “I actually have put my place up for sale because I am worried… They’ve told us they would automatically put us into a loan program if we were unable to pay the full amount.”

Gaffney said she and other homeowners have tried to seek advice from counsel and have filed complaints with both the city of Draper and the Utah Attorney General’s office.

“Everywhere we go, everyone tells us buyer beware. Know what your HOA rules are and make sure you don’t buy in a community that’s going to have a problem,” Gaffney said. “(Giancola) said this is a thing that’s going to happen all across Utah… What I’m worried about moreso than anything else is what happens to our state and communities where people are forced into these types of situations.”

“This is my first experience and it surprises me how hard it is for a homeowner to live in an HOA community,” Tabish said.

Giancola and other members of the HOA board live in the community they represent. He has declined all on-camera interviews at this time, stating he may be willing to address the situation at a later date.

A previous version of this story included a quote from homeowner Jan Tabish stating her home was never inspected. Further investigation has revealed her home did, in fact, receive an "invasive inspection" by J2 Building Consultants.

Tabish said the inspection revealed no damage. Her home was not built by Brad Reynolds Construction. She said she is upset with the idea of having to pay $25,000 for repairs that her home will not receive.

FOX 13 has not yet received a February 2020 report detailing the results of the inspection.