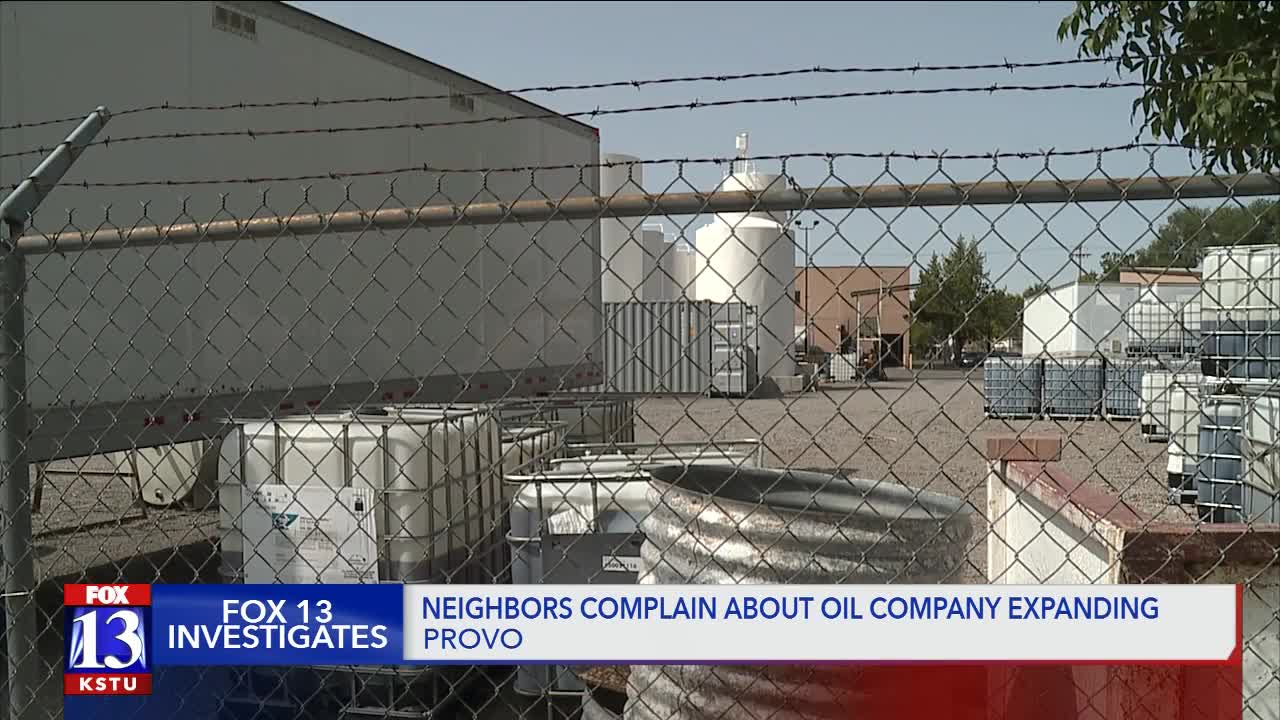 Homeowners in Provo are attempting to battle an oil company that stores material just feet away from their backyards.

PROVO, Utah — Homeowners in Provo are attempting to battle an oil company that stores material just feet away from their backyards.

Neighbors told FOX 13 they have concerns about their safety, their property values, and the bad smell that carries throughout the area each summer.

Christensen Oil has been operating in Provo for decades and has been grandfathered into the Maeser neighborhood for zoning purposes.

Rachel Favero, a member of Maeser Neighbors for Safety, said she's particularly concerned about neighborhood evacuations if something went wrong.

"If one thing goes wrong, then it's a domino effect," Favero said. "It's not even safe for their own employees!"

"I just feel like it's unsafe, and it's ridiculous!" neighbor Carolina Allen said. "It keeps people from moving here."

The group also expressed concerns about Christensen Oil's failure to meet the latest fire codes in many of their buildings.

Lynn Schofield, the Provo fire marshal, indicated each of the company's buildings are only required to meet the fire code corresponding to the year it was built.

"I don't stay up at night worrying about Christensen Oil. I don't. They run a very very safe operation," Schofield said. "They've had more inspections in the last year than probably any other business in Provo."

Schofield said inspections in Provo are based on a standard published every three years by the International Code Council (ICC).

"The code does not attempt to achieve perfection by requiring every conceivable or available safeguard for every structure, premises, or operation within the scope of the code," Schofield said, reading from his ICC International Fire Code (IFC)-2018 manual. "Rather, the code seeks to establish a minimum acceptable safety level to balance the many factors that must be considered."

Although the ICC IFC-2018 gives specific distances as part of its regulations, Schofield said he typically relies on his own personal training and experience while conducting an inspection.

He agreed there is a degree of "personal interpretation and subjectivity" to the inspection process.

"I don't take a tape measure with me when I inspect any building, and the reason is because my 29 years of knowledge and experience as a firefighter... helps me understand what is a risk and what is not a risk," Schofield said. "Sometimes you may be a few inches different."

FOX 13 asked if that was a legal liability.

Watch: Provo fire marshal says he'd rather trust his 29 years of experience than a tape measure when conducting an inspection.

"Is that a liability in any way? Legally?"

Schofield went on to say he is confident each of the buildings at Christensen Oil meet the fire codes corresponding to the years in which they were built.

"I don't think one person who has been 'in the business' for tons of years should trump the hundreds of people who went into writing the fire code," Favero said.

Neighbors also said they disagree with the Provo Fire Department's interpretation of how Christensen Oil must only meet a minimum and "antiquated" safety standard corresponding to the year in which each building was constructed.

"All we are asking is for the law, as it currently exists, to be enforced," Favero said. "If we just keep making an exception on every single corner and every single tank being put in, we're taking away all of those safety precautions... Half of the hazardous materials that exist here didn't even exist in 1953, so how could that be properly regulating them?"

Melissa Platt, an attorney representing Christensen Oil, said many of the issues raised by Maeser Neighbors for Safety were already litigated in 1999 when the city of Provo filed a lawsuit against the company.

"The judge ruled on summary judgment in favor of Christensen Oil," Platt said.

Although the 1999 lawsuit did not involve fire codes, Schofield said the lawsuit set the required distance Christensen Oil must keep materials away from homeowners' property lines.

"The fire code does not trump that lawsuit," Schofield said. "The homes were there before Christensen Oil was, but the property owners were not... What is it called when you buy a used car? It's buyer beware."

Earlier this year, the Provo City Council approved Christensen Oil's request to allow the storage of an additional 110,000 gallons of oil and gasoline.

"We're not opposed to Christensen Oil being a successful company, but them expanding within a residential neighborhood is a problem," Favero said.

Schofield reiterated any new buildings will be required to meet current fire code.