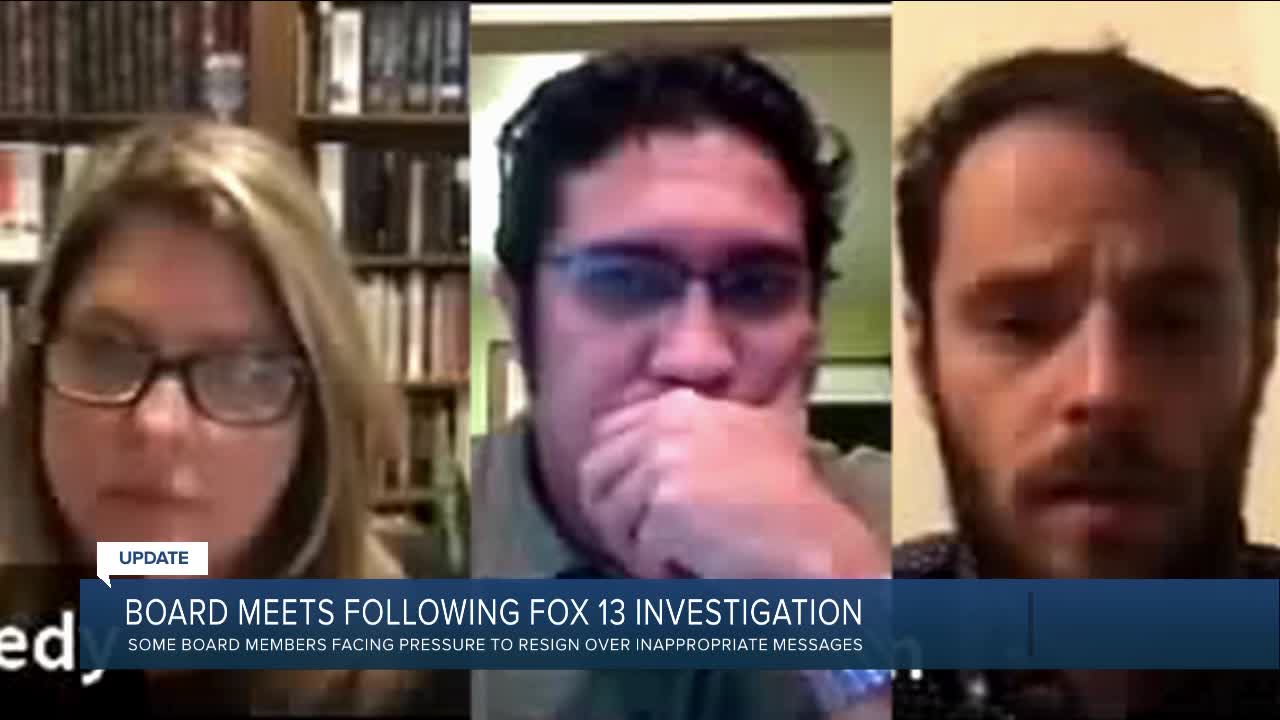 The Salt Lake City School District held a meeting Tuesday, where among other topics, the messages uncovered in a FOX 13 investigative report were brought up a few times. 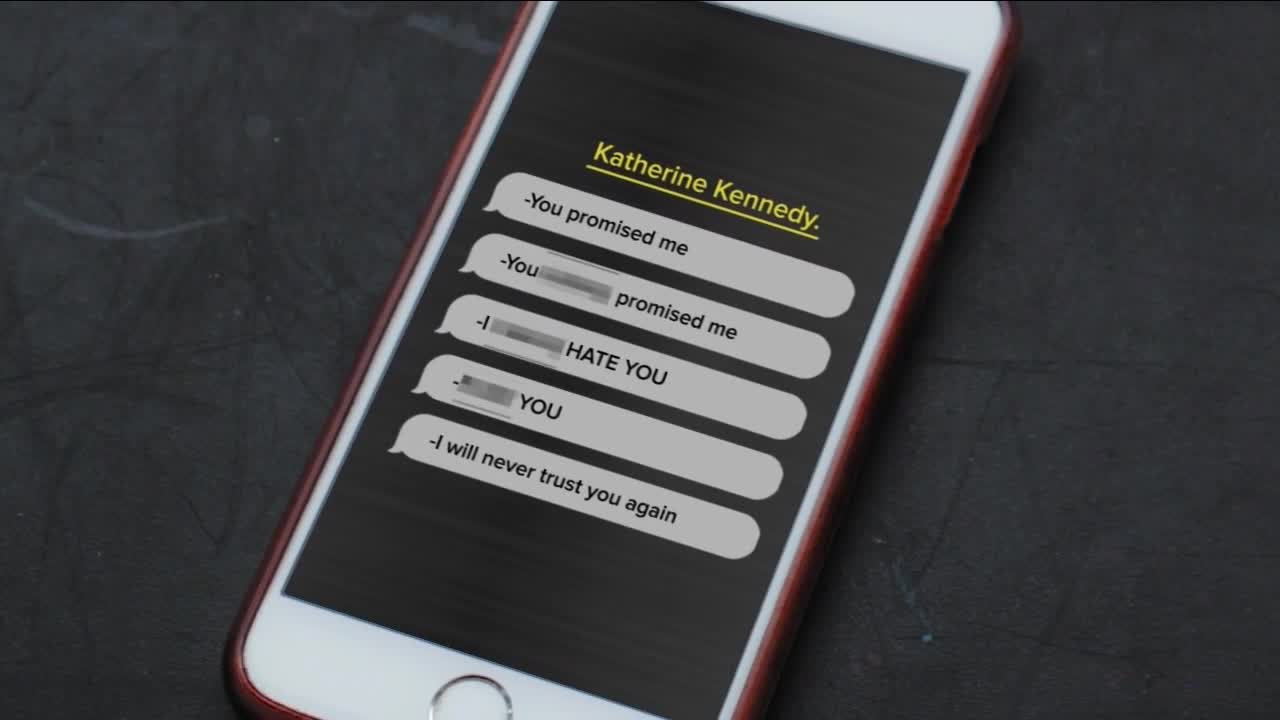 SALT LAKE CITY — The Salt Lake City School District is dealing with the fallout of a FOX 13 investigation that revealed dozens of inappropriate messages sent between board members.

The board held its regularly scheduled meeting on Tuesday night.

According to the meeting agenda, the board was set to go into closed session at 5:30 p.m. to discuss potential litigation and to discuss the “character, professional competence, or mental health of an individual.”

The board later decided not to meet in closed session because, according to board member Kristi Swett, "there are not any topics to discuss."

Mike Nemelka says he believes the SLC School District board did not go into closed session last night, partly because they were worried by this letter sent in by @FOX13. https://t.co/QkxbwdmNVP

Prior to the meeting, sources confirmed there would be public pressure from parents — and internal pressure from board members — asking for some of the trustees to hand in their resignation.

Although more than a dozen members of the public registered to give public comment, the board only allowed five to speak. Some of these same parents were privately mocked, called names, and made fun of by board members Nate Salazar and Sam Hanson according to records obtained by FOX 13.

"We've seen division, dysfunction, manipulation, and political motivations that create pawns of our students. It is clear from the news reports yesterday and today that the dysfunction and immaturity of board members has created an environment where board members have been unwilling to listen," said mother Molly Pearce. "I am disgusted at these actions. In light of most recent news coverage, it seems like many on our board are ill-equipped and possibly breaching ethical codes and board policies. I ask of those who are in violation of these terms to respectfully resign."

“I thought that the behaviors were a little bit disappointing,” said father Chris Hatch. “It was not something I would tolerate in my office nor would my customers tolerate from me.”

"These are difficult times, and none of us are at our best right now," said Amy Fehlberg. "I encourage you to do exactly what we would ask our students to do: acknowledge this with authenticity."

Board member Michael Nemelka announced during the meeting that he would be filing a formal complaint against board members Kennedy, Salazar, and Hanson.

"I am going to use the investigative report that FOX (13) News prepared as evidence," Nemelka stated. "I want you three to know you have negated any positive decisions this board has made and made us a laughing stock of this whole state... I am disgusted by the way you acted and the things you did in secret."

Neither Kennedy, Salazar, nor Hanson responded. They have all declined multiple FOX 13 requests for comment.

BREAKING - Board member Mike Nemelka says he will be filing a complaint against Katherine Kennedy, Nate Salazar, and Sam Hanson due to their unprofessional behavior uncovered by @FOX13. pic.twitter.com/F7Kcy8v82a

These are the three board members that Mike Nemelka has asked to hand in their resignation + the looks on their faces as they listened to Nemelka question their unprofessional behavior uncovered by @fox13.https://t.co/O102cy4viY pic.twitter.com/8zAECtbxwA

As FOX 13’s investigation revealed, some of the messages exchanged between board members were more than just profane. Multiple experts have confirmed that members of the SLCSD board likely violated state laws.

Nemelka was particularly concerned about emails sent by Kennedy to the rest of the school board which intentionally excluded him.

"Unfortunately the lesson that the school board is teaching here -- to students, and to faculty, and to parents -- is that it's okay to violate the law, and civility is out the door," Campbell said. "I’m really concerned that there’s a lack of understanding about the Utah Open and Public Meetings Act in our state... I was involved when they changed the law to include these electronic meetings. Thank goodness we have it in place for the pandemic. I think it’s being abused."

David Reymann, a First Amendment attorney, said he agreed with both Campbell and Nemelka's concerns.

"Stories like this, exposing the conduct of public bodies when they violate the (Open and Public Meetings Act) are very important," Reymann said. "You can’t circumvent the act just by communicating electronically behind the scenes."

Reymann said he was especially concerned with the district's failure to implement a policy requiring board members to maintain public records.

At least five of the seven SLCSD board members either did not provide text messages or provided incomplete copies of their messages. Board members Kristi Swett and Melissa Ford seemed to be in full compliance.

“Honestly, I delete all my text messages, and that’s just out of habit,” board member Michelle Tuitupou said. “That’s not because of the board stuff. I’ve always done that.”

"(Board members) should not be deleting texts from their phones," Reymann said.

"There really should be standards for public officials to retain their messages, particularly when they deal with public business," Campbell agreed. "That's a breach of trust... They ought to know the law, and they’re supposed to have training on the law, and the law is pretty clear."

The Utah State Board of Education has also responded to FOX 13’s investigation. A spokesperson sent the following statement:

“We have no comment on the behavior of individual members of a locally-elected board. Any issues involving Open Meetings or GRAMA would fall under the jurisdiction of the State Attorney General.”

Multiple parents have told FOX 13 they spent the day on the phone with the Utah Attorney General’s Office and that Sean Reyes is personally aware of the situation. It’s unclear whether the AG’s Office will open a formal investigation looking into criminal charges.

A spokesperson for the Attorney General's Office confirmed employees will "start inquiring right away."