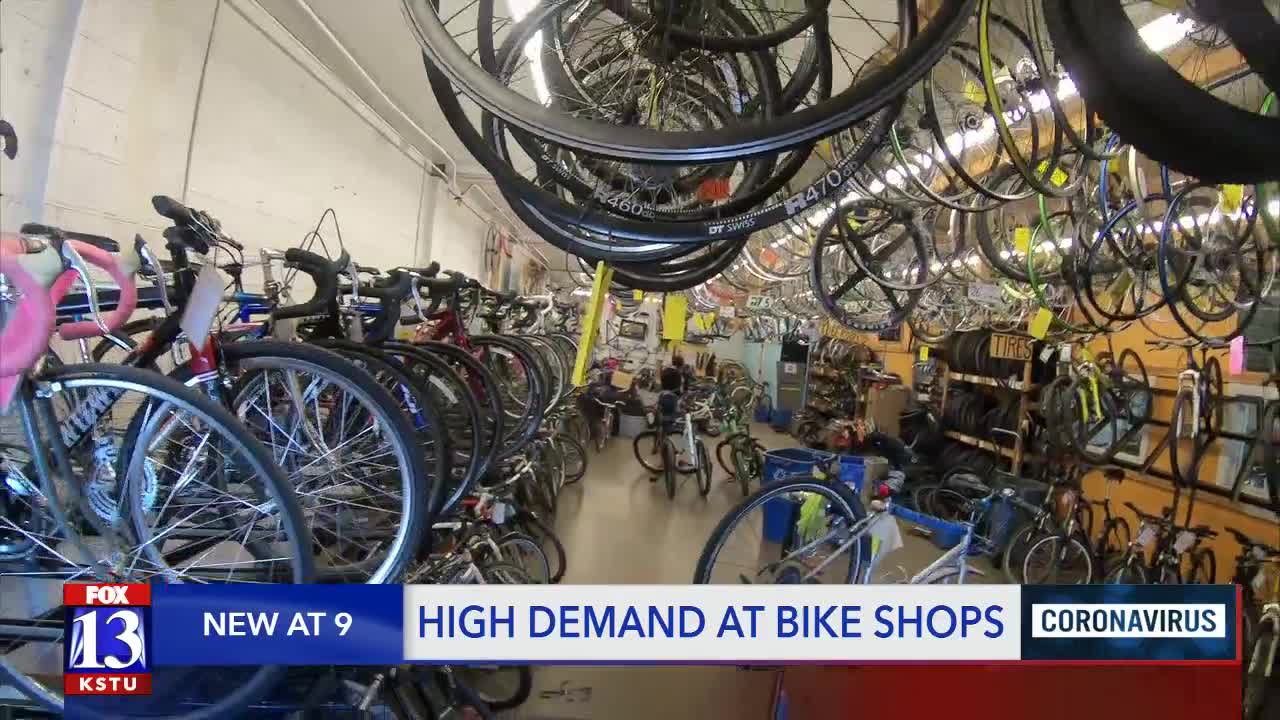 As the pandemic sent Utahns out of gyms and into their homes, local bike shops are trying to keep up with an influx in demand as they adapt to changing times.

SALT LAKE CITY — As the pandemic sent Utahns out of gyms and into their homes, local bike shops are trying to keep up with an influx in demand as they adapt to changing times.

Whether it’s fixing up a customer’s bike, or refurbishing and donating or selling an old one – when it comes to bicycle thrift shopping, Salt Lake City Bicycle Collective has been a long-time local go-to.

“Great price,” a cashier said to a customer as he rang up his new, used bike. “Your total today is going to be $533.22,” the cashier said of the estimated 12 to 18-hundred dollar bike.

“What we do is we operate a bicycle thrift store where people can come and buy refurbished bikes and used bike parts,” explained Kai Cox, location director of SLC Bicycle Collective. “The other half of what we do is we’ve got a group of volunteers who fix up bikes to give away to folks in need so we provide bikes to low income folks, folks without transportation and underprivileged youth in the valley.”

For the last month, their team has been in high gear.

“I am selling between 25 and 35 bikes a week,” Cox said. “The demand for bicycles has been so high since gyms and most state parks, most recreation has been closed.”

“It will be call after call after call, I mean I’m probably getting 15 emails [right now],” he continued as he sat on the floor fixing a bicycle wheel.

Six weeks ago, when the pandemic started, SLC Bicycle Collective had to shut their doors. Four weeks ago, following high demand, they reopened with changes.

Cox said they implemented an appointment system, so people can come browse the selection in person while maintaining social distancing. They have also started posting pictures of their bikes to social media and their website, so people can browse from home before setting up appointments for a test ride.

“[We’re doing] as much as we can, I mean the volume of requests has been huge,” said Cox.

The organization use to allow riders to come in and learn how to fix their own bikes, now they are doing tune ups and fixes for people and trying to provide parts to people who need to get their bikes up and running as quickly as possible.

“Since the pandemic started, really the biggest [change] is that we’re not able to host our normal volunteer times, normally in this space we’d have work benches set up and either members of the community could come in and work on their own bike or our volunteers could come in and work on bikes that we give away because we have not been able to have gatherings of people because of the gathering restrictions,” Cox explained.

They have been learning to adapt, but amid all of the COVID-19 changes, it’s been a vicious cycle.

“Our ability to meet costumers demand has been kind of restricted by our appointment system, so the demand is very high – higher than usual this time of year, almost double,” said Cox. “You know, everybody just gets to wait their turn in line.”

Cox said “only time will tell” if they will be able to continue to keep up with the demand for bike sales and donations -- but they are doing everything they can to ensure the general public and underprivileged community is being served, even if there are a few speed bumps along the way.

Bicycle Collective is a non-profit organization. If you would like to make a donation -- whether it be an old bicycle, monetary, or your time – you can find more information HERE.