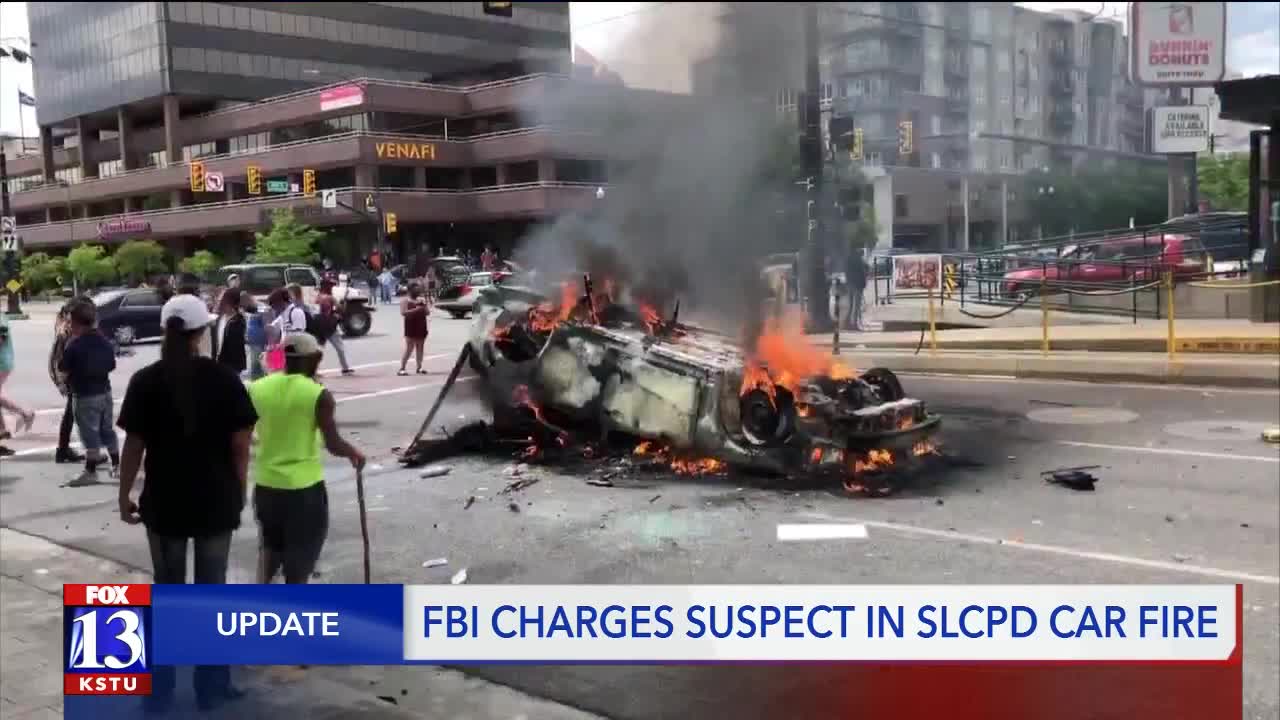 SALT LAKE CITY — The FBI and Department of Justice have announced the arrest of a third suspect accused of setting a Salt Lake City Police Department car on fire during the May 30th protests.

The suspect was identified as Christopher Rojas.

A FOX 13 investigation has revealed Rojas spoke to the media about the importance of avoiding confrontation just two days after the incident.

Rojas held signs and complimented the Logan Police Department after Chief Gary Jensen dropped off pizza at a peaceful rally on June 2nd.

“I decided to just take it upon myself to see if people would come out!” Rojas said that day. “Our rules are if we get verbal abuse, we say kind words back. If we get ‘the finger,’ we just give them a peace sign back.”

United States Attorney John Huber said Rojas was anything but peaceful just a few days prior, referring to him as an “opportunist and extremist” who hijacked an otherwise peaceful message.

“Utah will remain a state of law and order, regardless of what fit of ‘courageousness’ you feel you have if you confront and abuse the police on a certain afternoon,” Huber said. “They were there to commit crimes. That was their main purpose… Those were not protesters. Those were rioters.”

At a press conference on Thursday, the FBI said videos taken on May 30th will prove Rojas worked with another suspect to set the SLCPD car on fire.

“ROJAS is holding a cigarette lighter in his hands while standing next to an African American man wearing a black Nike hoodie and black Nike sweatpants,” wrote FBI Special Agent Jeffrey T. Wright. “The African American man is wearing a gasmask on his face. The man wearing the gasmask is holding white fabric, perhaps a tablecloth or bedsheet. ROJAS and the man wearing the gasmask work together to light the white fabric on fire… Once the fabric begins to burn, the man in the gasmask throws the burning fabric towards the overturned patrol car.”

The second suspect has not yet been identified. The FBI is offering a $12,500 reward for information that leads to his arrest.

A similar tip from the public led the FBI to Rojas. He now faces the potential of a minimum of five years or maximum of 20 years in federal prison.

“There is consequence. It’s what our mothers taught us, and it remains true today,” Huber said. “Think of the symbolism of a burning police cruiser toppled in the middle of the heart of the city. That’s an image that we can’t get out of our mind."