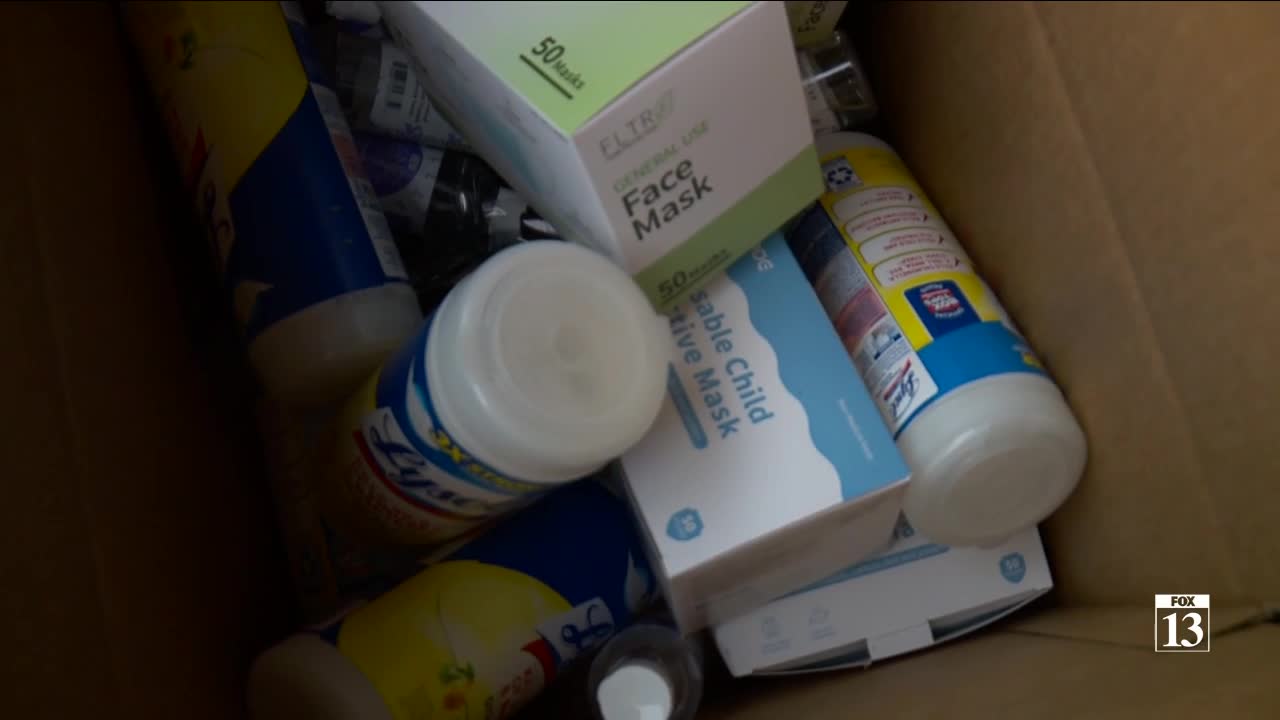 Davis School District parents are making sure teachers now working four days a week with double the class size have enough sanitation and protective supplies in the classroom.

They've put together a personal protective equipment (PPE) donation drive with a goal of gathering items for every single one of the district's dozens of elementary schools.

On Tuesday, Stephanie Saez's kids played in the driveway. Three of her children attend Eagle Bay Elementary School and had just completed their second day of the new class schedule.

"They're excited to be back with their friends and learning full time," she said. But Saez said she is a bit nervous.

"I live with my parents to help them out because they have health issues," she explained. "With my kids coming home, I don't want them bringing home germs."

As her kids played in the driveway, on Saez's porch sat a box with a sign on it that read: "PPE DRIVE Davis County Elementary Schools." It asked for masks, Lysol wipes and hand sanitizer.

Saez is collecting sanitation supplies for her kids' school after she heard about a newly formed PPE drive.

"Why not do it just to help out the community?" she thought.

The donation drive came about after last week's controversial Davis School District Board of Education decision to move all elementary schools from a hybrid schedule to four-day in-person classes.

"I think they were put in a tight spot just with the speed of decisions and the game plan always changing," Everton said of the elementary school teachers. "This is a hard year for them."

She said she wanted to do something as a community to support the teachers and keep them safe and healthy, and felt this was one thing she could do — give them supplies to keep classrooms cleaner.

The Davis School District said they have also upped their offerings for safety in classrooms, like bringing in more than 2,500 Plexiglas barriers.

District spokesman Chris Williams said they ordered one for each of the 1,300 self-identified high-risk teachers and will have plenty to spare for anyone else who wants one.

On top of that, they have a warehouse of supplies.

"We are definitely in the throes of doing everything we can to make sure that we keep our teachers as safe as possible," he said.

But he indicated that doesn't mean a donation drive isn't helpful.

He mentioned that one of their orders for masks didn't arrive when it was supposed to, forcing the district to quickly order more from another supplier.

"We appreciate any effort," Williams said of the donations. "Whether it be this group, whether it be anyone who wants to provide masks or hand sanitizers."

Everton said she's been reaching out to elementary schools individually to see what they need.

Her goal is to make sure every single elementary school in the district gets supplies and that teachers know the community loves them and is here to help them.

Whether people like the new schedule or not, Everton said they can all agree that they want teachers to be safe.

"I know that's going to be harder with more students in the classrooms," she said. "And this is one thing we can do to support them and to help with that transition."

Everton has set up dozens of site coordinators in various Davis School District communities so that parents and community members are able to find a drop off site close by.

She plans to continue the donation drive until Oct. 9, at which point site coordinators will deliver the supplies to designated schools.

Click here to learn more about the PPE Donation Drive.