Secondary students to move to 4-day in person class Nov. 2 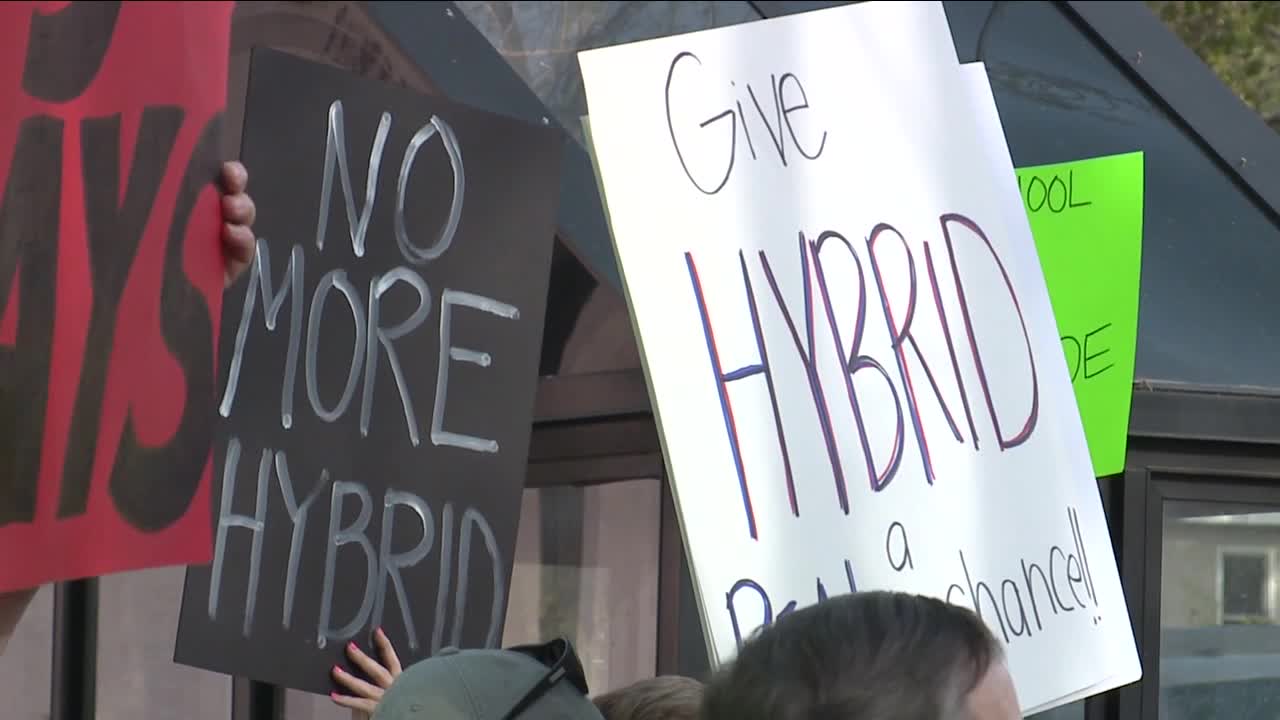 The plans come as the district decided to abandon their hybrid learning plan and pursue additional in person classes for all students.

Not all parents and teachers were thrilled about this change, with many claiming the switch was coming too soon. Some parents started a petition to try and keep the hybrid schedule in place.

Chris Williams, spokesperson for the Davis School District, explained that the board called Wednesday's special meeting after their vote last week to move all schools in the district to a four-day in-person week.

"That decision was made two days prior to [COVID-19] numbers going through the roof in Utah," he said.

More than two hours before Wednesday's meeting, parents, teachers and students began to line up outside of district office. Many held signs and encouraged cars passing by to honk in support.

On one side, people supported moving to a four-day in-person week.

Brittanie Flint, whose three children attend schools in the district, said her oldest son has been struggling with online learning. She said it has severely affected his grades.

"Hybrid isn't what's good for my family," she said. "That's not what I would choose."

Others supported the opposite-- staying the course and keeping all schools on a hybrid schedule.

Samantha Wursten, who showed up to the meeting with her elementary school daughters Ella and Lucy, said they have loved the hybrid schedule. Currently, her daughters attend school for two days, then learn from home two days.

"Of course we want to do four days, at some point we definitely want to," Wursten said. "We just don't feel like now is the time while numbers are spiking."

So many people showed up to the meeting, that many of them spilled onto the sidewalk and listened to the meeting on their phones.

The school board allowed 18 minutes of public comment, and heard from a variety of people expressing varying opinions.

"We will not be able to social distance at all if they go back to the four day a week," said parent Wendy Garcia.

"I will not feel safe going back to school with a full student body," student Sarah Willard said. "My school has over 2,000 students."

"The hybrid doesn't work for elementary-age students and for students that I teach in special education," explained teacher Cameron Halverson.

"His online work is a total nightmare," mother Brandi McFarland said, about her son's frustrations with online learning. "His assignments won't open properly, tests aren't saving he's having to re-do things over and over."

The school board then deliberated on the decision, discussing the most current COVID-19 data and what they've heard from their constituents.

Some questioned what would happen if they double the numbers of students in halls and at lunch. Others talked about the value of the hybrid schedule in keeping quarantine numbers with the district down.

But most board members talked about how data shows that there are lower numbers of quarantine and COVID-19 within the elementary schools. They described feeling comfortable re-opening those schools to in-person learning four days a week beginning Monday, while holding off on middle schools and high schools.

In the end that's how most of the board voted, with Davis School Board President John Robison voting against the plan.

Under the new plan, secondary students will continue with hybrid learning until the beginning of their second term, which starts on November 2.

The district agreed to keep monitoring COVID-19 among students and staff as these new plans begin. The district also said it purchased hundreds of Plexiglas barriers to install in classrooms where social distancing isn't possible.