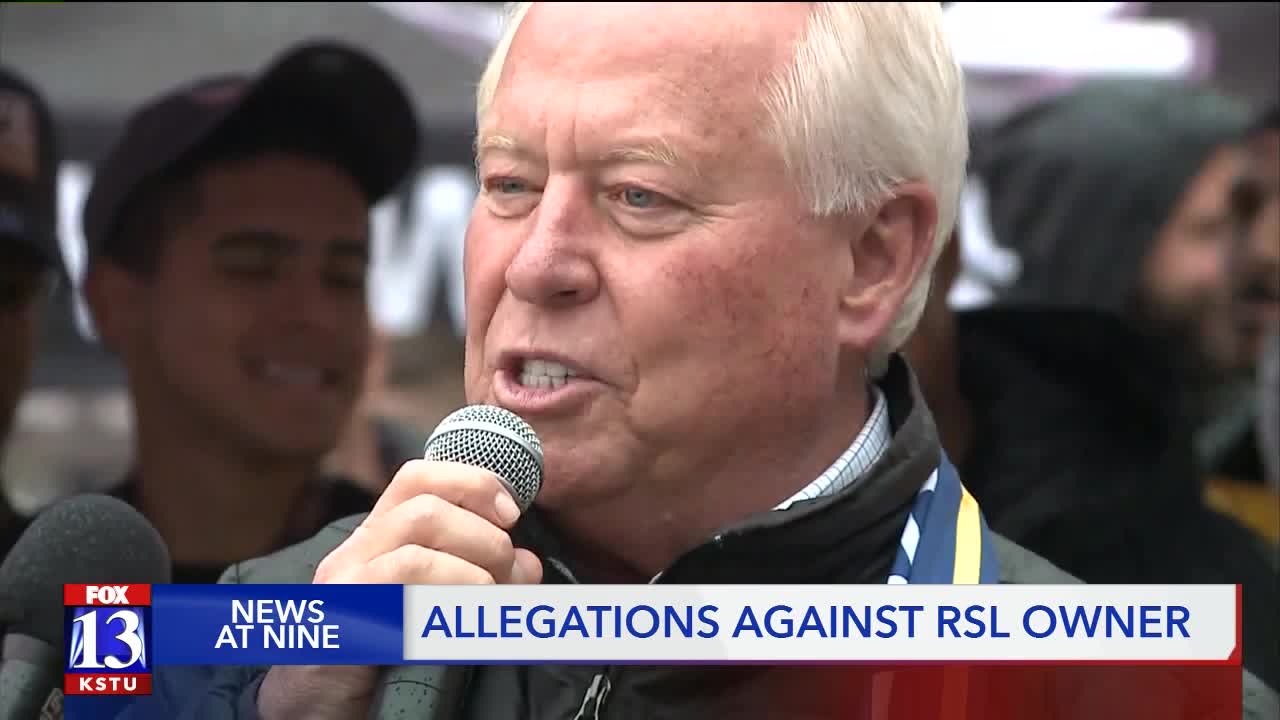 The accusations are surfacing on the day RSL announced Hansen is taking a leave of absence from the soccer organization, and one day after a report that claims Hansen has made racist remarks toward RSL players and staff.

That report sparked an MLS investigation into Hansen.

Three separate people who each say they attended the early 2019 event, recounted the same story to Fox 13.

They each wished to remain anonymous, because one person still works for the company and another currently does work connected to RSL.

For the purposes of the article, we'll refer to the two employees who interviewed as John and Robert.

The three described how Wasatch Group and MarketStar threw a big kickoff party in Ogden. Dell Loy Hansen took the stage, they said, and gave a speech.

He talked about a loan program the company offers, and they said Hansen launched into a story about a woman of color taking advantage of that loan program.

"He said, 'You know I have this quote "colored lady" who was very excited to get this assistance that we were giving,'" John recounted. "And then proceeded to do a type of reenactment of this lady as a... basically as a Black, southern lady, telling the story of how much she loved Dell Loy and all the stuff that he's done for her."

Robert said it caught everyone off guard.

"He was actually saying it in a way that she would say it, which is kind of offensive, you know," Robert said. "He was like trying to talk like how a Black lady would speak."

John described how there was a lot of disbelief in the crowd, and his co-workers expressed being disturbed by it.

"I remember turning to my boss and saying, 'Is this really happening?'" John remembered. "And [my boss said] exact quote, 'Well, he's from Logan. And, he's old school.' So, it was just shocking. You literally could hear a pin drop when he was done."

They said hundreds of people saw Hansen's speech, both in-person in the auditorium and through a video feed of from out-of-state offices.

Robert explained how he questioned why Hansen would bring the woman's race up when telling the story, and try to speak in a certain slang. He called it inappropriate.

John said he was certain that people complained to HR about the incident.

"It was very disappointing to find out this person had just purchased our company, and this is the way he was acting on stage," John said. "It was just very offsetting."

The third employee told Fox 13 that the comments made them concerned that other people would be offended.

John and Robert eventually each left MarketStar and now work at other jobs. They talked about more or less forgetting the speech.

That is until the allegations against Hansen by RSL staff came out on Thursday.

It immediately brought that MarketStar event to mind.

"With current events and the whole BLM thing that's going on right now, it's just really important to be mindful of that," Robert said.

Fox 13 reached out to RSL to speak to Hansen about the allegations, and the team responded with the statement that Hansen is taking a leave of absence.

Fox 13 attempted to reach Hansen through other means.

According to a press release online, Wasatch Group acquired MarketStar in March of 2019, right around the time that the employees said they attended the event.

MarketStar responded to Fox 13 with a statement about the event, which reads:

Regarding the company meeting, Mr. Hansen did speak at our employee event and made the comments noted. The event purpose was to announce MarketStar being acquired by the Wasatch Group. Mr. Hansen introduced several new employee benefits programs being made available to all MarketStar employees and conveyed that one recipient of the benefits expressed that she was grateful and excited about the programs.

MarketStar leadership addressed these comments directly with Mr. Hansen. We look forward to continued partnership with Mr. Hansen and others in the community to advance this important dialogue and do our part to improve our society.

At MarketStar, we are proud to have a culture that is based on mutual respect and accountability. Two of our core values – “We Care” and “You Belong” – confirm our commitment to accept, respect, and honor everyone we work and interact with. We embrace diverse backgrounds, encourage diverse points of view, and provide opportunities for employees to share their experiences and stories.

How we build a more inclusive society is up to all of us. Open communication, active listening, and taking action when needed are our most effective tools.

MarketStar clarified that leadership addressed the comments with Hansen after the event took place.