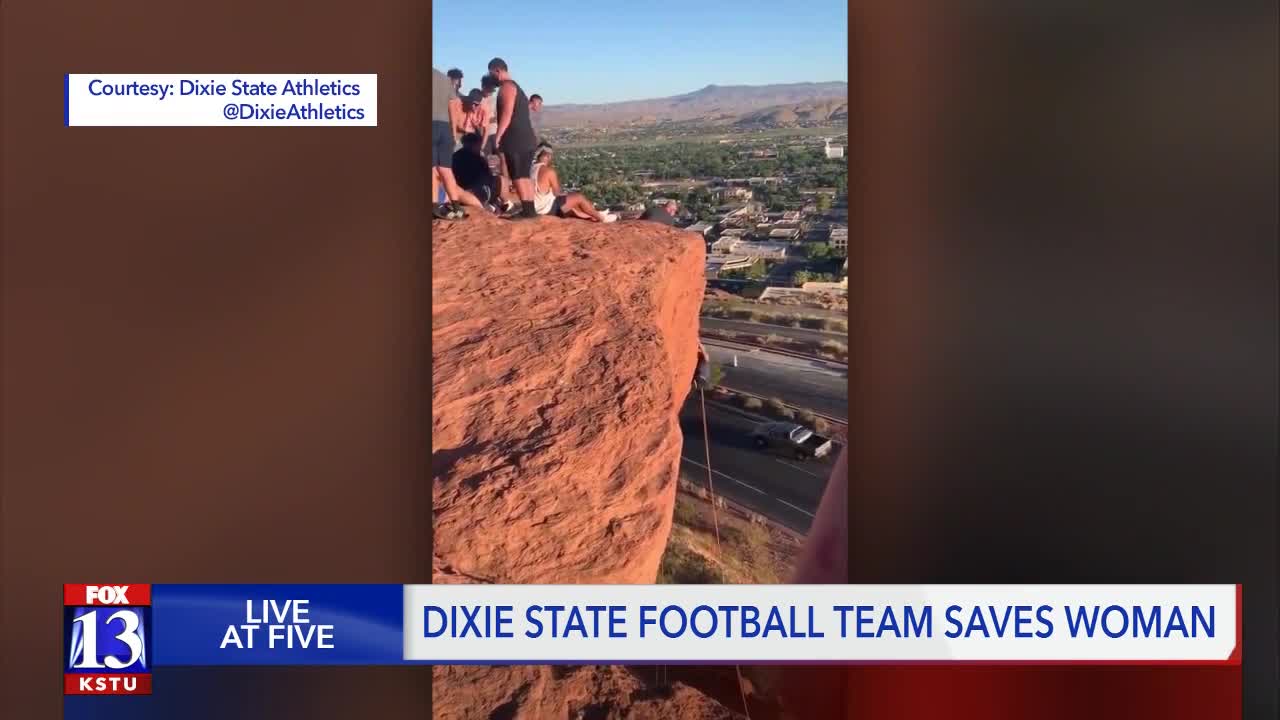 The Dixie State football team just happened to be in the right place at the right time Friday.

ST. GEORGE, Utah – The Dixie State football team just happened to be in the right place at the right time Friday.

Head coach Paul Peterson scheduled a team meeting at the iconic Dixie Rock to discuss the upcoming season and the importance of the team to its community.

“Every year I take the team up to Dixie Rock. It has a great view of the city,” Peterson said. “I like telling my guys to look out to see what they represent.”

As the meeting was getting underway around sunset, the partner of a woman rappelling the rock called for assistance. The woman who was rappelling somehow got her hair tangled in her equipment and was stuck dangling from the rock.

A girl propelling down the Dixie Rock got her hair tangled in the rope and was stuck hanging midway down the mountain. Our guys jumped in and pulled her to the rescue. Love this team! #savinglives #nobiggie #OnTheRise @DixieState_FB pic.twitter.com/zsJtglzXmM

“It was scary for a minute,” said Deven Osborne, a senior wide receiver on the team. “We got up there, we seen a lady off the side of the cliff hanging and her hair was stuck to the rope. We were like, ‘what’s going on?’”

Despite being high above the ground and at the edge of a cliff with an unforgiving drop, the team wasted little time coming to the woman’s aid.

“As fast as they asked us,” Peterson said.

Several members of the team grabbed on to a rope and helped pull the woman to safety.

We had no idea that God put us here to pull a young lady to safety today. The boys where quick to react and willing to lend a hand. We coaching HEROS here at Dixie State baby!!! By the way that man with the grey shirt jumped in with no ropes to secure him. RESPECT!!!#OnTheRise pic.twitter.com/xEy9tJKVDp

“God put us in the right place, at the right time,” Osborne said.

Peterson is proud of the selflessness exhibited by those who sprang into action.

“The reason why we are up there is to show what we represent. We had a chance to help somebody,” Peterson said.

2020 is a year of challenges. With a cloud hanging over this season because of cancellations caused by the coronavirus pandemic, this incident is putting everything into perspective.

“At the end of the day, life is more important,” Osborne said.

No matter how many games the Trailblazers win or lose this season, the team may have already earned a victory that can’t be topped.

“We love playing football, we love going out there hitting each other, having fun,” Osborne said. “There is a game outside of the game. We want to be the best men we can possibly be.”