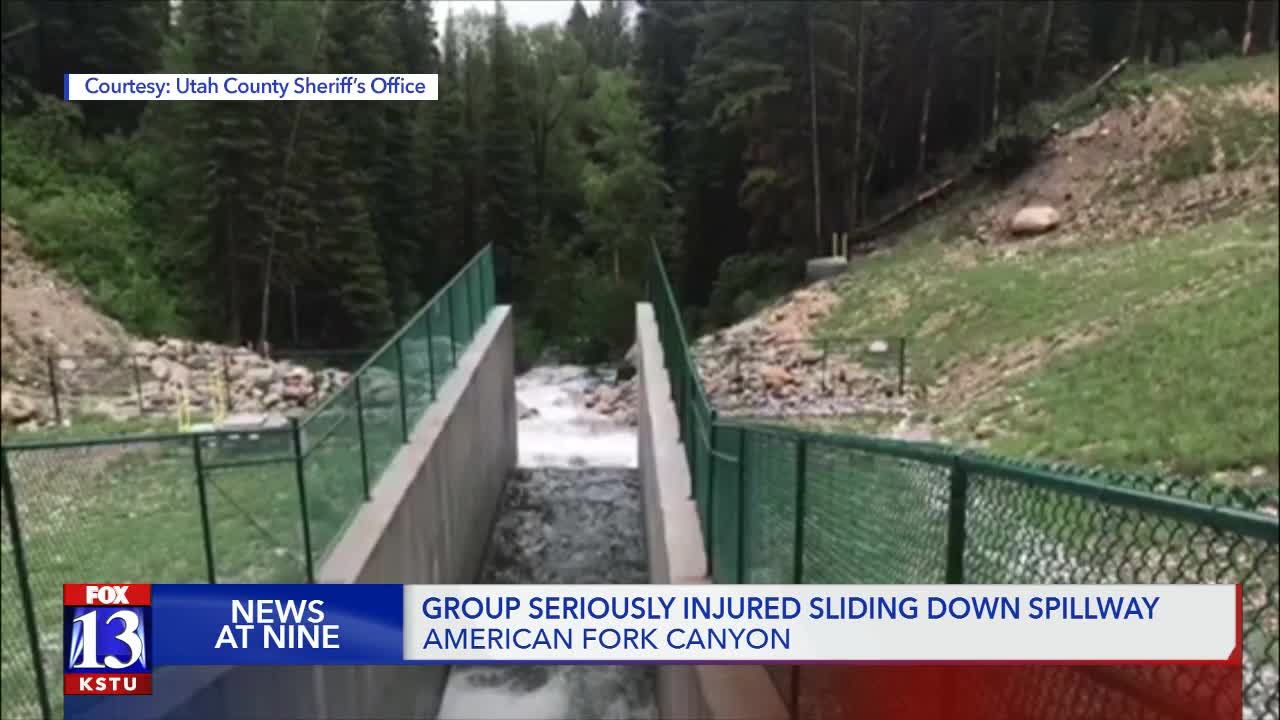 The Utah County Sheriff’s Office is sharing a warning with the public after five young men were seriously injured after sliding down the spillway at Silver Lake Flat Reservoir.

AMERICAN FORK, Utah — The Utah County Sheriff’s Office is sharing a warning with the public after five young men were seriously injured after sliding down the spillway at Silver Lake Flat Reservoir.

On a nice summer day, hundreds of people can be found flocking to the reservoir in American Fork Canyon.

A 3-mile dirt road takes you to the water, where patrons will find breathtaking views and a dangerous spillway – transporting excess water from the top of the reservoir, under the dam and out the bottom.

“It does kind of look like a waterslide, that’s one of the things that makes it dangerous,” said Sgt. Spencer Cannon with the Utah County Sheriff’s Office (UCSO).

Despite the possibility of a criminal trespassing conviction (which can carry a couple hundred dollar fine and/or community service hours, if caught), thrill seekers have sought out spillways for as long as Cannon can remember.

“In my 29 years as a cop, I’ve chased a lot of kids away from spillways, and adults too,” Cannon said. “Sometimes people can do it and have no problems, and other times it’s incredibly risky and people are injured or have been killed.”

The spillway at Silver Lake Flat Reservoir is particularly dangerous. In 2015, the dam was strengthened and the reservoir was expanded – in turn, raising the lake level and creating the need for a new 300+ foot spillway.

“It’s hard to gauge the risk from the top,” said Cannon.

The new spillway is 318 feet long and sends those who choose to jump in plummeting at a 45-degree angle, to shallow water covering a solid cement base.

“The outcome is never going to be good when those are the factors involved,” Cannon continued.

For five 19- and 20-year-olds, UCSO said their attempt at adventure very well could have been fatal.

“It’s not an exaggeration to say these young men could have died,” said Cannon. “As soon as they started to slide, they realized what a bad decision it was for them.”

But UCSO said the injuries speak for themselves. Between the five of them, they had three broken ribs, a foot broken in two places, a broken sacrum, a back broken in three places, a spinal cord contusion, a serious concussion and approximately 270 stitches.

Cannon said the boys had to climb back to the top of the spillway, get to their cars, drive to an emergency phone down the mountain and ultimately drive themselves to the hospital.

“They will be the first ones to agree with us that the decision they made was a very poor one,” said Cannon.

All five were charged with a criminal trespassing infraction. However, Cannon said the boys worked with the prosecutor’s office to create a video warning the public of spillway dangers, in lieu of a fine.

The video can be seen here (WARNING: The video contains graphic photos of injuries).

“We wanted everyone to know what happened to us, because we didn’t want to see anyone else get hurt at Silver Lake Flat,” one of the boys can be heard saying after they each shared photos of their injuries.

Cannon said while one of the boys will not be able to walk for a few more weeks, they are all recovering and expected to be okay.

Now, the young men will have scars to remember this for the rest of their lives and UCSO hopes others will remember their story too ahead of the holiday weekend.

“It would be jam-packed this weekend. If there’s half decent weather at all, there will literally be hundreds of people,” said Cannon. “If even just a small percentage see that and any of them have an inkling of doing that, they’ll be thinking twice before they make that decision themselves.”