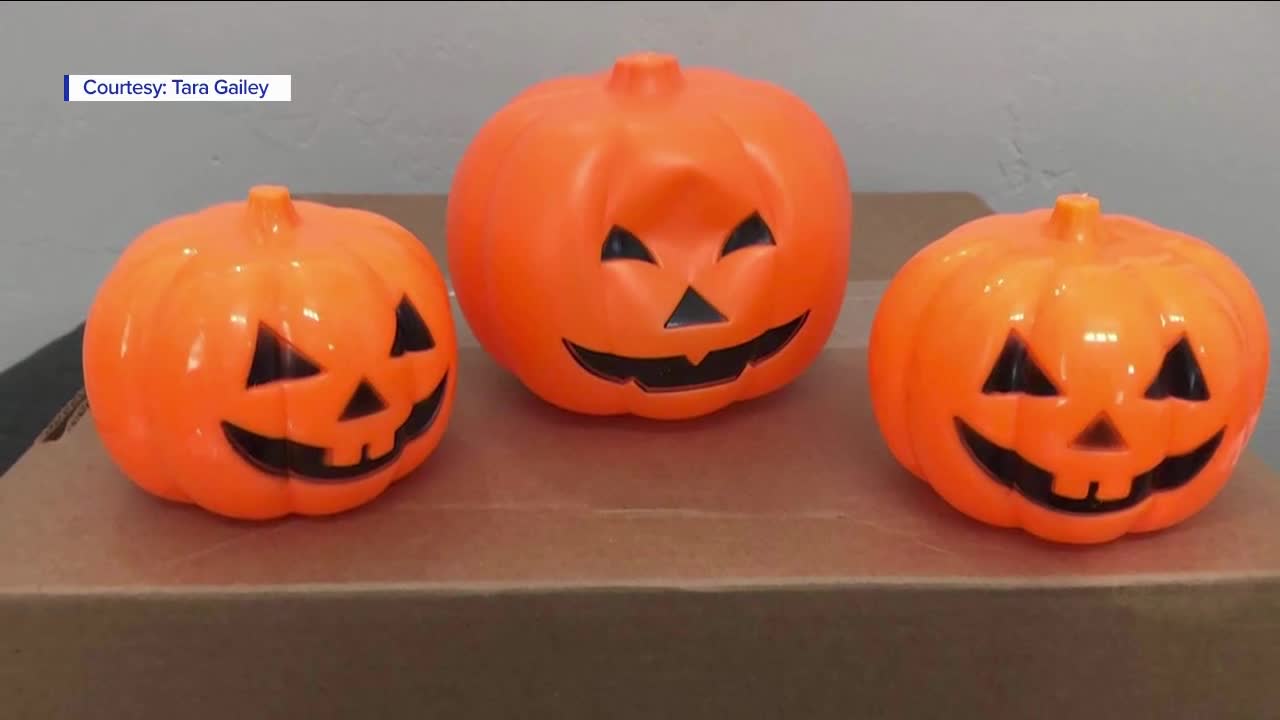 COTTONWOOD HEIGHTS, Utah — We've all seen them, and likely been tempted by them.

Advertisements pop up on Facebook in between posts and pictures, showing off enticing items at a price you can't beat.

Many Utahns are saying that they fell for a recent Halloween ad, but what they thought they were purchasing is not what they received. Now they're finding out that they're out of luck in getting their money back.

It's "spooky szn," and that means Halloween decorations are out. But Halloween is looking a lot different this year because of COVID-19. Heather Anderson said things have been tough with pandemic. They won't have family parties, and her kids can't do all their usual fall activities.

Which is why, as she scrolled through Facebook one day, she was drawn to a fun, magical advertisement.

She described it as, "something you'd see at Disneyland." Talking, singing pumpkins with projectors inside of them. The pumpkin itself is blank, but the projector casts various faces on the front, accompanied by jokes and music.

The ad showed an animation of the pumpkins, giving a clear picture of how they operate.

She said she read positive comments and reviews on the pumpkins, and made the purchase. Heather ordered a medium, large and extra-large pumpkin. Each one was supposed to portray a different face and mood-- silly, scary and funny.

She shelled out $54, and awaited the arrival of the decorations.

About a month after she made the order, the box came just in time for Halloween.

It looked suspiciously small, so Heather said she made an unboxing video in case she needed to report the company.

In the video, Heather reacts to the opening of the extra-small box, revealing three tiny pumpkins wrapped in plastic.

She gasps as she sees them. "This is not what I bought!" she says. "That's a total rip-off."

Two of the pumpkins were the exact same size. While all of them light up, none of them play music or emit sound.

Definitely not worth $54 for Heather.

Other Utahns just like her told Fox 13 they, too, bought what they thought were projector pumpkins they saw on a Facebook ad, only to receive tiny plastic pumpkins.

"It's kind of embarrassing when you find out that you've been duped," she said.

Heather said the company that advertised to her is called Favorite Better.

She immediately emailed them. Heather said it took a few days to receive a response, but the company replied.

"You got what you ordered, and we won't be able to help you further," she said, summarizing their email. "And I said, I will be filing a police report, and I will be contacting PayPal and Facebook."

However, Heather found out there wasn't much anyone else could do, either.

She said Visa told her that because she received an actual item, it's not considered fraud.

Fox 13 emailed the address and called the number listed on the Favorite Better Facebook page.

A couple of hours later, a woman who wanted to keep her name private called and texted back.

"The phone calls have been progressively getting angrier and angrier in the last couple of months," the woman said, in a phone interview.

She described how her husband has been receiving calls and texts on his phone for a few months, of unhappy customers complaining. Some have even made threats, she said.

The woman said her husband never takes the calls or responds, because he thought he was being scammed.

They had no idea that her husband's number was listed on the Facebook page.

"I honestly think somebody just chose random numbers, and it just so happens to be his phone number," she said.

Favorite Better responded to Fox 13's email, only to ask for order information so they could "check on" our order. When Fox 13 clarified and re-stated why we reached out and continued to ask questions, the company didn't respond.

Heather's receipt shows that Yokawa Network Limited is the company that actually shipped her the pumpkins. A quick online search of the company turns up similar stories to hers, with many different kinds of products.

"Yokawa Network Limited Is a SCAM and Paypal will not help you. Buyer beware," one person wrote, on a PayPal dispute post from July.

The post has hundreds of comments, with most people saying they never even got their items after waiting weeks to months.

Fox 13 also reached out to Facebook. A representative said they are looking into the phone number issue on the Favorite Better Facebook page.

They also gave tips for making purchases from ads, which boiled down to making sure someone is buying from a reputable company and doing their research on the business and products.

At this point, Heather is stuck with her plain, plastic pumpkins.

She jokingly pointed out that at least they light up.

"Isn't that exciting?" she said, sarcastically. "So maybe instead of 10 cents, it's worth maybe 50."