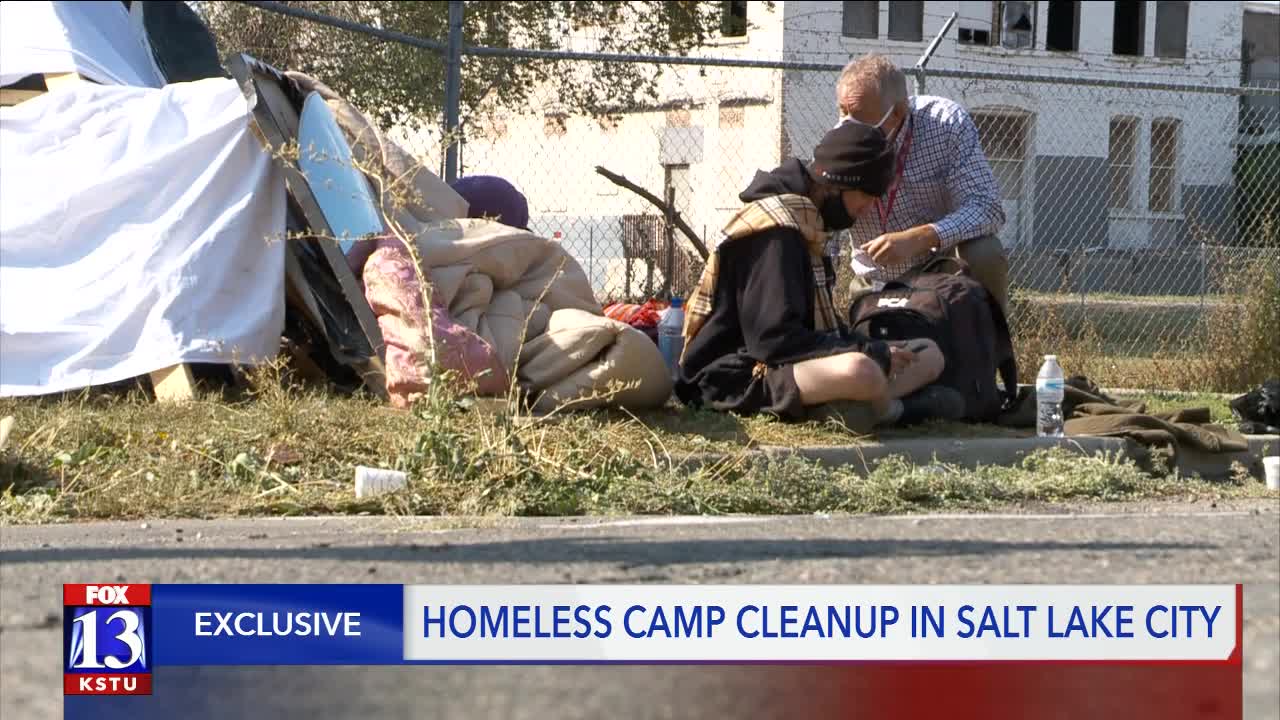 Homeless camp cleanup in SLC brings protests and unrest. In an exclusive with FOX 13 reporter Lauren Steinbrecher, she follows the journey of the cleanup and explains why some people are upset.

A group of people picked up debris to put in trash bags.

Surrounding them, another group yelled and called them names, as they recorded video on cell phones and GoPros.

The debris being picked up wasn't discarded by mother nature.

"Why are you stealing people's belongings?" a woman asked, to Dale Keller with the Salt Lake County Health Department, as he attempted to walk around a homeless encampment and pick up items.

The health department was in the process of carrying out a homeless encampment abatement.

Keller walked up to an unsheltered man.

"Are you cool if our guys clean up the trash that's inside of here?" he asked. Upset community members continued to follow Keller and the crew, closely monitoring every move.

"People have no homes. They need resources," a woman told Keller, with her cell phone pointed toward him. "If you're not here to offer resources, how about you leave?"

The people who showed up to protest the cleanup, including citizen Jordan Talley, described why they feel the cleanup is dehumanizing to the city's unsheltered neighbors.

"With no safe zones in the city, with the shelters being completely at capacity, there's nowhere for these people to go," Talley said.

Before the cleanup began-- and before Thursday's tense exchange-- if one were to rewind the clock a full 24 hours, they'd find a very different scene in the exact same spot.

Keller walked up to a tent on a strip of grass near 700 South Wednesday morning.

"Good morning! Can I chat with anybody in there? How are you?" he asked, to the person in the tent. "I'm Dale with the health department. And we're going to be doing a cleanup tomorrow in this area."

He spent a couple of hours walking around various parts of Salt Lake City, including 700 South, then over and down 300 East, then west in the Rio Grande area on 500 West.

He stopped at every tent along the way, carrying out cordial conversation with nearly every person, to announce that the cleanup was coming Thursday.

He approached a man named Pete. Pete held his dog Kilo. They live in a trailer parked on the street.

"Good to see you," Keller said. "What's your dog's name?" Keller then told Pete about the cleanup, and asked if he needed help. Pete declined, and Keller moved on.

He told another person: "We're going to be here tomorrow, about 9:30 doing a cleanup."

"Do not want you to lose any of your belongings," he said, to an unsheltered resident, "And so, anything that's left here will be considered abandoned."

Every time, he ended his conversation wishing the person a good day. One man thanked Keller for giving him time and a warning before the cleanup.

Keller explained that there's been less abatements happening during COVID-19, mainly because county health department staff have been hammered with work related to the virus.

Camps have continued to grow in certain areas, he indicated, making the public spaces unsafe from a health standpoint because of things like needles, trash and human waste.

"You kind of walk a tight rope here, of respect and dignity to our unsheltered friends. But also there's a public health and environmental health component to this, that is part of our job that we need to enforce as well," he said.

As Keller spoke with different unsheltered citizens, he offered to connect them to resources. Keller said the health department works with several organizations on outreach, including Volunteers of America, Addict to Advocate, One Voice Recovery and others.

He described how he collects the names of people he speaks to and where they are located, and then calls social service organizations so they can return to the locations later and speak with those individuals to offer resources.

Keller knelt down by a couple and asked what they might need.

"Are you guys interested at all, if I were to have social services like Volunteers of America or somebody come by?" he asked.

A handful took Keller up on the offer.

Jen and her husband Jimmy Hart were two of those people.

"I just really need somewhere to actually stay that's permanent. Not have to move every night," Jen said.

She and Jimmy said they are hopeful social services can help. They want a place to call home with Jen's service dog, a Red Heeler named Duke.

"I'm not looking for a handout, but at least to understand and not be judgmental about it. And if you can help, help us. You know, it'd be appreciative," Jimmy said.

"The question that I get asked all the time is, 'Don't want to go to the shelter,' or, 'There's no room at the shelter,' or there's those type of, 'I just want to just be left alone. Where do I go?'" Keller explained. "And I don't have a good answer for that."

Keller said there needs to be a long term option. When asked why not just let people keep camping on the sidewalk versus making them move, he said the simple answer is that it's against the law. The longer a camp stays, he said, the more stuff there is-- which affects the community and the environment.

"We have to think of wiser solutions to the problem," he said. "And right now success is, let's try not to fatigue an area."

After speaking with several groups Wednesday, letting everyone know what was about to take place and offering resources, Keller left.

He said he immediately reached out to social service partners, calling them on the phone to tell them where individuals wanted help.

At all the camps where Keller wasn't able to talk with people, other health department staff posted notices that announced the cleanup in 24 hours.

It's those notices that others in the community spotted, leading to the response on cleanup day.

The group of people surrounded Keller, department staff, and police officers that Keller said were called in by the Salt Lake City mayor's office and county health department to make sure everything went smoothly.

But things did not go to plan.

"Hey, put your foot off of that," Keller said, to a community member.

Some unsheltered residents became upset during the cleanup. They didn't have a way to carry everything off the grass and out of the area.

"We'll be back, though," said Richard Ryan, as he attempted to put belongings in a bag and on top of a stroller with a broken wheel, preventing him from being able to move it. "We ain't leaving for good. I'll be back later, as soon as these fa***** are gone."

Others like Raymond Wilkerson and Jonni Vierra were already prepared for the move after Keller talked with them the day before.

"He's been really nice. Really nice," Vierra said, of Keller. "So right now, I'm not complaining about nothing because he's allowing us to stay."

Vierra and Wilkerson explained that Keller told them to put their belongings on the sidewalk so that the health department could pick up anything they didn't want on the grass.

They planned to move back on to the grass after the health department left.

"The issue that we face-- that they face-- is they are being dispersed. They are moving, they are being told to leave this encampment, go somewhere else. And then they go where?" He asked, to the employee. "Right... it's a Band-aid fix," the employee acknowledged.

Talley said he hopes to work with the city.

"I see kind of where a lot of this anger comes in. I feel it myself," he said. "However, to be effective, I think we have to just have conversations. Even if we don't agree, we have to be able to talk about this kind of stuff, because it is an issue for everybody."

Even with constructive conversation happening, it became clear that the cleanup was growing increasingly difficult for Keller.

As he tried to talk with an employee, a woman with a cell phone stood close and made remarks to Keller.

"You make a career out of stealing people's stuff," she said, standing next to him as he began to walk away.

At another point, a group stood on the grass, stopping Keller from grabbing items.

"You know what, you aren't going to tell me how to do my job," Keller said.

"Don't. Touch. It!!" a man yelled back to Keller, referring to items on the ground. "I will tell you as much as I want."

"Please just stop," a woman said, to Keller. "He's getting it right now."

Another man spoke up. "You're too old for this game, man. You don't want to start that."

Eventually, Keller decided not to continue the cleanup in some of the other areas as originally planned.

"We get that there are many pieces to this problem," he said. "Our focus is the public and environmental health piece. Hence the fact that, for the most part, we just picked up garbage and trash today and attempted to move on."

Fox 13 caught back up with Jimmy and Jen on Thursday. They left the spot they had been camping in, and packed all their things up on a wagon.

However, the cleanup ended up not taking place on their street in the Rio Grande area.

They said no social services came out to talk with them, either.

"It makes me feel frustrated and little PO'd at them," Jimmy said.

They are unsure of what comes next.

"I don't know what we're going to do, as of this point," he said. "We could end up walking streets all night, pulling wagons."