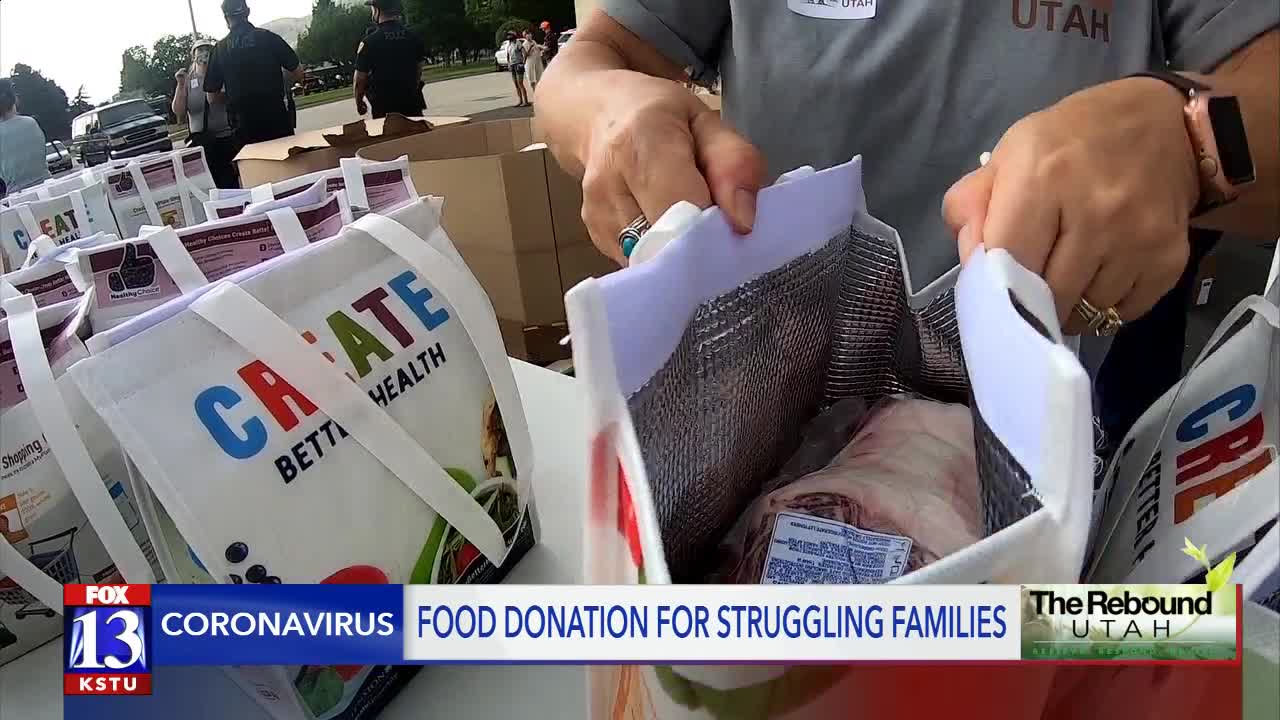 Hundreds of families in the Salt Lake Valley received a special gift Monday, from farmers and ranchers all across Utah.

As soon as word spread, cars began to line up at the Utah State Fair Park.

"I just went and ran in the van, and took off," Irene Middleton said, of when she found out. "I'm still in my PJs!"

She heard about tons of local meat and produce, being offered up to anyone who needs it-- for free.

The "Miracle Project" is a donation program run by Farmers Feeding Utah, a nonprofit started by the Utah Farm Bureau. The group raises money to purchase goods from local farmers, and then donates everything to families in need.

Irene didn't want to miss out. She couldn't afford to.

They don't know how they'll pay the bills this month, but at least they could come stock up on food. Irene also grabbed food for her neighbors, who she said have five kids and both parents are out of work because of COVID-19. Their unemployment benefits were cut, she explained.

Andrea Carbine and her mother drove up for groceries. Her mother said it's a blessing.

Things are tough these days.

People have lost their jobs, and many on unemployment aren't receiving enough to make ends meet.

Because of the higher demand, they said many food pantries don't have enough food for the families they serve.

At the same time, product prices have plummeted, leaving generations-old family farms in jeopardy of closing.

Farmers Feeding Utah said processing shortages and market losses have left many Utah farmers without an outlet for their products.

The organization brings the two groups together, in a way that benefits them both.

Utah Farm Bureau President Ron Gibson explained that they set out with a goal of raising $100,000. They've now raised more than three times that.

He said the Miracle Project brings money to farmers and ranchers throughout the state, and helps those with food insecurities at the same time.

Farmers Feeding Utah started with two Miracle Projects. They purchased livestock, meat and flour to donate to families on the Navajo Reservation.

They also purchased meat, dairy and potatoes to give to 450 families in the Cache Valley.

Monday's Miracle Project was their largest-- with a goal of feeding over 800 families living in and around the west side of the Salt Lake Valley.

They had a huge array of food items that Gibson listed off. It included beef from Lehi, lamb from Monticello, sweet corn from Utah County, mushrooms from Millard County, garlic from Davis County, cherries from Santaquin and eggs.

Gibson explained that they were holding a Farm Bureau Federation meeting, which drew presidents and members from chapters in states around the west.

With that, California farmers sent up a semi truck load of carrots.

Bryan Searle, President of the Idaho Farm Bureau, also shipped in a truckload of potatoes.

"I counted them!" he exclaimed, laughing.

He said the pandemic has brought a lot of challenges, and this is a positive way to stay focused.

Searle knows everything will go to good use.

"You can sense it. You can feel it in your heart. It means so, so much to them," he said.

You could see it in Irene, who teared up and said, "Thank you," as Bryan loaded corn in the back of her van.

She said this food means she and her family get to eat this month.

"It is. It is," she said, wiping tears from her face. "People don't realize just how important stuff like this is."