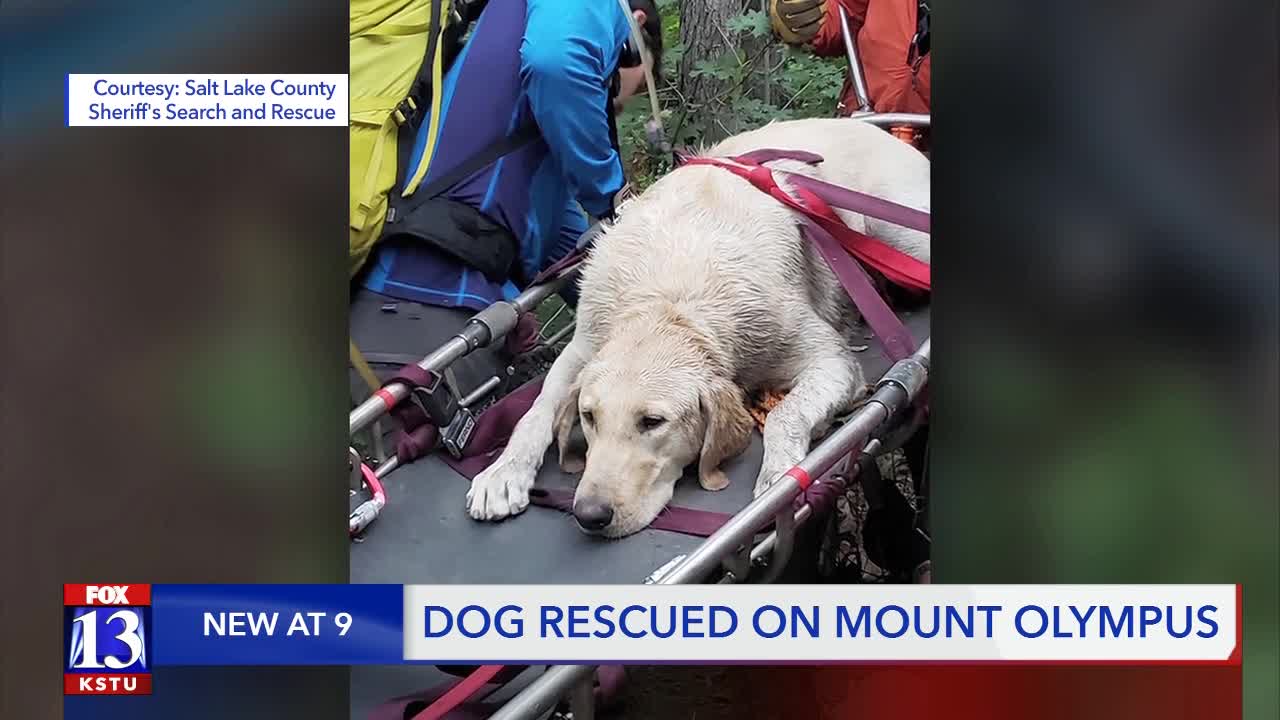 Leo, a yellow lab, weighs roughly 120 pounds. He and his owner set out to conquer Mount Olympus around 11 a.m. Monday. The hike is roughly eight miles roundtrip, covering more than 4,000 feet in elevation gain. Leo started to become dehydrated as he and his owner reached the saddle just before the summit.

“Unfortunately, a common call for us is a dehydrated person pretty high up on a trail in the middle of the summer. It’s our busy season for sure,” said Salt Lake County SAR volunteer Stephen Smith. “Last night, that dehydrated person happened to be a Labrador named Leo.”

Leo, a yellow lab, weighs roughly 120 pounds. He and his owner set out to conquer Mount Olympus around 11 a.m. Monday. The hike is roughly eight miles roundtrip, covering more than 4,000 feet in elevation gain. Leo started to become dehydrated as he and his owner reached the saddle just before the summit.

“Dogs can’t communicate to us like people can, so you need to take some extra precautions, make sure your animals are fit, make sure you’re easing them into Wasatch hiking. Just like any of us, if you start on Olympus, you’re going to have a bad day,” said Smith. “You need to overcompensate for their lack of ability to shed temperature — dogs can’t take off layers, they can’t wear shorts, they’re wearing a coat up and down that mountain.”

After Leo’s owner tried to cool him off, they were suddenly out of water and Leo was unable to move on. Since Leo’s condition wasn’t improving, he decided to call for help.

“They get paged out as an injured hiker, and I don’t think it matters to any of us whether it’s a person or not, but in this case many of us had to leave work to come out here and hike up in 100-degree temperatures,” said Smith.

Nearly a dozen SAR volunteers left their jobs and prior commitments to answer the call. After hiking more than three miles, covering steep terrain and taking cover from a passing thunderstorm, the SAR team reached Leo. They were able to rehydrate him and fanned him off. Since Leo couldn’t walk on his own, the team loaded him onto a litter to transport him down the mountain.

“It’s an interesting challenge. All of our equipment is designed to carry humans,” said Smith about altering the rescue equipment for use of injured animals. “They’re often times scared and afraid. We’re used to that like we are with humans. We talked to the dog the whole way down just like we anybody that we’re pulling out of here.”

After a few hours, Leo was safely back at the parking area where a Unified Police Officer was waiting to transport him to a local veterinarian clinic with his patrol car. As of Tuesday afternoon, SAR shared an update that Leo was recovering from heat exhaustion and his kidney function had returned to normal.

“If you notice that your animal is starting to have trouble, turn back earlier rather than later,” advised Smith who has been on numerous animal rescues in his three years with the team. “Overprepare when you’re going up these hills, take more than you think you’re going to need because you might run into somebody that needs more than you do.”

Search and Rescue volunteers are constantly using their own time and money to answer the call, as was the case for Monday’s incident on Mt. Olympus.

“We’re prepared, we’re fully staffed, we’re ready to come get any time day or night — but we ask you to be cautious and keep in mind that we’re having to leave the things that we were doing, our birthday parties, our dinners, our work,” said Smith. “This money comes out of our pockets in a lot of cases. I’m wearing my backpack, those are my hiking shoes, my hiking poles. The county supplies us with life-safety gear that partially comes from the tax budget, but mostly comes from volunteers — from people that are either interested in what we do or that we’ve pulled down off the mountain.”