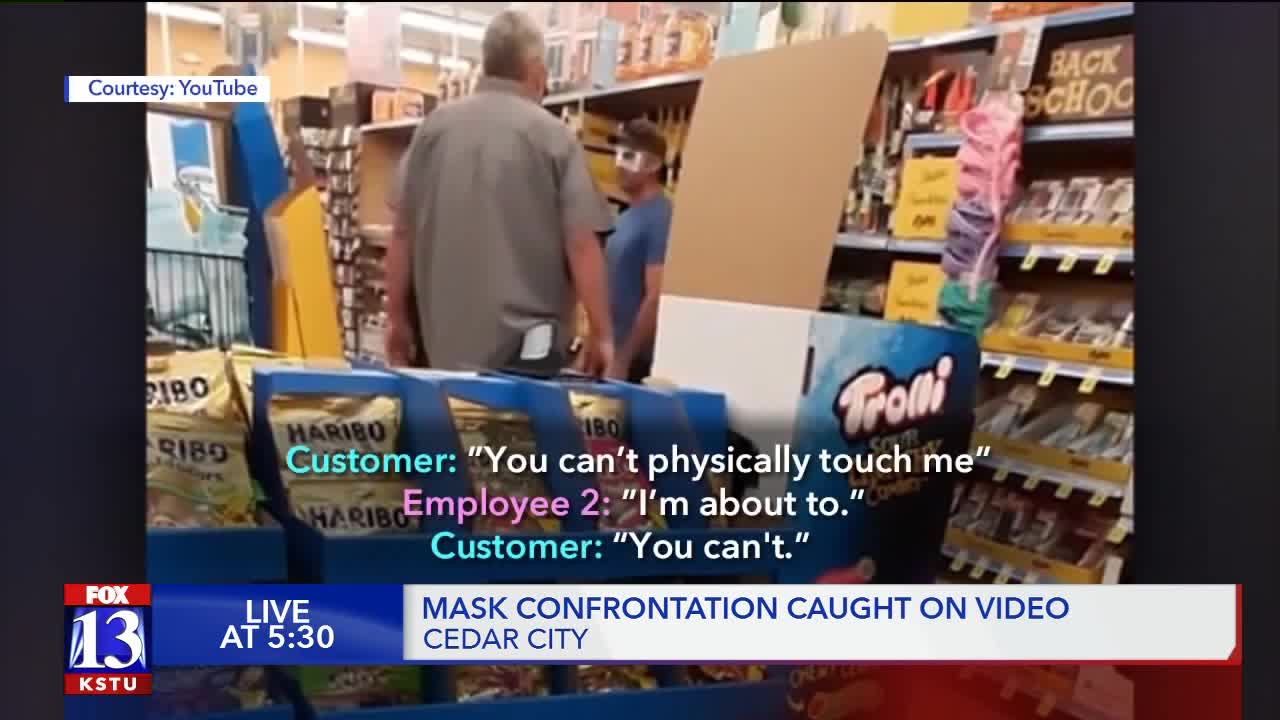 “I’ve been here for 30-years, never seen anything like this,” said the man who captured the July 23rd incident on camera.

“I actually did the video because I was afraid it was going to break out into a fist fight,” the man said, asking to remain anonymous for fear of backlash.

“What is the problem here?” a woman, believed to be a Smith’s employee, can be heard saying as she walks up to a group.

“You’re not wearing your mask properly,” the woman responds.

The quick back-and-forth marked the beginning of a 7-minute video captured inside a Smith’s Food and Drug store in Cedar City, Utah.

“We’re doing our job, what our corporation wants us to do,” the woman continues.

Then, things escalated, sparking a confrontation between three Smith’s employees and the customer, who chose to wear his mask in ‘superhero’ fashion – cutting eyeholes out of a disposable mask and then securing it around his forehead.

“You’re doing it just to be a jerk, we all know this, and so do you so cooperate,” the female employee continues.

“Why don’t you get a [expletive] job and get out!” a second male employee shouts.

The customer’s response is nearly indistinguishable followed by a quick, “I’m in America.”

A third employee then chimes in, “That makes you American?”

“It doesn’t make you American,” said the first employee.

“It makes you an [expletive],” adds the second employee.

“This is private property!” said the second employee.

“Get your [expletive] out of this store,” the third employee continues.

“You’re going to be 86’d from every [expletive] Smith’s in the world,” the second employee shouts a few seconds later.

In the midst of the quick exchange, the customer can be heard again, “You guys aren’t even doing your social distancing.”

“Because you’re a [expletive] [expletive],” responded the second employee.

The shopper who filmed the altercation said the language used by the employees was ‘shocking’ and part of the reason he began recording. The other reason, when he heard employees make threats of violence.

“You’re not American, you’re being a piece of [expletive] right now,” said the second employee.

“You’re turning into a little Nazi,” the customer said to the second employee.

“Well it doesn’t matter who I support,” the customer continued.

“[Expletive] redneck, I’m about ready to throw you out,” responded employee number two.

All of the aforementioned quips between the employees and customer happened within the first 2-minutes of the 7-minute long clip.

“You can’t physically touch me,” said the costumer.

“I’m about to,” said employee two.

“You can’t,” said the customer.

At that point, the third employee reinserts himself into the conversation saying, “We have the right to defend ourselves.”

“And I have the right to defend myself,” said the customer.

“But I promise you, you’ll be the one going down,” employee three continues.

As a longtime Cedar City resident and Smith’s customer, the shopper who filmed it said he is still in disbelief.

“I was shocked, because I know most of the people there in the video, except for the guy in the mask, and I have for many, many years,” the man told FOX 13 in a phone interview. “I was surprised to hear that type of abusive language and threats being thrown out by them.”

As the film nears the halfway mark the first employee can be heard trying to mitigate the situation.

“Okay, we need to de-escalate the situation, we all know what’s going on here, the cops are on their way,” she said.

The shopper decided to keep filming and the incident kept going.

“It’s our way or the highway, and obviously the highways coming your way,” said the third employee.

“We can have you 86’d,” the second employee continues.

“You’ll never be allowed back in here,” said the third.

In a statement to FOX 13, Smith’s Corporate Affairs Manager, Aubriana Martindale, said they were aware of the incident:

“At Smith’s the safety of our customers and associates remains our top priority. While we do request all customers to wear a facial covering to help mitigate the spread of COVID-19, we were disappointed in the manner this incident was handled as it does not reflect our values or standards of service and have addressed the associates involved.”

Still, the anonymous shopper who captured it said now, he has concerns.

“I would expect to see this in some other city where they’re having problems, but never in Cedar City,” he said.

In further conversations with FOX 13 Martindale said the employees involved, ‘were re-trained on de-escalation and expected customer service.’ However, ‘beyond this, we are unable to comment on personnel matters.’

Cedar City Police confirmed a report was made. However, the customer was leaving the store as they arrived and no charges were filed.