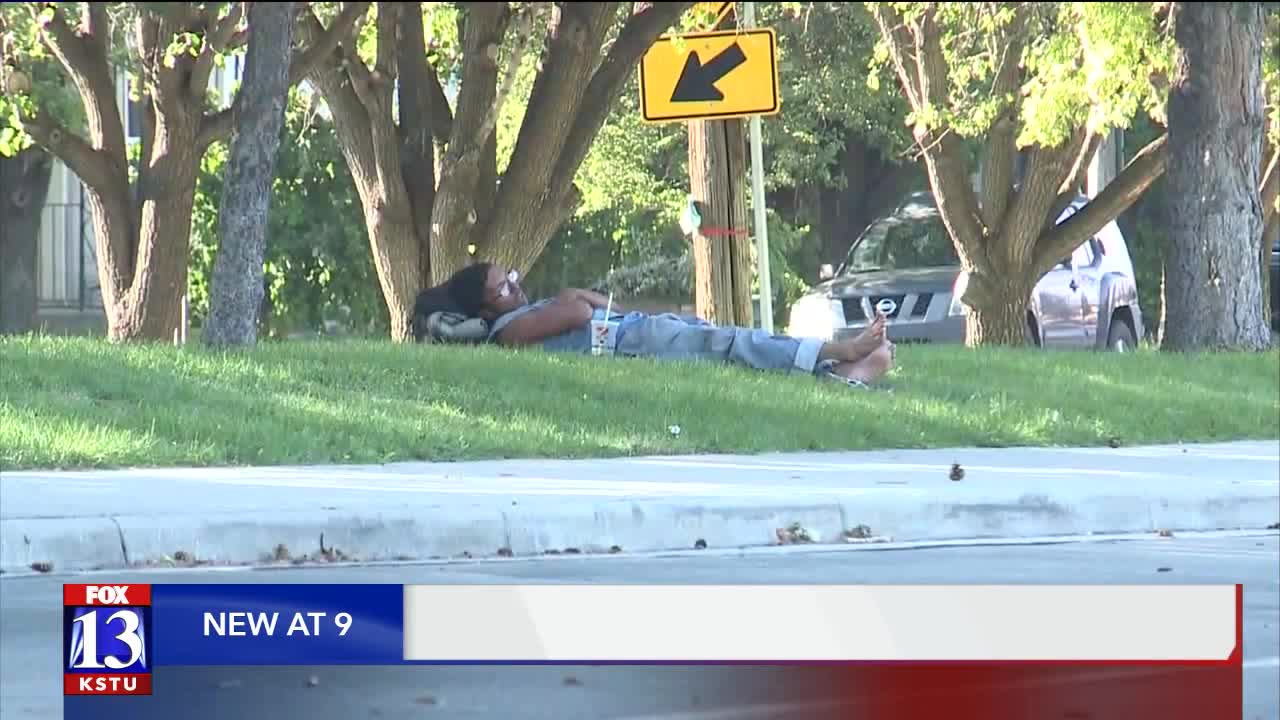 SALT LAKE CITY-- A Salt Lake City neighborhood is looking for ways to move forward, explaining there's been a spike in those experiencing homelessness camping out and using yards and sidewalks as bathrooms.

The city came in with a fix for the bathroom situation, but neighbors said it doesn't address the real issue.

On Wednesday afternoon, Shelley Bodily's three daughters played on the sidewalk in front of her Ballpark neighborhood home.

Beyond their street, Smith's Ballpark rises up in the distance. Shelley said it's a proud centerpiece in their neighborhood. She's lived in her home for more than a decade, and said they love the energy that comes with concerts and ballgames.

She carefully watched her daughters play. Shelley's oldest, Maxine, rode her bike up and down the street.

Shelley doesn't want them in front of the house alone.

"They're not out front, usually, without supervision," she said.

Not after what's been happening in the area lately.

"It's been quite terrible, actually," Shelley explained. "Especially in the alleys and kind of the hidden spots. A lot of people setting up camp... they're sleeping there, but they're also using them as restrooms, unfortunately."

In the alley behind her house, Shelley said someone camped out for weeks. The health department recently cleaned up the camp, and she said it included breaking down walls, getting rid of a mattress, and disposing of human waste discovered in a plastic bin.

There's been an increase in foot traffic in general, she indicated. She talked about how some of the people have even tried to talk to her daughters through their fence, and thrown things over the fence.

Jennifer Luft has been seeing the same thing, across the street from her home. She lives a few blocks away from Shelley, on the other side of Smith's Ballpark and 1300 South.

Looking out her front windows, she could see several people sprawled out across the sidewalk and strip of grass Wednesday evening. Some set out blankets. Belongings were strewn about.

Jennifer explained that more and more people have been congregating in this area, and she's left to pick up.

"It's all of the garbage that transfers from that side of the street into to my yard," she said. "So, constantly picking up trash, and garbage and everything else."

Salt Lake City Mayor Mendenhall described how the city has been fielding complaints from the Ballpark area over issues like human waste, especially since the start of the global pandemic.

"Our office gets those calls as well from community members who are finding that people are using the restroom in alleyways and doorways, and sometimes too close to sidewalks and business doors," she said.

To help with that, the city on Monday placed two portable toilets surrounded by a chain link fence in a parking lot across from Smith's Ballpark, at the corner of 1300 South and West Temple.

Mayor Mendenhall explained that many public bathrooms have closed because of COVID-19. This leaves people less options to relieve themselves. They identified the Ballpark neighborhood as an area where people need better access to a restroom.

"It's as basic as clean water, food, a safe place to sleep," Mayor Mendenhall said. "We know that being able to use a restroom safely, and in a hygienic way, is a basic human instinct and need."

She indicated that the toilets are temporary, and meant to stay until more bathrooms open back up and the COVID-19 situation subsides, and until the Salt Lake Bees play again (because they use the parking lot).

The portable toilets, Mendenhall said, are open seven days a week from 7 am to 7 pm, and always staffed with an attendant.

Sanitation is just the beginning

Tamera Robbins sat inside the chain link area on Wednesday afternoon, monitoring who went in and out. She filled out a check list and sprayed down the bathroom after each use.

"Just keep them sanitized, because nobody wants to sit on a dirty toilet, right?" she said, after spraying the inside area down.

Not only does she make sure to keep the bathroom clean, she ensures there's no trouble. People have a time limit on how long they can be in the portable toilet, to deter usage for other reasons.

As someone experiencing homelessness herself and currently staying at one of the homeless resource centers, Tamera explained that she understood the issue around needing a place to use the restroom.

"People have been defecating on lawns and in the car wash. It's not okay, but what are you going to do?" She questioned. "Because most places won't let you use the bathroom when you're homeless. They judge you."

Even though the toilets were installed two days prior, she explained that she's already had positive feedback from those who used them, grateful for a place to go to the bathroom.

"They're treated like a human being," Tamera said. "And I'm always really nice to them."

At the end of the night, she locks up the bathrooms and closes the fence with a padlock.

Not if you ask Shelley, Jennifer, and their other neighbor Amy Hawkins.

"This isn't a new problem, this isn't a COVID-19 created problem," Amy said. "This area of the city has been under dire circumstances for a while."

Amy serves as the chair for the Ballpark Community Council, and also lives within a few blocks of Smith's Ballpark.

She talked about how the council met recently to talk about the issues in the area. Some community members who found out about the upcoming installation of the toilets weren't happy, she indicated.

Amy and the others explained they have no issue with the toilets themselves-- in fact they agreed with Mayor Mendenhall that it's an important resource to provide to those experiencing homelessness.

Their concern was with where the portable toilets are placed, and if the toilets are truly addressing the issue.

Amy said they are a band-aid over the situation, and that has been hard for neighbors to accept.

Amy explained why people may have started to hang out in the area, in the first place: It sits in between two of the new homeless resource centers-- The Gail Miller Resource Center to the south and the Geraldine E. King Womens Center to the north.

"When we got outreach about that homeless resource center, we were told over and over again, 'These resource centers are being designed thoughtfully. There will not be a lot of queuing up outside, the way that you see in the Rio Grande district,'" Amy said.

In the span of less than a year, she said the area has seen four murders. In the past few months alone, she described numerous events including a homicide, drive-by shooting, stabbings and drug deals.

'We need to get it to stop'

When asked about the problems beyond human waste and bathroom usage, Mayor Mendenhall said they've known for a long time about the criminal elements preying on homeless populations, and using that population as a cover.

She said they are doing homeless outreach with Volunteers of America, trying to connect people with resources and keeping the criminal elements from preying on the homeless population.

Amy and the others also said they take issue with the spot the new bathrooms are placed in-- the parking lot used by a school within the Salt Lake City School District.

The Horizonte School sits at the opposite end of the lot. Amy talked about how the city's most under-served children attend that school-- a diverse group with extra challenges.

She worried that the location of the portable toilets would invite people to congregate in the area near the bathrooms, leading to additional issues with crime and next to a spot where children attend school (The Salt Lake City School District has not yet decided if students will return to school this fall because of COVID-19).

Amy said she wants to see services expanded dramatically, especially in the realm of mental health.

Jennifer said she wants the portable toilets moved somewhere else, so she doesn't have to worry what's happening right outside her home.

Shelley suggested moving the toilets to the parking lot of one of the resource centers.

The three of them expressed wanting something else that goes beyond addressing where people will go to the bathroom.

"This isn't trivial. This isn't just quality of life issues," Amy expressed. "There is real violent crime happening here, and we need to get it to stop."