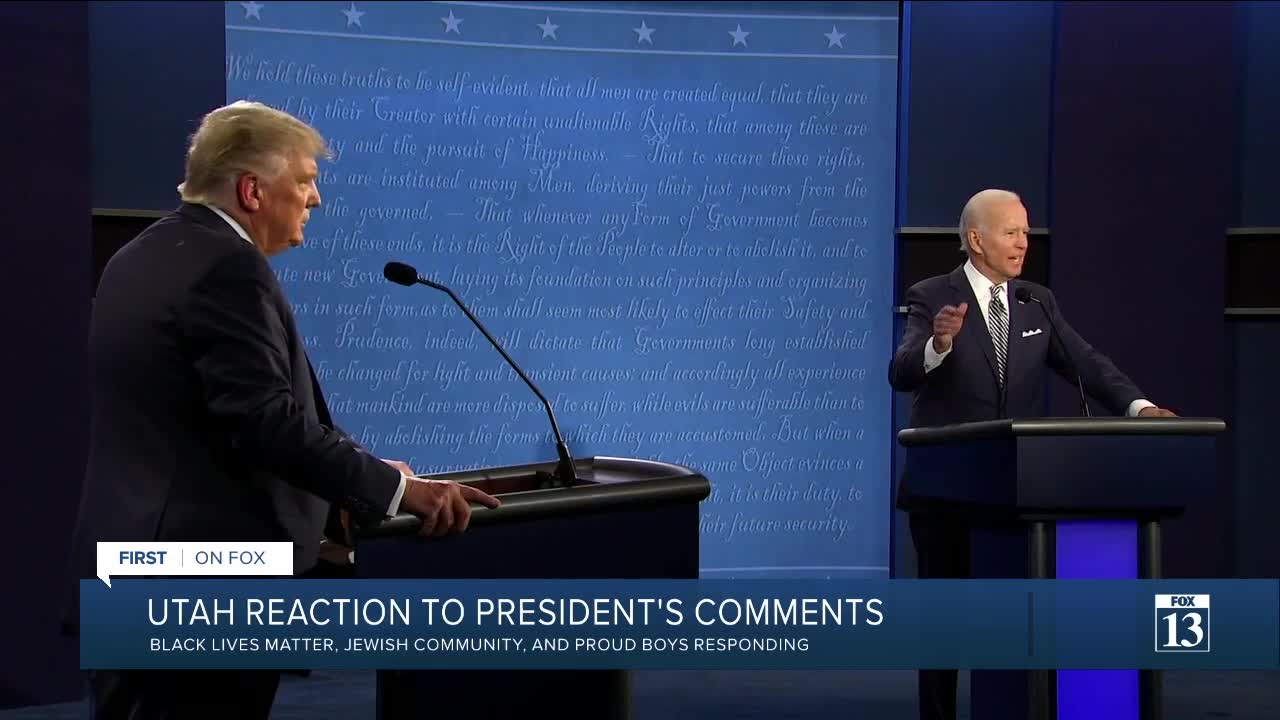 SALT LAKE CITY — After the Presidential debate on Tuesday night, one major talker has been President Donald Trump’s comments about white supremacy and “stand back, stand by” when given the Proud Boys as an example.

“I will go out and say that the Proud Boys as a whole, I will say this on behalf of the entire national organization, denounce white supremacy,” said a man named Thad, who identified himself as the Chief of the Salt Lake Utah Proud Boys Chapter. “We are in no way shape or form, white supremacists, we have a vetting system that just gets those guys out of our hair.”

Standing alongside two members of the Proud Boys was Jacarri Kelley from Black Lives Matter Northern Utah Chapter. Kelley says the two have been working together for a few months to discuss issues including police reform.

Meanwhile, Black Lives Matter Utah leader Lex Scott does not support the Proud Boys citing specific events where they were met with counter protesters. “Black Lives Matter Utah would like nothing to do with the proud boys,” said Scott. “We believe they are a violent, white supremacist militia and we would prefer if they would leave us alone.”

However, Proud Boys leaders who spoke with media members on Wednesday night repeadedly denounced white supremacy. “What Trump said yesterday, it was not an endorsement,” said a man named Seth, who identified himself as the President of the Salt Lake Utah Proud Boys Chapter. “It’s also not a prerequisite to be a Proud Boy to be a Trump supporter, I am not a Trump supporter.”

The Salt Lake City FBI commented that they are more focused on individuals rather than groups as a whole.

"Regarding the Proud Boys: The FBI's focus is not on membership in particular groups but on individuals who commit violence and criminal activity that constitutes a federal crime or poses a threat to national security. When it comes to domestic terrorism, our investigations focus solely on criminal activity of individuals—regardless of group membership—which appears to be intended to intimidate or coerce the civilian population or influence the policy of the government by intimidation or coercion. The FBI does not and will not police ideology."

There are roughly 40 members of the Salt Lake Utah Proud Boys Chapter. “I don’t care what color your skin is, we’re all Americans, we need to find a way to come together instead of divide,” said Seth.