The school moved venues to try to bypass fan restrictions 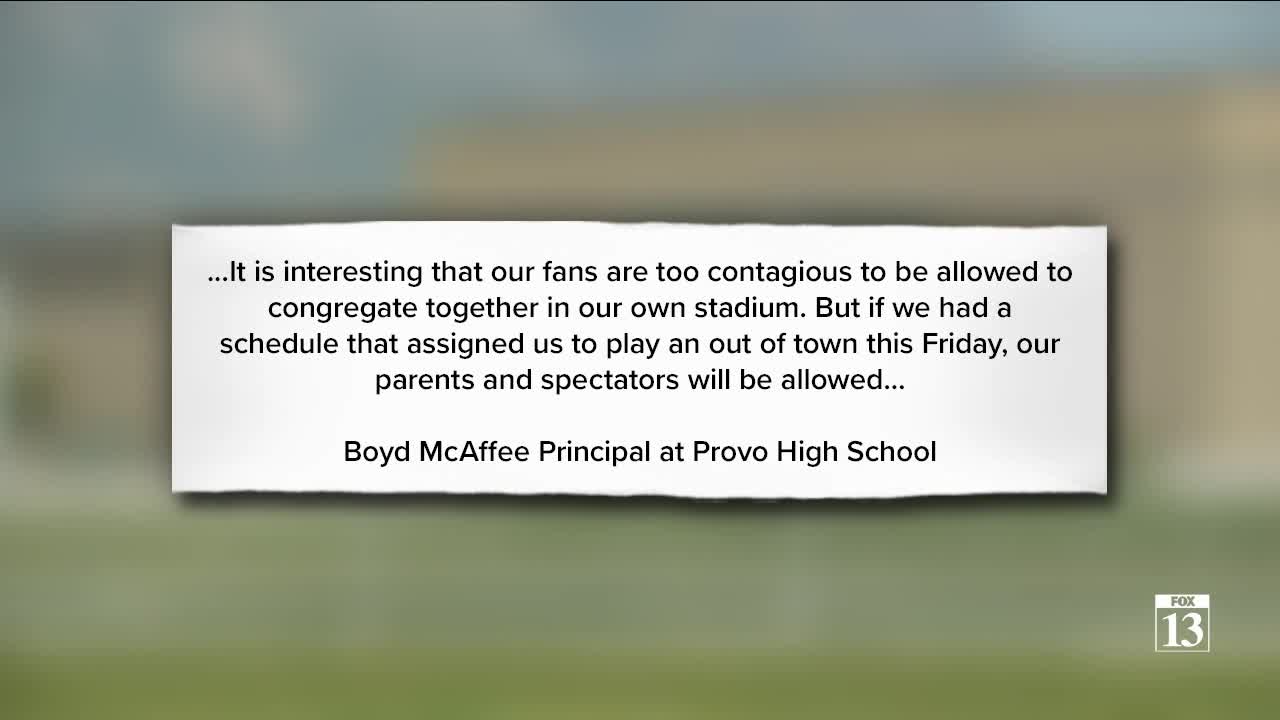 PROVO, Utah — Provo High School officials thought they had found a way to bypass restrictions that would have banned fans from attending the team's homecoming game vs. Wasatch High on Friday.

Instead of playing at home, the Provo Bulldogs would have moved their game outside the restriction area at Spanish Fork High School. School officials thought that would allow parents to attend the last homecoming game for some students.

But just a few hours after making the decision, the Nebo School District called an audible and told the school it would not be allowed to play in the area.

“The school was trying to find a way to adhear to the mandates… and be able to have those parents and senior football players have their kinda last home game” Communications director for the Provo City School District Caleb Price told FOX13.

The original decision was made due to the cities of Provo and Orem moving to the "orange" restriction area Wednesday night, which means fans cannot attend sporting events until the risk level is lifted.

Since Spanish Fork is outside Provo, fans would have been welcome to watch the game in person.

However, the move even caught some Provo officials by surprise, even Mayor Michelle Kaufusi.

"It’s the first I’ve heard of it and I’m a bit surprised. I served on the Provo School Board and I know how challenging of a role it is." said Kaufusi in a statement. "I trust that they will make the decisions that are best for the overall community.”

Beyond that the debate reached Utah’s Capitol Hill Thursday with Governor Gary Herbert saying “I applaud their creativity of thinking outside the box but I am not sure the message is the right message.” And going on the explain “Maybe there won't be any fans in the stadium and that's sad for parents and friends of the players… I get it… I understand that but we have a higher calling right now to stop the spread of this corona virus.”

He goes on to say “It is interesting that our fans are too contagious to be allowed to congregate together in our own stadium. But if we had a schedule that assigned us to play an out of town this Friday, our parents and spectators will be allowed…”

The Nebo School District, which is the district encompassing Spanish Fork High School, told Provo High School to find a different venue for their game.

"After discussing this matter together, the Nebo District Administration has asked the Provo District Administration and Provo High School to find a different venue for the Provo High vs. Wasatch High football game this coming Friday." The school district said. "We appreciate the cooperative relationship we have in working together to support students, their families, and the communities in which we live."

Ultimately for the district they say “It wasn’t meant to defy any order or to find a loop hole in the rules or anything like that… it wasn’t a political statement at all.”