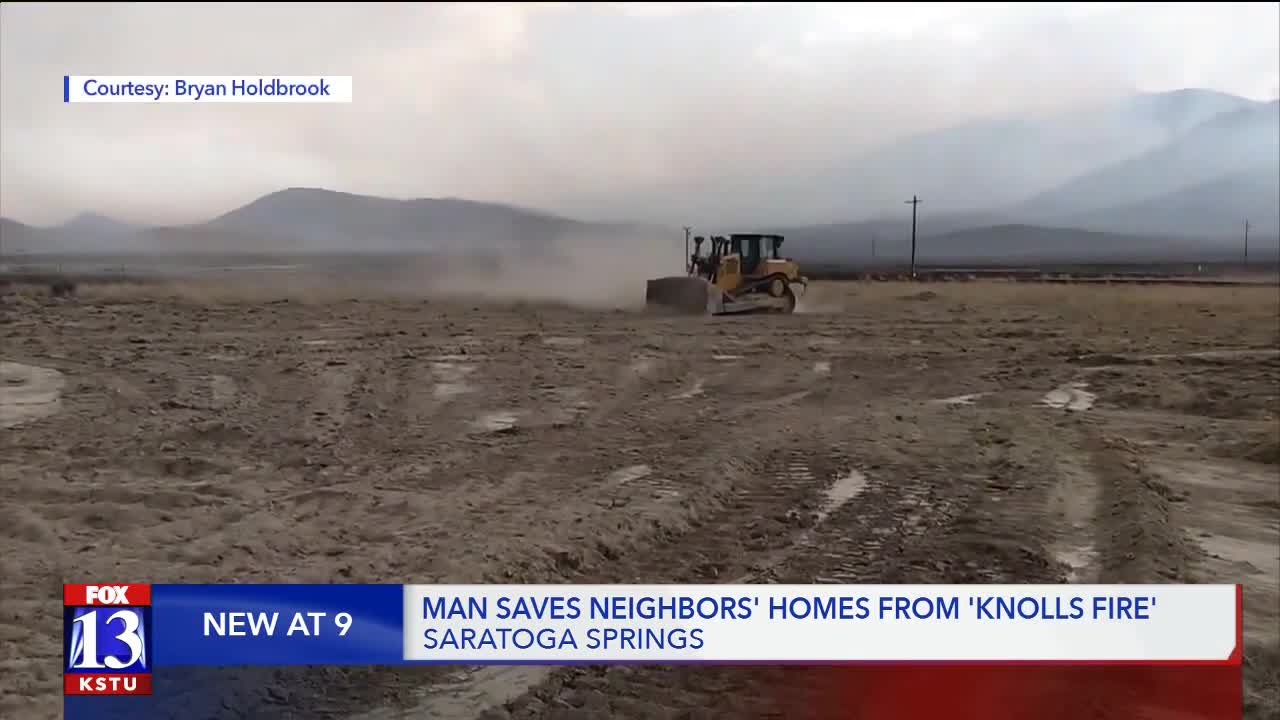 One of the neighborhoods evacuated during the Knolls Fire is grateful for one quick-thinking neighbor who took it upon himself to make sure the flames didn't get any closer.

SARATOGA SPRINGS, Utah — One of the neighborhoods evacuated during the Knolls Fire is grateful for one quick-thinking neighbor, who took it upon himself to make sure the flames didn't get any closer.

They're coming together to thank him for his work to save their homes.

The fast-moving flames quickly chewed through thousands of acres of grass and headed toward homes in Saratoga Springs Sunday.

"It was maybe a matter of 10 minutes before it was already here," said Garrett Hartle, whose home bordered the edge of the fire. "As we were leaving, you could see the flames coming this way."

Garrett and his family evacuated, with no clue what they'd come back to.

Down the street, Robert Young watched the fury of the fire race closer, knowing he couldn't leave just yet.

Robert said he wanted to make sure his elderly neighbors were able to evacuate.

It just so happened that Robert used to be a landscaper, and he's built fire breaks for his neighbors in the past.

It also just so happened that some heavy equipment, including a bulldozer, showed up a few days ago on an empty lot next to the neighborhood for construction crews to start building a school.

Robert could see the bulldozer parked right next to a grassy field that, if on fire, would jeopardize his neighbors' homes.

"I realized that equipment was there, and so I jumped in the equipment," he said. "I was able to take care of an area that hadn't been cleared by the school construction, behind the homes."

Robert spent the next few hours bulldozing a fire line next to his neighborhood. One one side, the Knolls Fire took down everything in its path. On the other, his neighbors' homes stood vulnerable.

"I just wanted to hurry up and get the fuel and grass, and there were some trees — just get that out of the way. And get a good break between the homes," he said.

Fast forward to Monday, when the evacuation orders lifted and everyone returned home.

None of the homes in Robert's neighborhood suffered any significant damage. The yards stayed mostly intact.

"We owe him a lot. Because who knows what would have happened, had he not done what he did and cleared out this field," said Jarom Huntsman, who lives next door to Garrett.

Neighbors knew they couldn't leave it at that. They wanted to help Robert, who has been feeling the impact of COVID-19.

"He's been out of work with what's going on right now too," Garrett explained. "I'm sure in a time where you're wanting to get your family and get out of danger, he kind of stepped up and ultimately saved a lot of us a lot of heartache and grief."

So they stepped up, with a fundraiser to pay Robert's mortgage.

If you ask Robert, he said he was just doing what anyone would do in this situation.

"I don't feel heroic in any way," he said. "It's something that I know how to do, and I was able to help someone with that skill."

But if you ask his neighborhood, Robert selflessly saved their homes.

As they now come together for his house, they agreed it was the least they could do to show thanks for the way he saved theirs.

"I don't feel deserving of it," Robert said, adding that he's "overwhelmed and grateful."

"If he wasn't here moving any this, for all we know we wouldn't be standing here being able to go into our house tonight, and sleeping in our own house. So it could have been a lot worse," Garrett said. "We owe him a lot. So we're very grateful for what he did."