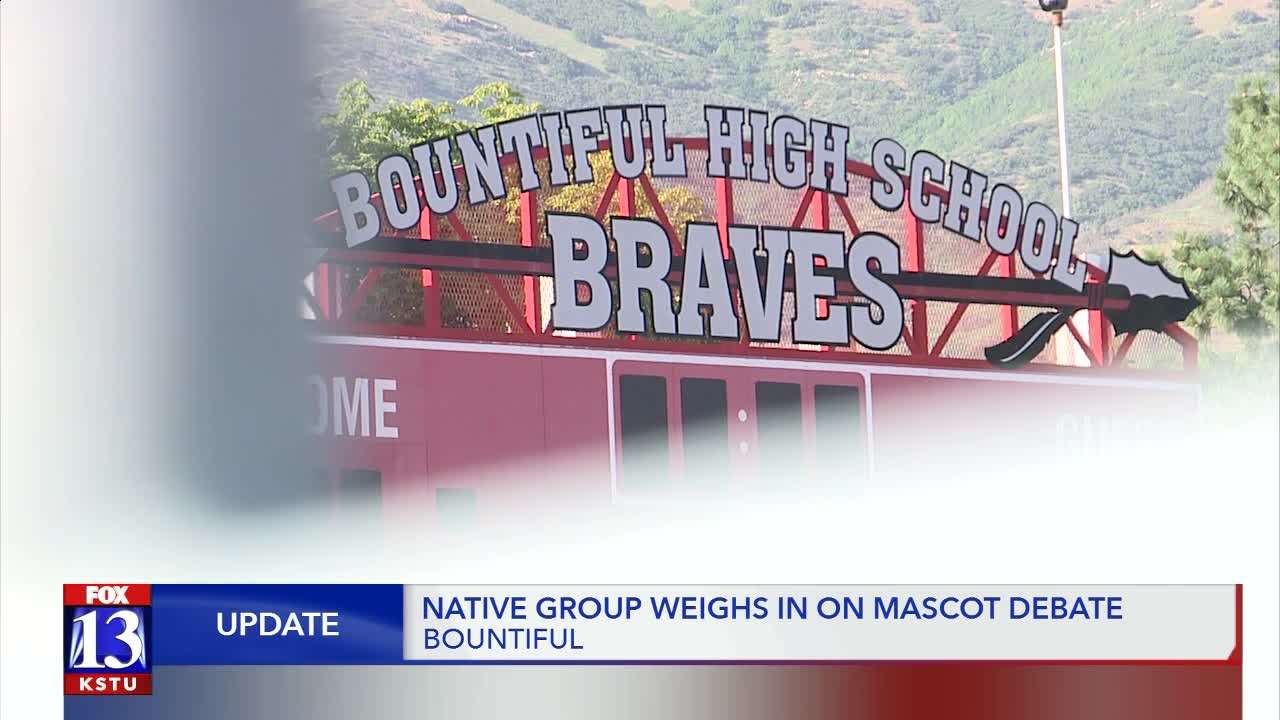 The Utah League of Native American Voters and National Congress of American Indians have come out in support of changing the Bountiful High School "Braves" mascot, as well as other sports mascots, logos and symbols that they say perpetuate harmful stereotypes.

BOUNTIFUL, Utah — Depending on where you look and who you ask, in such a devise issue, there are varying opinions about what to do with the Bountiful High School "Braves" mascot in the future.

“I think now is a pivotal moment in talking about race in the United States. I think the climate, the atmosphere has changed a bit in that people are more receptive, they’re becoming more aware," said James Courage Singer, co-founder of the Utah League of Native American Voters. “It’s how it’s then acted out, students then will maybe wear war paint, maybe wear paraphernalia or regalia that we consider sacred, and it gets used in those ways.”

Singer, who was also involved in the conversation regarding Cedar High School's "Redmen" mascot change to the "Reds" in early 2019, believes the Native American mascots create a certain way that people can treat various minority groups.

“It has a dehumanizing effect on hundreds of Native nations that exist and the members and citizens of those nations," Singer said.

We have issued a statement regarding the misuse of Native imagery at Bountiful High School and support the community efforts towards the mascot's retirement. #changethename #utpol #NativeAmericans #HonorTheTreaties pic.twitter.com/nOcioE9mgV

State Rep. Rex Shipp backed a joint resolution in the 2020 General Session regarding a specific process being put in place to decide whether or not to change a school name, symbol or image.

“I would hope that Bountiful would go through a very careful, effective process if they really want to consider that," said Shipp, who represents the Cedar City area.

A protest on Utah's Capitol Hill resulted from Shipp's proposed resolution, which stalled in the session.

In an email Tuesday afternoon to Davis School District administrators and Bountiful City officials, Ian Record, Vice President of Tribal Governance and Special Projects for the National Congress of American Indians, outlined the reasons why the NCAI is opposed to mascot names such as the "Braves."

"As a resolution passed by NCAI’s membership in 2005 explains, the use of ‘Native American’ sports mascots, logos, or symbols perpetuates stereotypes of American Indians that are very harmful," Record wrote in the email. "The ‘warrior savage’ myth has plagued this country’s relationships with the Indian people, as it reinforces the racist view that Indians are uncivilized and uneducated and it has been used to justify policies of forced assimilation and destruction of Indian culture.”

Bountiful Mayor Randy Lewis apologized Tuesday for comments he made in a reply to a Bountiful High alumna who had emailed him about the school's mascot.

"Do you have evidence that the indigenous people are offended by Bountiful High?” he wrote to Mallory Rogers initially. “This sounds a lot like sheep mentality that follows the BLM movement.”

In a statement released Tuesday, he apologized for "overly-simplistic and hurtful" comments.

"With this specific concern, the changing of a school mascot would need to be initiated at the school level, not by the city. However, I am supportive of having this issue discussed within our community, and hope that all viewpoints can be shared and considered with respect," he wrote.

FOX 13 will be speaking with the Davis School District about the issue on Wednesday.