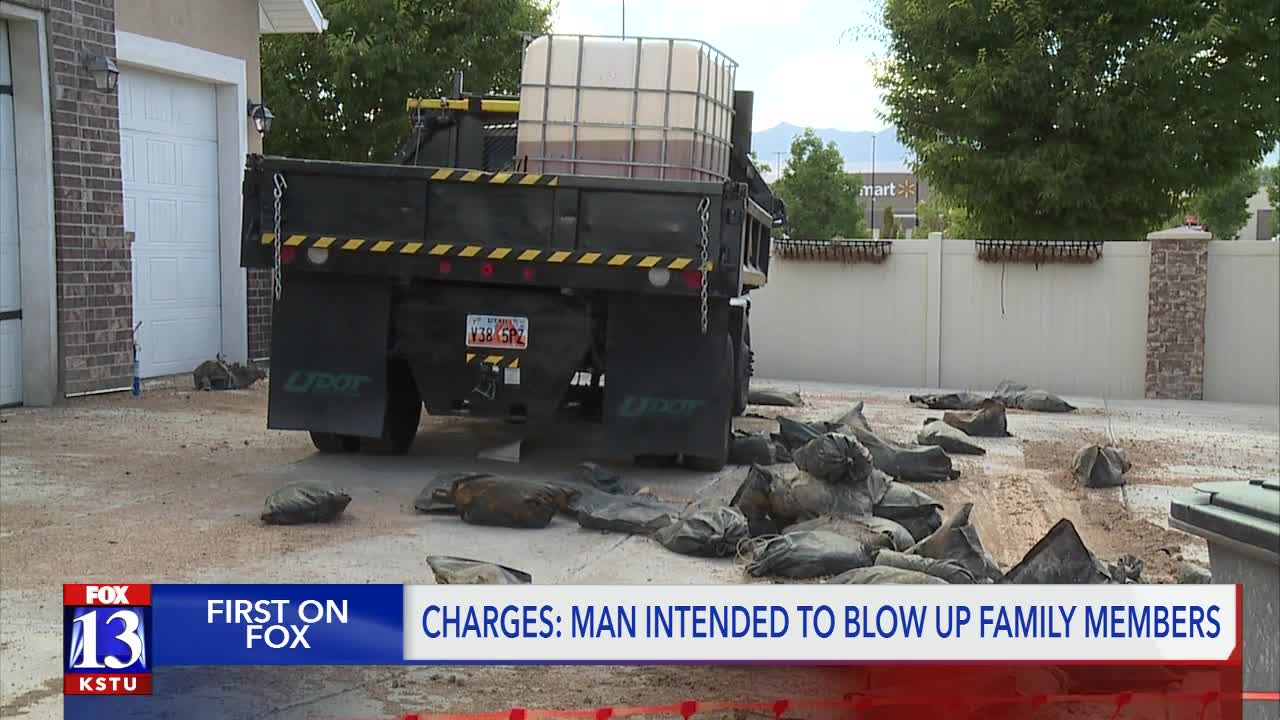 SOUTH JORDAN, Utah — Police believe partially constructed bombs in gift boxes found in the home of a South Jordan man were intended for family members, according to charging documents.

Criminal charges were filed by the 3rd District Court against 42-year-old Ryan Lynn McManigal on Wednesday. Over the July 24th holiday, McManigal, allegedly shot at police officers in an armored vehicle and prompted an evacuation of hundreds of homes and businesses.

Police believe McManigal had been manufacturing explosives since February. McManigal’s charges include two counts of attempted aggravated murder, three counts of use of a weapon of mass destruction which are first-degree felonies along with three counts of violating a protective order.

A report by South Jordan Police Detectives indicated Ryan McManigal began sending threatening text messages and posting comments online about being “gang-stalked” and that he was frustrated with those at a nearby Culver’s restaurant.

The documents indicate that South Jordan Lt. Matt Pennington had spoken to McManigal via text message and on the phone prior to officers wanting to serve a search warrant.

As officers in an armored vehicle approached the home, according to the documents, McManigal told Lt. Pennington to “call it off and have them think it over … have a rethink.” The statement from officers indicated McManigal shot multiple times at the armored vehicle through a door in his home. When officers were able to gain access to his property, that is when he apparently stopped shooting.

“Stop breaking my s***, I’m coming out,” McManigal stated according to documents. He took off his bullet-proof vest, exited the home and was taken into custody.

“We have at least two counts of attempted aggravated murder for his firing of multiple shots at the police officers, he knew they were there, he fired at them and as we stated in our probable cause statement, he also just sort of said that he stopped doing that because his gun jammed,” said Salt Lake County District Attorney, who stresses that statements made in the probable cause and information documents are purely allegations at this point.

Documents indicate McManigal intended to shoot at a refrigerator filled with an explosive device and only stopped shooting because his gun jammed. He informed officers that he had 10 to 15 gallons of TATP (Triacetone Triperoxide) inside of his home, including in a refrigerator in his garage and some in a tub in the basement. He also admitted to having MEKP (Methyl Ethyl Ketone Peroxide) in his kitchen refrigerator.

“Some of the folks who were responding to that saying that is probably one of the largest finds they have had in a single dwelling,” said Gill. McManigal allegedly had numerous partially constructed bombs attached to a gift, a toilet float and several remote cars. Police believe he intended to deliver the bombs to his sister and Aunt.

In addition to the explosives, three firearms, 17 spent shell casings and over 5,000 rounds of ammunition were located.

According to documents, a court order was granted in 2019, specifically reading “no guns or other weapons” including no purchasing or possessing an AR-15 or a bomb.

“This was not a minimal amount, this was a significant amount and as was been reported that the blast radius was almost 1,000 yards out there,” said Gill about the large amount of explosives. Experts moved explosives located in the upstairs portion of the home and detonated them outside. Others were detonated in the basement, destroying the home.

Due to the highly volatile explosives, over 600 homes and businesses needed to be evacuated.

“That exposure was genuine and real to that blast radius of all those individuals,” said Gill. “I think all the stars lined up that we ended up with no loss of life in sort of this safe conclusion that we did.”

McManigal is being held without bail. Additional federal charges may apply.

“The defendant has a right of presumption of innocence; these are allegations at this point,” said Gill.