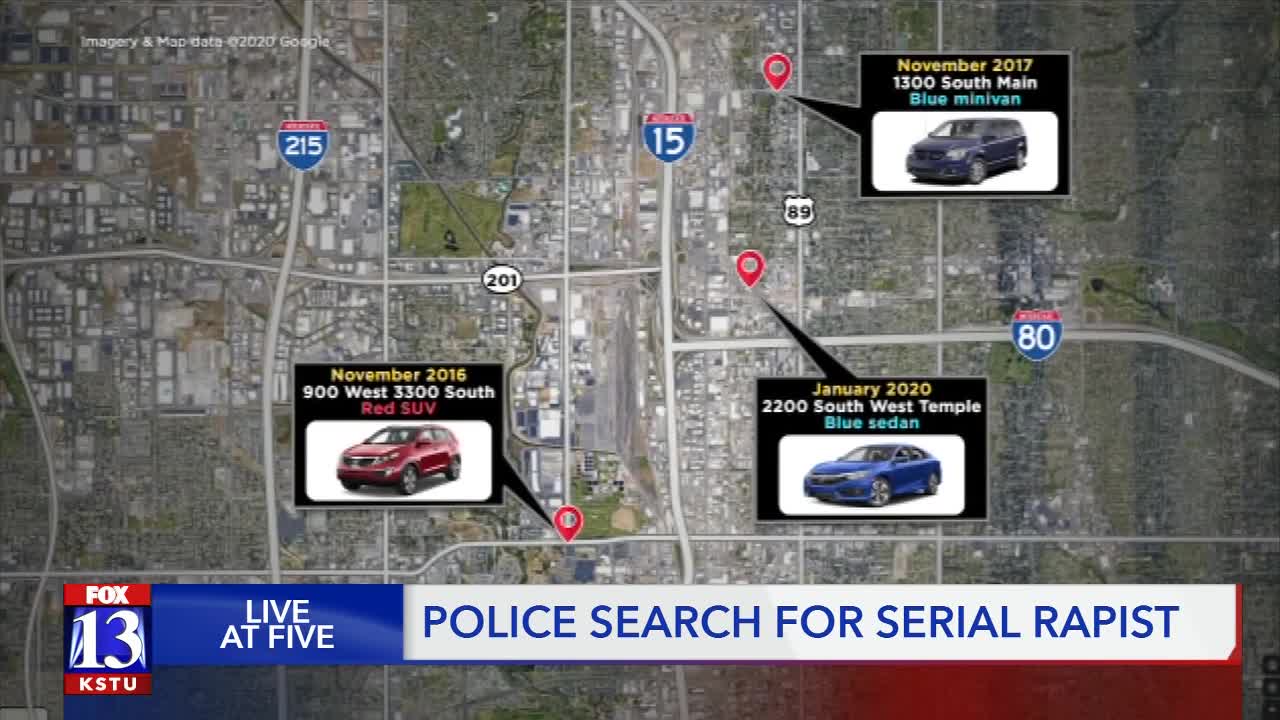 The South Salt Lake Police Department needs help tracking down a serial rapist who officers believe has victimized at least three women over the past four years.

Danielle Croyle, a spokesperson for the department, said investigators have lost contact with all three victims. Investigators are also seeking help to reestablish contact with those survivors.

“The victims that have already come forward are no longer at their known last address. Leads have been exhausted to relocate them or recontact them and locate them,” Croyle said. “These types of cases are absolutely traumatic. They’re emotional. They’re traumatizing, and there may be some reluctance – especially the victims from the earlier cases thinking nothing has occurred on their case.”

The first known case occurred on November 2016 around the area of 900 West and 3300 South, with the suspect driving a red SUV.

The second known case occurred on September 2017 around the area of 1300 South Main Street, with the suspect driving a blue minivan.

The third known case occurred on January 2020 around the area of 2200 South West Temple, with the suspect driving a blue sedan.

South Salt Lake police are asking for help finding a serial rapist and at least three of his known victims.

Investigators say they've lost contact with all three survivors because they've changed their addresses since the crimes took place.

In each case, survivors described the suspect as a Hispanic man in his 30s who offered them a ride. Instead of dropping them off, survivors said the man drove them behind a building to physically and sexually assault them.

Croyle said rape kits have been processed in all three cases and that investigators believe the evidence is connected.

“We believe if we don’t catch this man, he will do it again,” Croyle said. “Because we think it’s a serial rapist, we do have a crime prevention tip: Do not take rides from strangers… Not that it is any fault of the victims that caused this or brought this onto themselves. That is not what we’re saying here, but we don’t want any additional victims.”

“Really what we need to do is make sure that we hold this perpetrator accountable, but we need those victims to assist us and further the investigation,” Croyle said. “We do appreciate those victims that did come forward. They are courageous to come forward in this count… I believe that there’s probably victims out there that – they’ve been reluctant, they’ve either been traumatized or they’re uncertain. We have resources to help them through this process. We have victim advocates. We really are encouraging any victim to come forward.”

If you have any information about this case, please contact the South Salt Lake Police Department at (801) 412-3645 or email SVU Detective Mullins at SMullins@SouthSaltLakeCity.com.