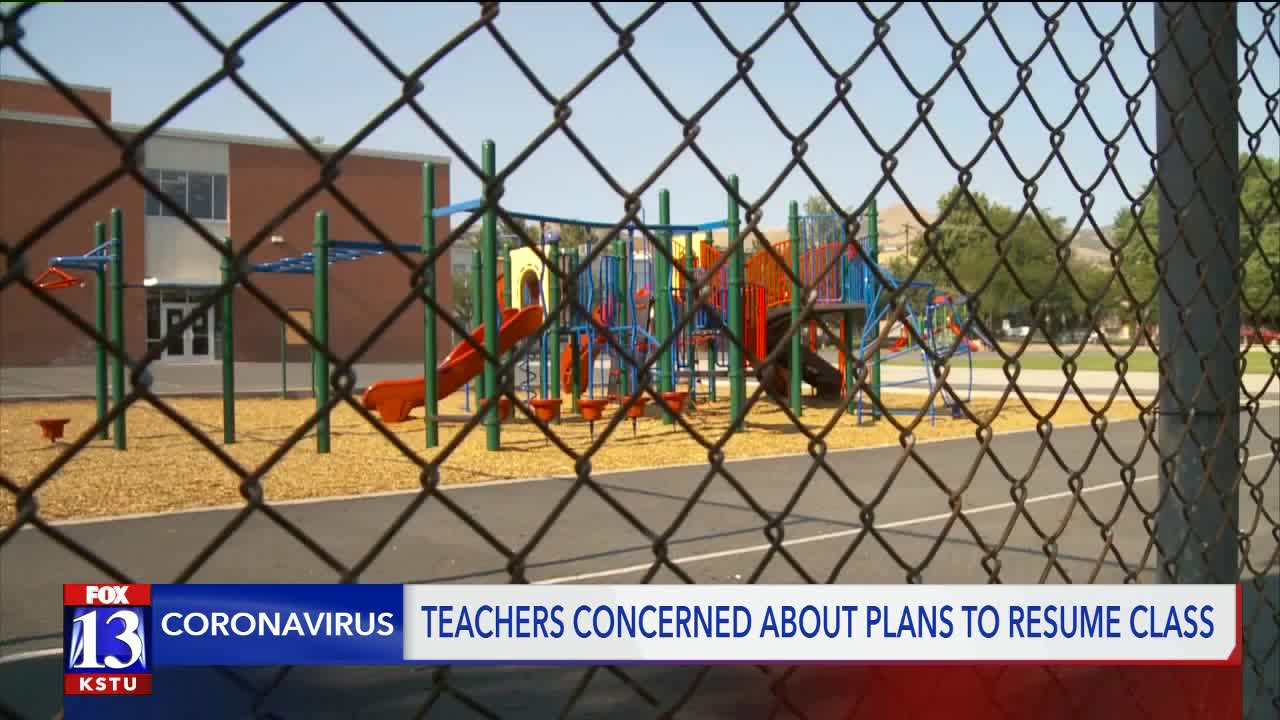 SALT LAKE CITY — As Utah school districts release plans as to how schools will reopen in the fall, some teachers have expressed concerns that school boards do not have their best interest in mind.

For Tracy, the classroom is more than a place where she found her career.

“It’s my life’s passion,” Tracy said. “It is everything.”

In fact, it means so much to her, she has asked FOX 13 to conceal her identity and use a fake name, in order to protect her career.

She has been a high school teacher in the Salt Lake area for five years.

“To watch [the students] walk across the stage at graduation and see that full, big picture and to help them get there, that’s like, I don’t even have words to describe it and I’m a Language Arts teacher,” she said.

When the pandemic hit and schools shut down, she knew eventually there would be big changes.

“I fully realized it’s not safe for these kids to be in this building, it’s not safe for teachers to be here right now,” said Tracy. “We have to get creative with what we can do to move forward, but there’s just too much that’s unknown.”

After months of closures, Tracy said she is seeing just what those "changes" entail, as school districts were given a road-map to reopen.

On the short list, mandatory masks for students and/or teachers, social distancing, extra sanitation and smaller classroom sizes to help keep the distance.

But, despite the requirements, Tracy believes it’s too soon and instead, schools in Utah should not reopen until the state has maintained zero new COVID cases or fatalities for 2-weeks.

“We are going to have a reactionary response to teachers and students dying instead of a proactive one, this is not proactive, this is just applying tetras and bureaucracy to a situation that’s jeopardizing the health and safety of students and teachers,” Tracy said.

While health concerns trump other issues, she believes the goals are unrealistic.

“Have they been in a classroom before?” Tracy scoffed. “I had 45-students assigned to one of my Language Arts classes… that’s the standard, that’s the norm.”

With already overcrowded classrooms and a shortage of teachers and substitute teachers, she believes “It’s completely impossible.”

The Salt Lake School District’s Board of Education currently has three possible plans to help the district move forward in the fall, including ways to reduce class sizes.

“[The proposed plans] still requires, me, a high school teacher, to see 200-students a week,” Tracy explained. “While we will have small classroom sizes in terms of that one class period, I’m still going to see four class periods in that one day, and then the next day, and the day after that so I’m still going to see the same amount of students that I would on a weekly basis in a normal year.”

The Utah Education Association, the state’s largest teacher's union, echoed her concerns for more direction and medical guidance on a per-district basis.

“So far, it’s really seemed like a false choice, do we open schools? Yes or no?” said Heidi Matthews, UEA President. “That doesn’t make sense, we should be asking a different question of when and how.”

Another concern, echoed by UEA, surrounded schools having adequate supplies and resources to keep students and staff safe -- which Tracy fears would fall back on the teachers.

“[School boards] can’t just say, ‘reopen schools in the fall,’ without saying what do we need to do to be able to, not only [to] lay the groundwork in order for that to happen safely in reducing the spread of the virus in our communities, but making sure our schools have the resources to have those hand sanitizers, have those adults in the classrooms and physically distance in the classrooms, and that’s expensive and so far it’s been a lot of unfunded mandates,” said Heidi Matthews, UEA President.

“We’re a little skeptical to say, ‘oh, we’re going to have all of these resources in place to keep you safe in this heightened environment,’ when we don’t know about the availability of the products and for so long we’ve had to rely on donations from parents,” said Matthews, UEA.

Tracy said she and some of her fellow educators, have expressed concerns to their union (UEA), and the superintendent, but have yet to see changes.

“When we get down to the reality of daily exposure, we’re asking teachers to do twice the amount of work and to put their lives on the line every single day, without additional health benefits and without hazard pay,” said Tracy.

Tracy said her worries were amplified after the Salt Lake School District School Board meeting Monday night, following brash opinions from a board member.

“If [teachers] don’t want to teach these kids, even if we’re in the green, then don’t come to work,” board member Michael Nemelka said. “Go find you a different job!”

Nemelka continued to say, “Why are we so worried about something that we don’t know is going to happen?”

“It was extremely disheartening to hear somebody, who’s supposed to be in support of children and education, that he doesn’t care if we die or not,” Tracy said as she shook her head. “Honestly, I cried a little bit because there isn’t any voice of reason happening right now at the district, state, or federal level.”

When asked for comment, the Salt Lake School District said the opinions of one board member did not reflect those of the entire board, or the district.

“Our school board and our district leadership are 100-percent supportive of our teachers,” said Yandary Chatwin, a spokesperson with SLC School District. “I mean, teachers, they’re our frontline.”

Chatwin told FOX 13 giving teachers an ultimatum to show up to work or lose their job was, “not something that we would say.”

In the beginning of May, SLC School District said it provided a feedback survey to all of the teachers in the district. Chatwin said 74-percent of their educators responded with their thoughts on remote learning and what was important to them moving forward.

“We hope that we’ll be able to open in person at least on a partial basis, but depending on how the health crisis goes, especially in Utah, we may end up in a full dismissal again,” said Chatwin. “We are just really trying to prepare for all scenarios and make sure we can support all of our teachers and students.”

Still, UEA reiterated, Tracy isn’t the only educator in the state that has expressed concerns.

“Simply opening schools with a, ‘here’s the best that we can do,’ plan… it’s not sufficient, it doesn’t go far enough,” Matthews said. “We need more, and we need to know that the resources are going to be there to ensure the safety of our kids and the adults in our classroom.”

Matthews elaborated further, saying most districts did not have guidelines telling them what to do if a staff member or student contracted the virus – in terms of who would need to isolate, quarantine, if sick pay would be allotted, etc.

“The way that our school districts in our state approaches this reopening of schools is either going to help or hinder [teacher retention] and we have to be really careful and take care of the important adults that we have in our school, so they don’t feel like they’re risking their lives, their families lives,” Matthews continued.

FOX 13 asked Tracy if she would quit or continue to go to work, if changes are not made to the existing plans – she chose a third option.

UEA said they would provide a “unified front” behind their members and their demands, however, they do not believe a strike is the answer.

“I think that our teachers have been so amazingly resilient and strong, and need to be a part of this process so they can be empowered and the best teachers that they can be for our students and do it in a way that doesn’t polarize our communities even more,” Matthews concluded.

For the latest on the COVID-19 response in schools, click HERE.