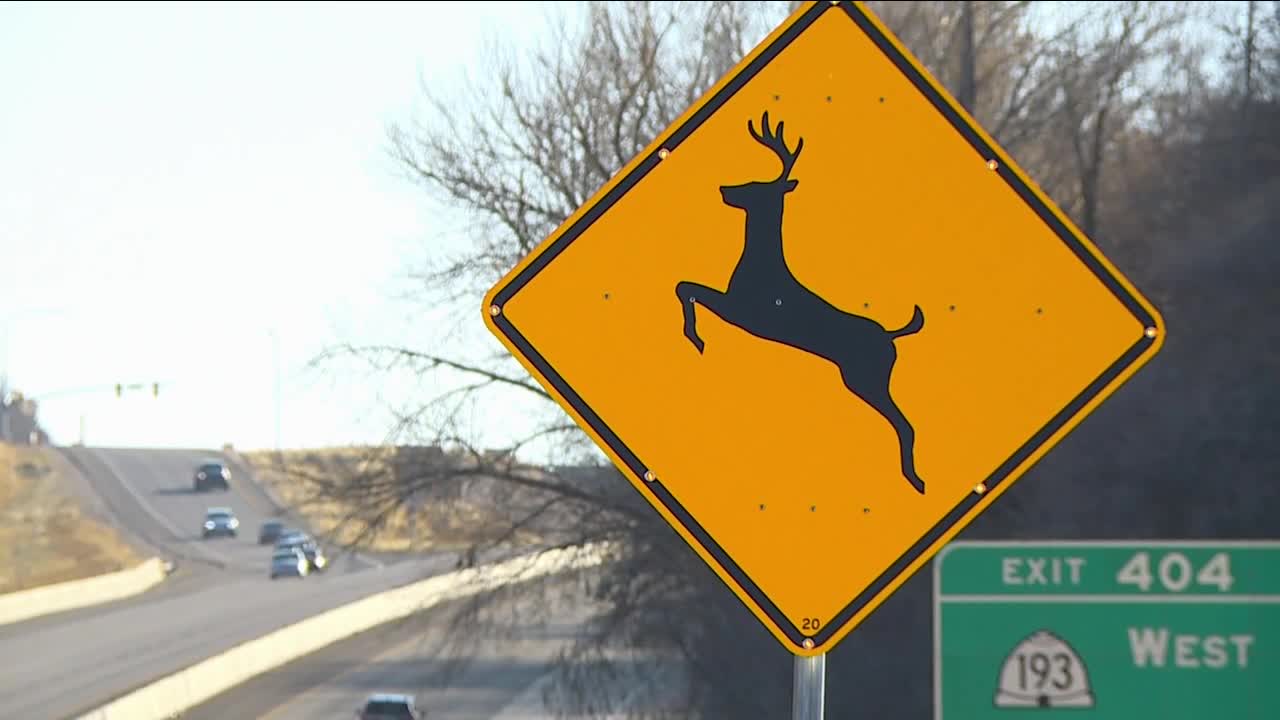 Now is the peak season for vehicle and wildlife collisions, and state officials are warning drivers to be on the lookout while on Utah roads.

DAVIS COUNTY, Utah — Utah Highway Patrol and the Division of Wildlife Resources said now is the peak season for vehicle and wildlife collisions. They are warning drivers to be on the lookout while on Utah roads.

"Between the past five years or so, there's been almost — throughout the state of Utah — 15,000 car and deer accidents," said UHP Trooper Michael Gordon.

Gordon has worked Highway 89 in Davis County for the past three years and has seen many collisions.

"I think the most odd thing that I've seen is a vehicle that hit a cougar," Gordon added.

He said the stretch of highway in Davis County sees a lot of wildlife, and collisions average in the triple digits every year.

In November and early December, drivers can expect to see an increase of wildlife on roads. According to Daniel Olson, the wildlife migration initiative coordinator with the DWR, this is due to seasonal migration changes.

"It's the time of year when animals move from their high elevation summer ranges down to the winter ranges in the foothills," Olson said.

He added that with the recent time change, more drivers are on the road during twilight hours when wildlife are more active — 7 a.m. and 5 p.m. when commuters are either headed to or from work.

I-80 through Parleys Canyon is another area where a lot of collisions happen every year.

"As the traffic [has] gotten busier on I-80, it's becoming more difficult for animals to be able to cross safely," Olson said. "And for drivers to be able to navigate that interstate safely."

To help reduce accidents, UDOT and DWR teamed up to install a wildlife crossing bridge above Parleys Summit two years ago.

"[It's had] a two-fold benefit of making the roads safer for our drivers, keeping the wildlife off our roads, and also allowing wildlife to still move across the landscape," Olson added.

He says the bridge has been very successful and has seen a lot of animal traffic since it's gone up.

"We've seen moose, deer, cougars, bobcats, coyotes, bears, porcupines," he said. "So, it's just been incredible the amount of use that bridge has seen just in the year that it's been in place."

For areas that don't have wildlife bridges, like Highway 89, UHP has a couple of tips for drivers to stay safe.

"Reduce your speed, look ahead of where you're driving. Your field of vision doesn't end right at the hood of your vehicle," Trooper Gordon said. "Make sure you're looking ahead for other road hazards and things of that nature."

Trooper Gordon said the extra attention could save you thousands of dollars and potentially your life.

"I've seen accidents ... ranging from just minor undercarriage damage, like the bumper being cracked, to the whole entire vehicle being totaled with airbags deployed," he said.

DWR is looking at Eagle Mountain, as well as near Echo Reservoir, as other possible locations for new animal bridges and crossing areas. Olson said Eagle Mountain is one of the fastest growing areas in the state and is becoming a hotspot for wildlife collisions.