UHSAA to vote on adding boys volleyball as sanctioned sport 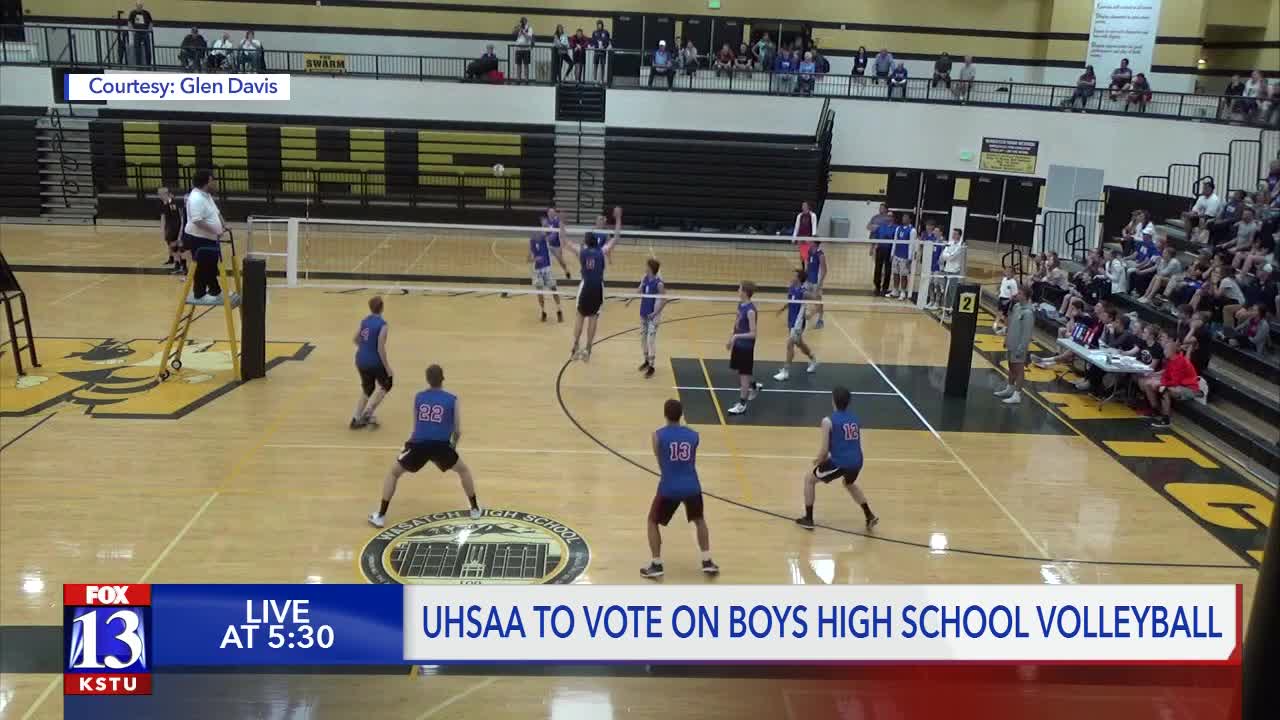 An upcoming vote from the Utah High School Activities Association (UHSAA) will determine whether or not boys volleyball will become the beehive state’s next sanctioned sport – while it’s not a sure thing, some proponents are hopeful.

MIDVALE, Utah – An upcoming vote from the Utah High School Activities Association (UHSAA) will determine whether or not boys volleyball will become the beehive state’s next sanctioned sport – while it’s not a sure thing, some proponents are hopeful.

“This is so exciting kids,” a boy can be heard joking as a small group of friends and former volleyball teammates, set up to do a few volleyball drills at their South Jordan home.

Even during a pandemic style practice, the young men gave their backyard practice their all.

For some, who are Bingham High School seniors, their volleyball season was cut short by the pandemic. Flash black to a few months ago, you can see video of them playing against another team at their school’s gym as fans cheered in the stands.

It looks like any other high school sport – the thing is, boys volleyball isn’t considered one.

“It really does frustrate me because so many times I would be playing and it would just feel like there wasn’t any support, even though it’s a really great sport,” said Price. “High school sports are so much more well organized, well-funded, and I feel like boys volleyball deserves that funding.”

Right now there are a reported 100 Boys Volleyball teams at 57 different UHSAA recognized schools across the state.

Despite a growing demand, boys volleyball remains one of just two sports that are not sanctioned for both genders – volleyball and drill team.

To make matters worse for local players, Utah is home to the number one collegiate men’s volleyball team. But as club players without a sanctioned team, they said when BYU is scouting, it’s not them they’re looking for.

“We don’t get recognition as players at all because we have a lot of skill here and like BYU, they have 3-percent of their recruits from Utah and their women’s team has 80-percent of their recruits from Utah,” Price explained. “There’s so much potential in Utah and it’s not really getting looked at, it’s getting overlooked because it’s not sanctioned it’s just a club sport.”

“There was so much more we could have had, support from the school, recognition from colleges if it was actually sanctioned, but because it’s simply a club it’s very hard for college coaches to come and look at us,” said former Bingham High volleyball player, Nate Applegate.

A few years back, the Utah Boys Volleyball Association was formed in the hopes of one day, seeing the sport become sanctioned.

“We definitely want boys volleyball to be an official sport in the high schools here in Utah,” said UBVA president, Jill Davis. “It’s a very easy sport for [UHSAA] to implement, girls’ is already sanctioned so they already have all of the equipment, they’re already familiar with the sport, we have a huge network of coaches if they need that, so we feel like it’s pretty seamless to adopt.”

Last fall UHSAA introduced new criteria, creating a clear set of guidelines as to how a sport could become classified as an ‘Emerging Sport’ and then, ultimately, a ‘Sanctioned Sport.’

According to the UHSAA handbook, in order to become a sanctioned sport for males or coeds, a minimum of 30-percent of recognized schools need to sponsor it as an ‘emerging sport.’

Upon reaching that threshold, the UHSAA Female Equity Committee would then be tasked with determining whether or not the sport met any of the 15 new criteria items (listed below), before deciding to elevate it to a sanctioned sport.

a) The impact on Title IX compliance

b) The percentage of member schools that facilitate interscholastic competition in the emerging sport.

c) Participation in community-sponsored leagues for the sport

f) Whether the sport is a lifetime sport or activity, easily accessed in later life, that contributes to public health or fitness

i) Significant obstacles to growing the sport, such as lack of facilities, expensive equipment, risk of injury, lack of experienced coaches and officials

n) The burden on member schools, districts and on the UHSAA of sanctioning the emerging sport

“We qualify for what they ask of their emerging sports policy to qualify,” Jill said. “[UHSAA] wanted 30-percent participation at a school, we came in at 33-percent.”

Now, months after the new criteria guidelines were announced, UHSAA is finally putting it to a vote. Still, that does not mean the committee will agree with the information presented by UBVA – meaning it could still be turned down.

“Are we disappointed? Are we frustrated? Yes, of course, in some ways -- but at the same time we’re also hopeful,” Jill said. “We’re just hoping they give us the green light.”

“So many boys that are younger than me deserve something that I didn’t get before,” Price added. “I want it to be a lot better than it was for me because it would just give them so much more joy.”

FOX 13 reached out to UHSAA for comment, they confirmed the vote will take place on Thursday and said they could provide a statement after it’s done.