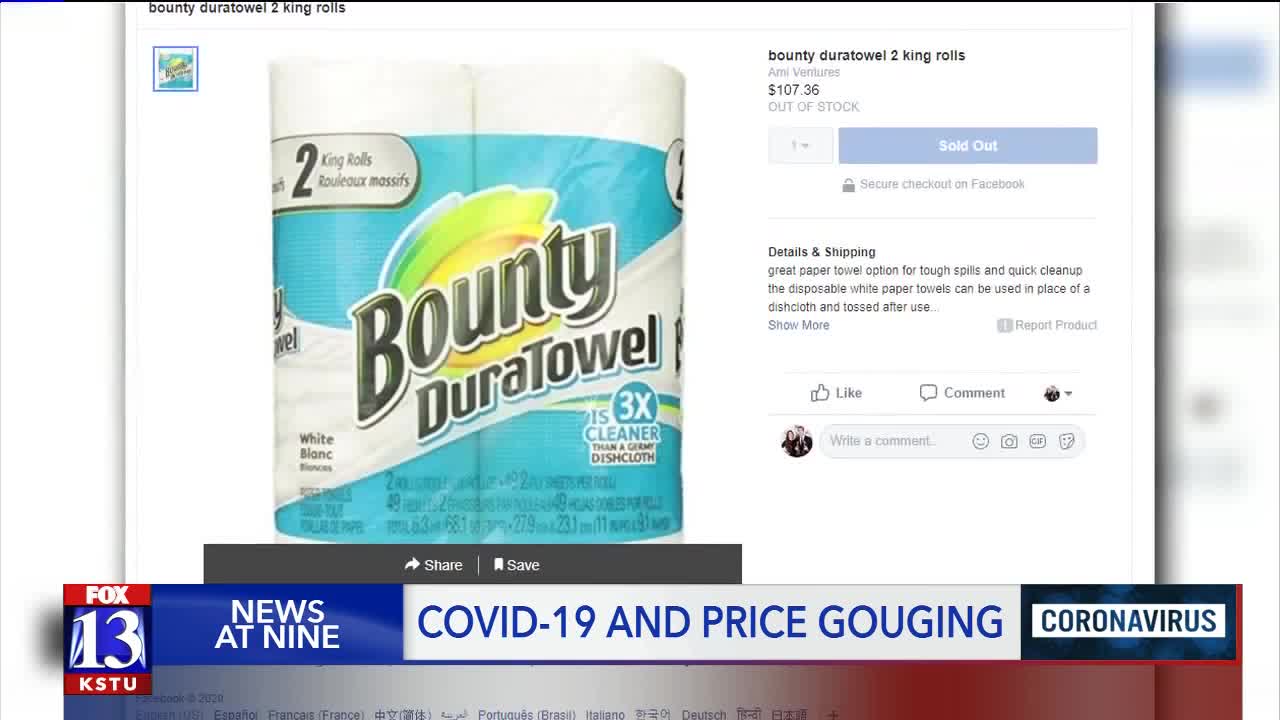 The Utah Attorney General’s office wants people to be on the lookout for price gouging due to the outbreak of the novel coronavirus.

SALT LAKE CITY — The Utah Attorney General’s office wants people to be on the lookout for price gouging due to the outbreak of the novel coronavirus.

Although both the state of Utah and the United States of America are now in a state of emergency for the COVID-19 pandemic, some people are charging an excessive amount for basic items like toilet paper, water, hand sanitizer, cold medicine, and even baby formula.

Kimberlee Scott, who lives in North Salt Lake, said she has been struggling to deal with the same new problem most everyone is now facing – trying to find toilet paper.

“I went to seven stores on Friday and found nothing,” Scott said. “Every store I went to, the only things that were left was like beans and a few boxes of cereal. Other than that, everything was cleaned out.”

Scott said one of her last-ditch efforts was to try a local gas station in Kaysville.

She said she got a strange response from an employee.

“I just walked in and said, ‘Hey! Dumb question, do you guys have toilet paper?’ and the lady’s like, ‘No, my husband came in earlier today and bought everything out and I’m selling it across the street,’” Scott said. “Yeah. 30 dollars for a 12 pack.”

FOX 13 is not identifying the name of the gas station, which was closed on Sunday and unavailable for comment.

Scott said she doesn’t want to see the employee fired and holds no ill will towards the gas station.

“It’s not their fault. It’s the people that are working there and stocking up,” Scott said. “(She should) maybe just be retrained or given a warning… definitely shouldn’t be profiteering from a pandemic.”

Price gouging may be even more prevalent online than at local businesses.

FOX 13 discovered most posts are simply a joke. Still, if someone accidentally clicks the wrong button and spends money, that joke could turn into a crime.

PRICE GOUGING -- Most posts like this are just a joke... but what if someone accidentally clicks the wrong button and spends the money?

That joke could turn into a crime. pic.twitter.com/2xwe4cqJ1j

Some listings online are from actual businesses.

Ami Ventures, an ecommerce website claiming to be within 40 miles of Salt Lake City, has a large number of listings for expensive paper towels.

One of the company’s listings asks for $107.36 for a two-pack of Bounty paper towels.

PRICE GOUGING -- These online postings do not appear to be just a joke.

The company "Ami Ventures" claims to be within 40 miles of Salt Lake City.

Various customers say they have tried to buy other products (not paper towels) via Facebook. They accuse the site of being a scam. https://t.co/Sc9uyGxBH5 pic.twitter.com/fdZ3re6iUo

Various customers who have attempted to buy a variety of other products say the website is a “scam.”

At the time this article was published, the Ami Ventures Facebook page had 499 likes and 15,651 followers.

The company has not responded to FOX 13’s request for comment.

If it weren’t for the state of emergency, people or companies could charge whatever they want.

According to the Price Controls During Emergencies Act, an “excessive price” is defined as “a price for a good or service that exceeds by more than 10% the average price charged by that person for that good or service in the 30-day period immediately preceding the day on which the state of emergency is declared.”

The Utah Attorney General’s office is planning to provide more details on its efforts to stop price gouging on Monday.