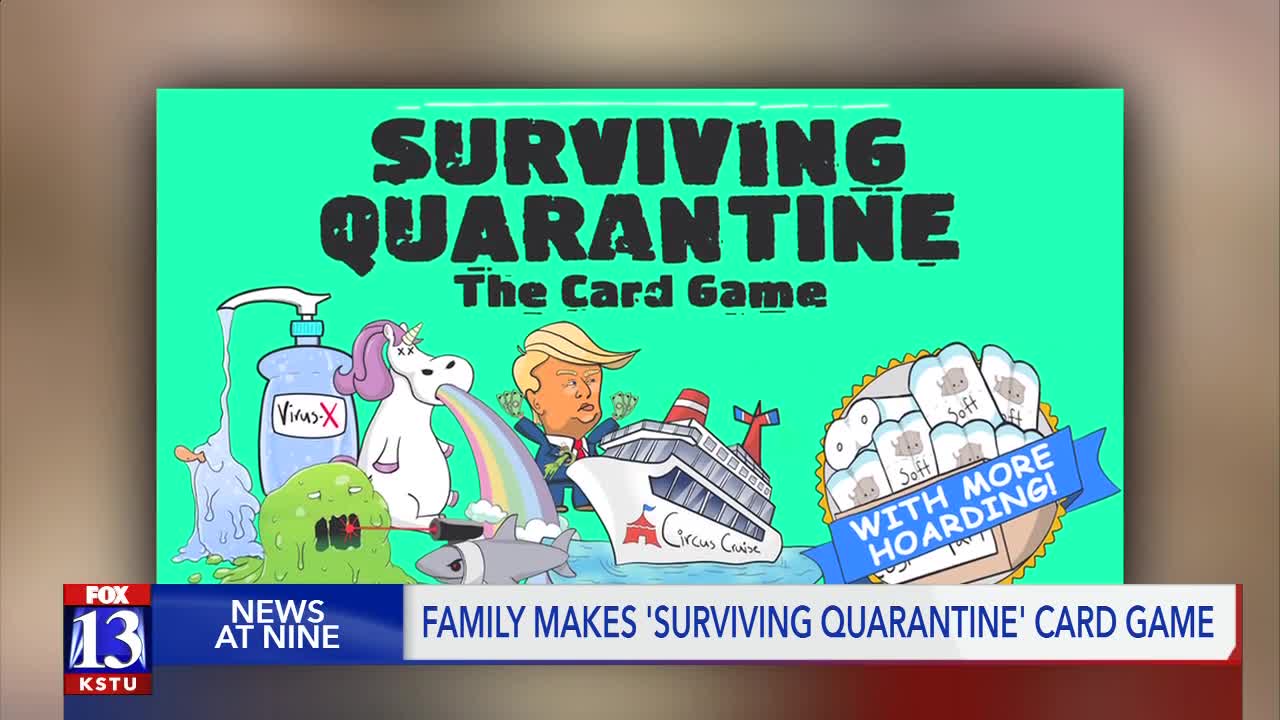 Using current events, a little creativity and a lot of humor, one Utah family has created a pandemic-themed game to help teach their kids about real life moments in a light-hearted way.

HEBER CITY, Utah – Using current events, a little creativity and a lot of humor, one Utah family has created a pandemic-themed game to help teach their kids about real life moments in a light-hearted way. Now, the game is ready to be shared with everyone ‘Surviving Quarantine.’

‘Viruses,’ ‘vaccines’ and ‘bailouts’ – you hear the words practically every day, but you probably haven’t seen them portrayed in a card game.

“There’s a bunch of crazy viruses, throwing up unicorns, laser sharks… you name it, this game has got it,” said Dallas Brown as he sat with his wife, Nicole, and their four kids.

Looking at the cards, the game is essentially a play on the pandemic.

“We saw all the things that were happening, all the hoarding that was going on and everybody getting mad at cruise ships and all these other things, and it was basically a cartoon,” Dallas said.

The rules are simple: avoid the viruses, use vaccine and antidote cards to protect yourself and survive another round.

Players draw from the deck of cards donning brightly colored cartoons -- if you draw one of the 20 virus cards, you can give it to another player. That player can then use antidote or vaccine cards to block the virus and survive another round.

Some of the vaccine cards feature a hand sanitizer shower, toilet paper armor or a water bottle fort.

“There’s a man in a fortress of water bottles and that’s what will keep him safe,” said Nicole. “We feel like that’s what people must have thought with all of this water bottle collecting and toilet paper hoarding, that it was going to keep them safe somehow, because otherwise, why?”

The game also comes with ‘bailout’ cards to help players survive longer, laser sharks to instantly destroy the last card played, and even an ‘anti-vaxxer’ card which requires the player to return all vaccine cards to the deck.

“If they can’t get the virus away from them with an antidote or a vaccine card, they’re out of the game and the last player standing wins,” said Dallas.

After months of work, the game is now ready for production. But the Browns' love of games was years in the making.

Rewind two years, the Brown family decided it was time for a change of pace. They sold their Provo, Utah home, put all of their belongings in storage and moved their family of six to Europe. Over the next year, they spent time in 45 different cities in 15 different countries – that’s where their love of games was born.

“We loved it and we played a lot of games because we didn’t bring our TVs, our Xboxes, our iPads, anything,” said Dallas. “[The kids] saw culture and we had a lot of free time so we picked up loving games.”

About three months before the pandemic hit, the Browns came back to Utah for a job opportunity in Heber. Dallas started working to build an app that would help families find activities and have fun – most of which soon came to a screeching halt.

“The business wasn’t able to launch like we wanted and COVID hit so we weren’t able to go back to our full-time traveling schedule, so we were just kind of stuck at home,” said Dallas. “We were stuck with a bunch of free time, we decided to see if we could create our own game and that’s when we came up with Surviving Quarantine.”

Creating cards and drawing prototypes on index cards quickly became a family activity. But what started as a way to help the Browns ‘Survive Quarantine’ turned into a teaching moment.

“At first we were trying to keep everything away from the kids, we didn’t want them to know everything that was going on because food shortages and running out of supplies in our local stores, things like that -- people dying, this is such a horrible situation that no one wants to live through,” Nicole explained.

“Then it’s like, how can we bring it in and make it on their level where they can understand it and appreciate it and not scare them and still be aware of what’s happening?” she continued. “I think [the game] was kind of our bridge to do that.”

Now, they have a finished product that they’re ready to share with the world and enough laughs to last a lifetime.

The Browns need to fundraise to bring the game to fruition. Starting Tuesday, their funding platform will go live. They will have 30 days to raise the $10,000 needed to produce and package the game. Anyone who donates at least $20 will receive a copy of the game once it is made.