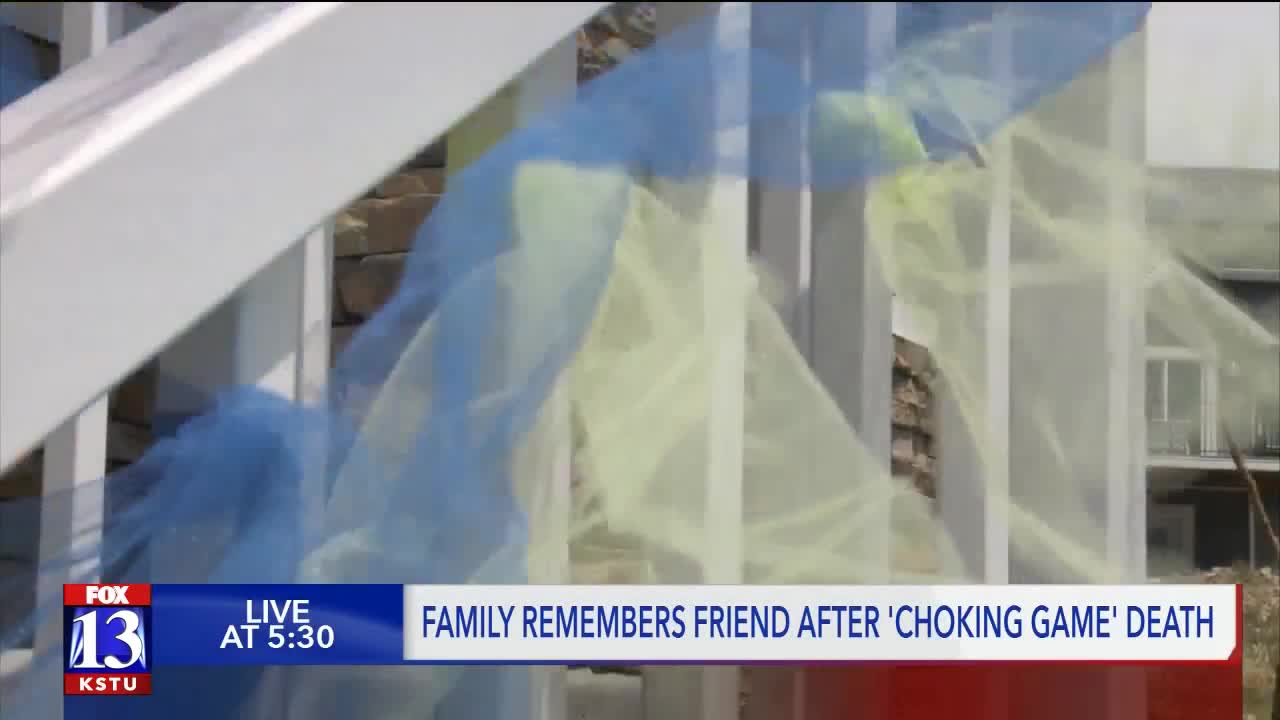 A Utah mom is sharing a warning after her son lost a close friend to the “Choking Game,” a deadly trend where oxygen is cut off to the brain until consciousness is lost for a temporary high.

EAGLE MOUNTAIN, Utah – A Utah mom is sharing a warning after her son lost a close friend to the “Choking Game,” a deadly trend where oxygen is cut off to the brain until consciousness is lost for a temporary high.

At the Hatch family’s Eagle Mountain home, blue and Green ribbons are scattered across the trees, bushes and entryway.

“He was one of my best friends,” said Isaac Hatch as he sat in front of a row of neatly tied bows.

The tiny pieces of mesh-material, holding the memory of a dear friend.

For Isaac, the loss is still fresh.

“I think a little part of me died the day he killed himself,” Isaac said.

A week ago, the 15-year-old had to bury his best friend.

“I saw him there, lying down, and I couldn’t keep it in anymore,” said Isaac.

“He was just anxious for his mom to get back from the store so he could go out with some other friends,” Claudine continued. “His buddy’s showed up at his house to pick him up and there were firetrucks and things in the driveway… it was just so devastating.”

The boy’s family told Claudine their son was in his room alone when he tried to partake in what’s called the “Choking Game.”

“I felt so naïve, you know you talk to your kids about, ‘stay away from drugs, don’t smoke, don’t drink,’ you know all of these things and I had never even heard of it,” Claudine said.

The deadly fad has been around for decades -- teens force themselves to pass out for a temporary euphoric or high feeling.

The family told Claudine they believed it was the first time their son had tried it. The family did not want to share their son’s name or face, but gave Claudine permission to talk to FOX 13 to help raise awareness.

“It seems so harmless, you’re just not breathing for a couple of minutes,” said Claudine. “It’s not a game, it’s deadly.”

Isaac said he didn’t know what the trend was prior to his friend’s death.

“It’s kind of scary, I know vaping and drugs are already bad enough… but this is worse because if you mess up, you’re dead,” said Isaac.

Isaac’s friend is not the first to lose his life to the game. However, the exact number of deaths it has caused is not known and said to be difficult to track.

In 2008, the Centers for Disease Control and Prevention conducted a study on deaths from the Choking Game. From 1995 to 2007, the study found at least 82 youths between the ages of 6 and 19 lost their lives to unintentional strangulation while playing the game.

While the CDC has not conducted a similar study since, there is no data to suggest those numbers are dropping.

In a recent report, TIME cited more data from the CDC, stating more than 1,400 children and teens died from accidental hanging and strangulation from 2000 to 2015.

“There’s all these online tutorials, so kids learn how to do it themselves, that’s what’s scary,” said Claudine. “Had somebody been in the room with him, the outcome could have been different.”

According to The Guidance Group, parents should pay attention to the websites their children visit and keep an eye out for sites or searches that include the words, “passout,” “blackout,” “space monkey,” “space cowboy,” “knockout,” “gasp,” or “rising sun.

There are also symptoms parents can watch out for including; reports of severe headaches, marks on the neck, bloodshot or red eyes and raspy breath. Parents should also note what bags, belts and ties can be found around the house and pay attention to closed doors or an unusual need for privacy.

While this is nothing new, for the Hatch’s this is the first time it has hit close to home. Now, as the Eagle Mountain community continues to heal, they hops others can learn the very real consequences of playing a so-called, “game.”

“It’s not worth it,” Isaac added. “Don’t risk your life just to get high.”

Claudine said her son’s friend was one project away from getting his Eagle Scout. In his honor, his friends plan to complete a project for him so he may be awarded the designation posthumously.

Parents who believe their child may be taking part in the Choking Game can find more resources HERE.