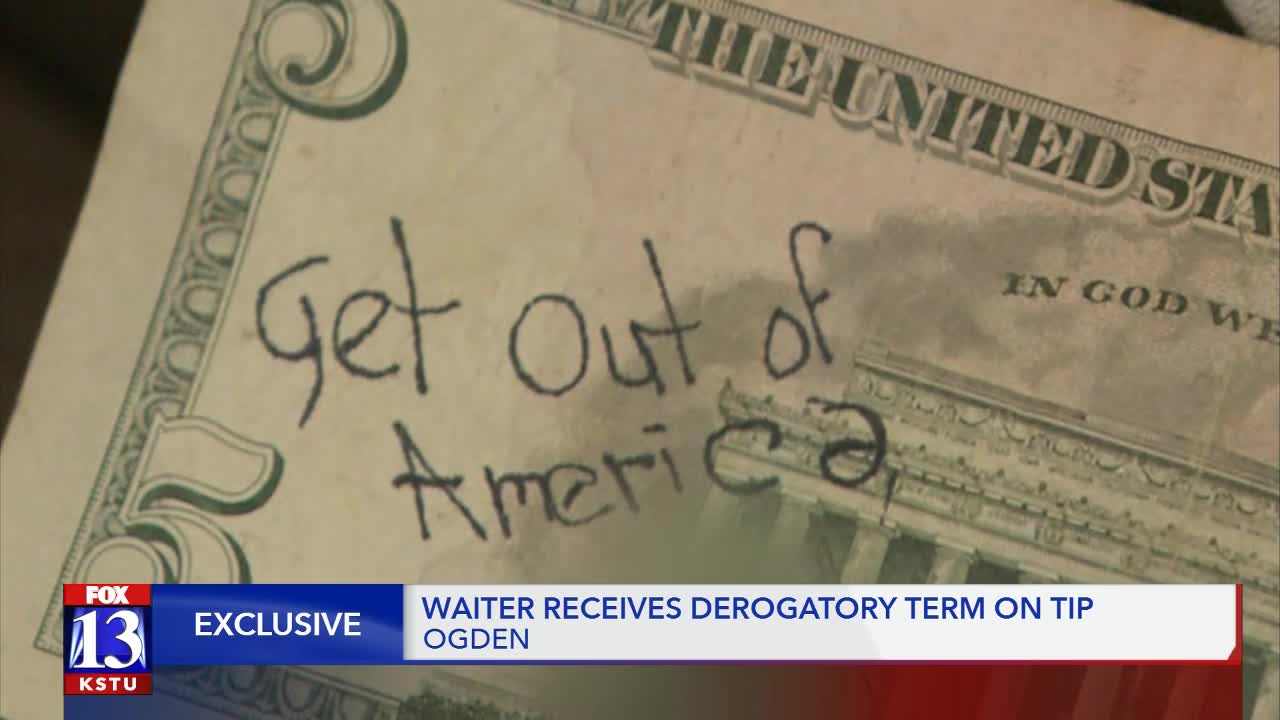 A waiter at an Ogden restaurant is sharing his story after finding a bigoted message written on a cash tip that was left for him.

OGDEN, Utah — A waiter at an Ogden restaurant is sharing his story after finding a bigoted message written on a cash tip that was left for him.

“Keeping it in my wallet,” Ashton Bindrup said as he pulled out a wrinkled $5 bill. “I haven’t wanted to turn it into the bank yet, I don’t know how to explain that one.”

The cash has been tucked away in the back of his bifold since his shift at an Ogden restaurant on Saturday.

“I picked it up and was immediately like, ‘Oh, this is written on my tip,’” Bindrup continued.

The bill was marked in pen with the words, "Get out of America, F**!"

The message contained a three-letter gay slur, which he said was left behind by three adults — all of whom were wearing "Trump 2020" hats.

Looking back on his interactions with the table, Bindrup believes the group deliberately wrote it on his tip.

“They’d asked me for a pen during the meal,” he explained. “They paid with card, but it was all an electric system so there was no receipt… that’s why I thought it was odd when they asked for the pen.”

“I think if anyone got it, they would think it was hate speech,” Bindrup continued.

In the state of Utah, there are penalties for hate crimes. However, written speech is only considered a punishable offense if there is a threat of violence.

The only other recourse that could be taken involves defacing currency.

According to U.S. Code, anyone who defaces a bill so that it is unfit to be reissued can be fined or face six months in jail. The law states:

"Whoever mutilates, cuts, defaces, disfigures, or perforates, or unites or cements together, or does any other thing to any bank bill, draft, note, or other evidence of debt issued by any nationalbanking association, or Federal Reserve bank, or the Federal Reserve System, with intent to render such bank bill, draft, note,or other evidence of debt unfit to be reissued, shall be fined under this title or imprisoned not more than six months, or both."

Since the bill Bindrup received now contains profanity, it can’t be reissued and, arguably, fits the law. Still, he said he’s not chasing legalities.

“I wish that they had said it to my face,” Bindrup continued. “I’m not quick to anger or quick to be offended, but I don’t know. You have to think about that kind of hate. You have to wonder, ‘How does someone get to that point?’”

“They actually tipped me really well,” Bindrup laughed. “It was only a $22 bill and they gave me a five for it, so it was like a 27 percent tip.”

And he's sharing a message of acceptance, even if what’s written on the bill is the opposite.

“We have to help people become not so biased,” he said. “This needs to be a learning opportunity, above all else, because there’s hate speech out there and we can all do our part to say things differently.”