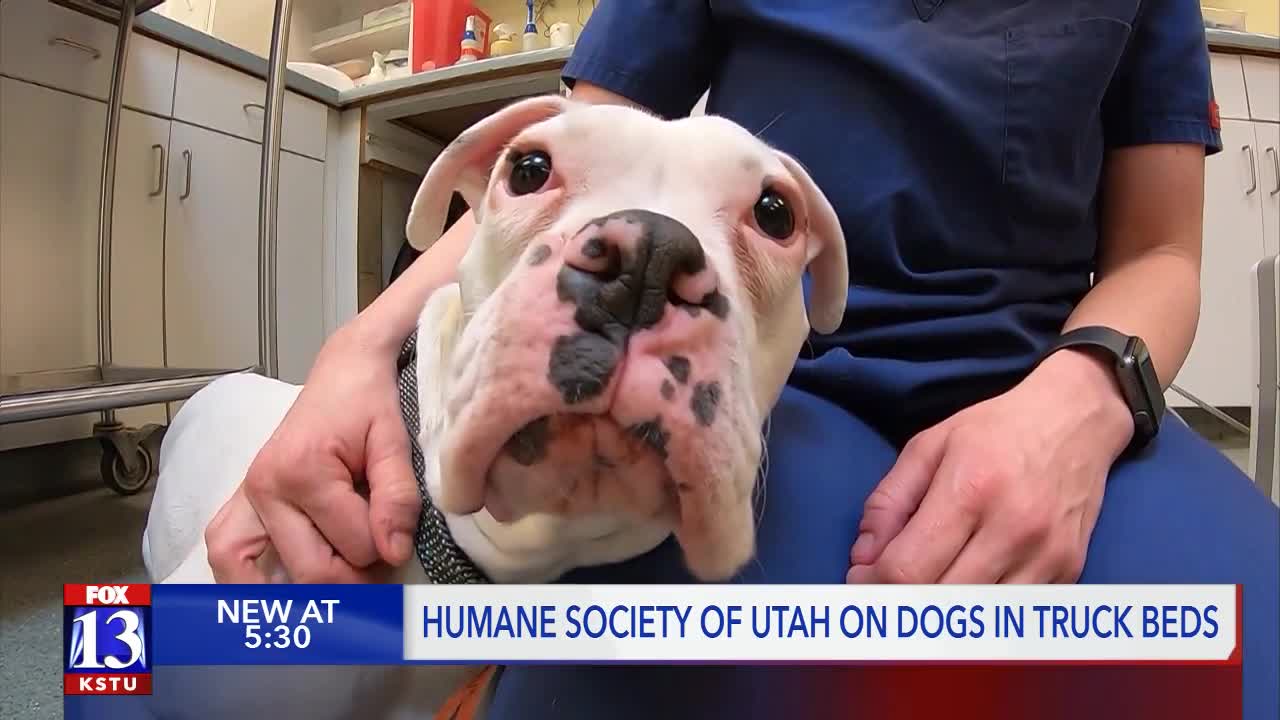 MURRAY, Utah — After receiving a video of a dog balancing in the back of a flatbed truck on a Utah highway, the Humane Society of Utah is urging the public not to put dogs in truck beds.

The Humane Society of Utah sees it every month… a variety of calls, emails, messages on social media and in-person comments, with one main concern – the person saw a dog riding, unrestrained, in the back of a truck on the highway.

The organization has seen it time and time again but a recent video, submitted to them by a concerned citizen, left employees in shock.

In the video you see a flatbed truck flying down I-15 at more than 70 miles-per-hour and a dog balancing, unrestrained, on the bed.

“The first thing you think is, ‘oh my gosh, that poor dog,’” Shepherd said.

For some, the video is hard to watch. But, Humane Society of Utah decided to post it to their Facebook page, in the hopes of spurring conversation and change.

“Not only is it completely dangerous for the animal, but for the other motorists driving around,” said Shepherd.

Within hours of being posted, the 8-second long clip gained thousands of views and hundreds of comments, some expressing frustration and disgust, others sharing similar things they had seen.

Arizona Humane estimates at least 100-thousand dogs die in accidents each year because they were riding in a truck bed. Still, despite the dangerous nature to dog and driver, the act is not illegal.

“There’s nothing to do, it can’t be reported to the authorities,” said Shepherd.

“We’ve worked on legislation in the past, it’s a very difficult thing, we were not able to pass this as a law,” she continued.

In fact, in the state of Utah, the only way an owner can face charges is if the animal dies or is injured in an accident while unrestrained.

“Injury or death to a dog caused by an accident where the animal is riding unrestrained in the back of a truck can result in animal cruelty charges,” Utah Humane cites on their website.

There are some areas in the beehive state where ordinances have been put in place. Salt Lake County, for example, has a section in its municipal code pertaining to animals in vehicles.

The code states in part: “Persons transporting an animal in the open bed of a vehicle must physically restrain the animal in such a manner as to prevent the animal from jumping or falling out of the vehicle.”

“We get calls, we get people contacting us, they’ve seen an animal riding in the back of a truck bed and they’re very concerned,” said Shepherd. “All we can do is just say, ‘it’s legislation we want to pass.’”

Deann said, in extreme instances, dogs that have fallen or jumped out of truck beds have even wound up at their shelter.

“We see animals, unfortunately, that are surrendered to us that have fallen out of the back of truck begs and broken their legs and then the owners can’t afford the medical attention for that pet.”

Deann said it’s a scary reality, but it’s one they believe can change.

“So many families consider pets members of their families,” Shepherd said. “We realized how dangerous that was for children, it’s the same case for your pets.”

When transporting a dog, Deann said it is best to secure them in the cab. If that is not an option, the dog should be placed in a crate that can be secured to the bed of the truck.

Humane Society of Utah is constantly working to create legislation to prevent truck bed associated dangers. Utahns who would like to learn more about their efforts and how to get involved, can email advocacy@utahhumane.org for information on how to reach out to lawmakers.