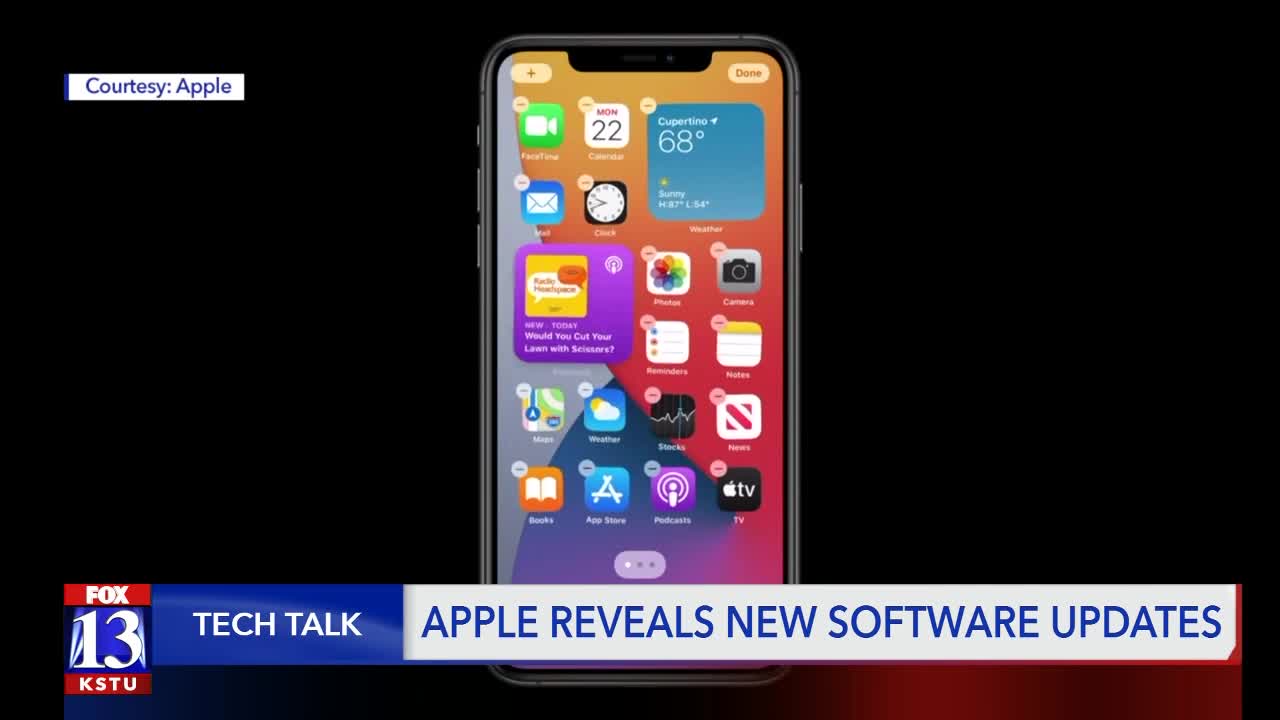 CUPERTINO — Apple's Worldwide Developers Conference (WWDC) kicked off on Monday with a virtual presentation of its latest and greatest updates and the tech company didn't hold back.

iOS 14 introduces a major update to Home Screen pages with redesigned widgets, the App Library, App Clips, and updates to Messages, and more.

The new widgets present timely information at a glance and can be pinned in different sizes on any Home Screen page.

You can also create a Smart Stack of widgets, which uses on-device intelligence to surface the right widget based on time, location, and activity.

Home Screen pages can display widgets that are customized for work, travel, sports, entertainment, and other areas of interest.

App Library will now sit on the last page of your home screens.

It's a new space that automatically organizes all of your apps in one place.

They're organized by suggested apps that you use often, recently added ones, followed by categorized ones based on app types.

Users can choose how many Home Screen pages to display and you can now hide pages for quick access to the App Library.

Incoming FaceTimes, phone calls, and Siri interactions will have a compact design in iOS 14 that no longer takes up the whole screen space and stop you from what you were doing.

iPhone users will now be able to watch a video or make a FaceTime call while using another app with the addition of picture-in-picture.

App Clips give you almost instant access to a small part of an app to let you complete a specific task, such as renting a scooter, buying a coffee, or filling a parking meter.

They can be easily accessed by scanning a new Apple-designed App Clip code, through NFC tags, QR codes.

The messages app will now let you pin conversations to the top of your messages list.

Group chats are also getting updates that are similar to Slack with mentions and inline replies.

The maps app also gets a makeover in iOS 14 with new cycling directions, electric vehicle routing, and curated Guides.

All apps will now be required to obtain user permission before tracking.

As part of this, App Store pages will feature summaries of developers’ self-reported privacy practices.

Apple says they will be displayed in an easy-to-understand format.

You will also have the option to choose to share your approximate location with app developers, rather than your exact location when granting any app location access.

The new iOS will also come with its own translation app that works online and offline in 11 different languages to start.

It can also detect two-way conversations and automatically translate according to the languages it's picking up.

Digital car keys will also be added to iOS 14 and iOS 13 starting next year with BMW already on board.

Adaptive Lighting for compatible HomeKit-enabled lights automatically adjusts the color temperature throughout the day, and with on-device Face Recognition, compatible video doorbells and cameras can identify friends and family.

The Find My app will now support third-party products and accessories with the new Find My network accessory program.

This will let you use the Find My app to find other important items, as well as Apple devices.

Safari will now offer a Privacy Report so you can see which cross-site trackers have been blocked.

You also get password monitoring to help you detect saved passwords that may have been involved in a data breach, something Google Chrome already offers.

There will also be built-in translations for entire webpages on Safari.

New software features will be available in Fall 2020 as a free software update for iPhone 6s models and later.

Watch faces will now be shareable through things like messages, websites, and social media.

watchOS 7 will also have its own sleep tracking built-in, so there's no longer any need to download a third-party app.

Apple Watches will now be able to use the motion sensors, microphone, and on-device machine learning to automatically detect handwashing motions and sounds.

It then initiates a 20-second countdown timer, and if you finish early, you will be prompted to keep washing.

Apple Watch can also remind you to wash your hands when you return home.

The Health app on iPhone will show how often and how long you're washing your hands for, as well as information on the importance of handwashing, as it relates to overall health.

When total listening with headphones has reached 100 percent of the safe weekly listening amount, Apple Watch provides a notification to the wearer.

This amount is based on World Health Organization recommendations that, for instance, a person can be exposed to 80 decibels for about 40 hours per week without an impact to hearing abilities.

You'll also see how long you've been exposed to high decibel levels each week in the Health app on the iPhone and you'll be able to control the maximum level for headphone volume.

Incoming FaceTime and phone calls now appear as a smaller banner, so they don’t take up the entire screen, making it easy to quickly tap to answer the call or simply flick to dismiss and get right back to work.

Siri now appears at the bottom of the screen when activated, letting you seamlessly reference information onscreen while making a request, and it quickly gets out of the way when launching other apps or controlling music.

iPadOS 14 brings Scribble to iPad with Apple Pencil, letting you write in any text field and have it automatically converted to typed text.

When taking notes, Smart Selection uses on-device machine learning to distinguish handwriting from drawings, so handwritten text can easily be selected, cut, and pasted into another document as typed text.

Shape recognition will let you draw shapes that are made geometrically perfect and snap right into place when adding useful diagrams and illustrations in Notes.

Data detectors now work with the handwritten text to recognize phone numbers, dates, and addresses, and offer you the ability to take actions like tapping a written number to make a call, adding an event directly to Calendar, or showing a location in Maps.

The same updates to Messages, Maps, Home, Safari, Widgets, Home, and privacy in the app store from iOS 14 are also in iPadOS 14.

New software features will be available in Fall 2020 as a free software update for iPad Air 2 and later, all iPad Pro models, iPad 5th generation and later, and iPad mini 4 and later.

In macOS Big Sur, Safari gets a few new features including a customizable start page, updated tabs, quick translation, and a Privacy Report.

The updated Messages app will let Mac users send and receive more personal and expressive messages, and easily keep track of and interact with within-group messages.

Apple also announced they are ditching Intel processing chips in their future computers for their own Apple silicon ones instead.

They claim these new chips will make their tech perform better and use less battery power at the same time.

Apple plans to ship the first Mac with Apple silicon by the end of the year and complete the transition in about two years.