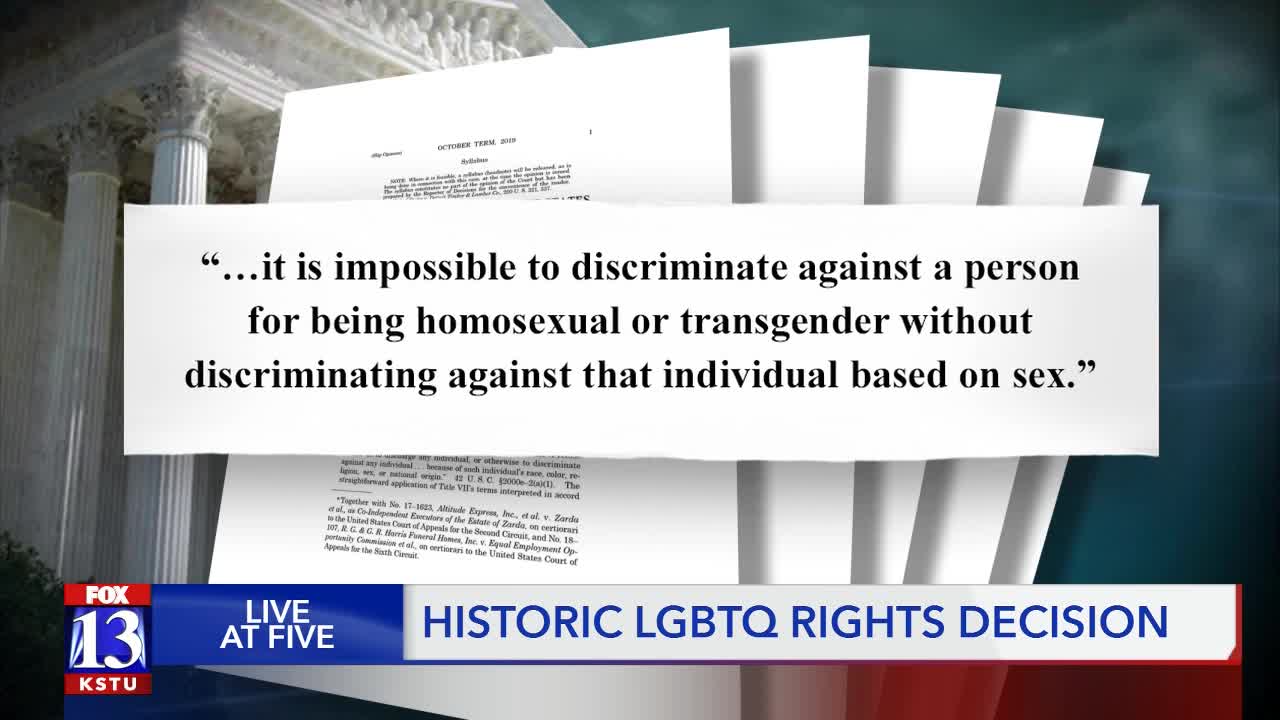 The court's majority decided that the 1964 Civil Rights Act Title Seven protections against employment discrimination based on sex includes protections for gay and transgender workers.

In two of them, gay men were fired because they were open about being gay.

In one, a transgender woman was fired because she came to work as a woman.

The court's majority decided that the 1964 Civil Rights Act Title Seven protections against employment discrimination based on sex includes protections for gay and transgender workers.

"...it is impossible to discriminate against a person for being homosexual or transgender without discriminating against that individual based on sex," Gorsuch.

University of Utah Law Professor Clifford Rosky says the ruling is a landmark.

"This is really one of the biggest victories for the LGBT movement in its history," said Rosky.

Equality Utah executive director Troy Williams says it will have a profound impact, even though Utah outlawed such workplace discrimination five years ago.

Williams added that the patchwork of state laws meant gay and transgender job seekers would have to decide if it was worth taking a job in a state that allowed employers to fire someone based on their orientation or gender identity.

"It's an incredible moment," said Williams.

Utah politicians have taken different sides on the case.

Republican Senator Mike Lee, once a clerk for Justice Samuel Alito who dissented in the case, said he agrees with his former boss.

I disagree with the Court’s decision today for the same reasons outlined by Justice Alito. https://t.co/wwuf2XYB7E

"Utah was a leader in outlawing workplace and housing discrimination against LGBTQ individuals and now the high court has ruled those protections are the law of the land,” said McAdams in a statement.

"Utah led the way, passing landmark legislation regarding anti-discrimination LGBTQ and religious rights in 2015. Our state was at the forefront of fairness for all and finding a balanced and equalizing solution to squaring religious liberty with non‐discrimination. Today, the decision affirmed rights for individuals that Utah made sure to protect with legislation in 2015,” said Adams.