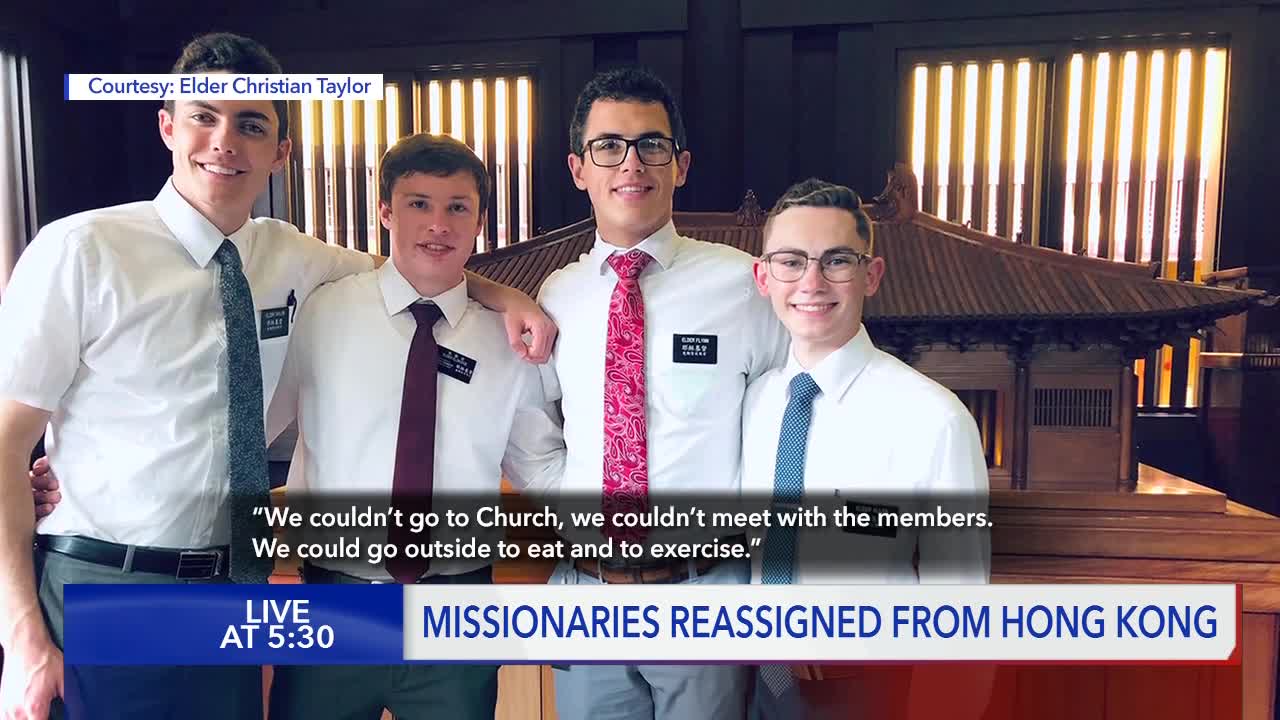 After being quarantined for fourteen days, missionaries for the Church of Jesus Christ of Latter-day Saints have been reassigned to their new areas.

After being quarantined for fourteen days, missionaries for The Church of Jesus Christ of Latter-days Saints serving in Hong Kong have been reassigned to their new areas.

Elders Russell Flynn, Logan Allen and Christian Taylor had been in Hong Kong for about eight days when they received the call saying they were not just being reassigned, they were going home to their families here in Utah and Idaho to be quarantined.

“When we found out that we were actually being sent home? Like home, home, all the way back to our families, that was crazy,” Elder Flynn said.

Coming to terms with still being a missionary while being at home for 14 days was the most difficult part for the elders.

“Getting up at 6:30 and going to bed at 10:30, my stake president still encouraged me to dress up in proselyting clothes [white shirt and tie],” Taylor said.

Elder Allen, from Meridian, Idaho, said he made personal goals to keep doing his studies.

“I wanted to continue to live the missionary guidelines as best as I could, being at home,” he said.

The rules were set based on local church leaders.

Although none of these three missionaries visited the doctor or showed any symptoms, the most important thing was to remain isolated.

“It was kind of strange because we couldn’t really be alone, we still needed to be near our companion, but we were also supposed to stay away from people for the most part,” Elder Taylor said.

That’s how it was, being quarantined in Hong Kong — they weren’t allowed to go to church meetings or meet with members and people they were teaching.

“We could go outside to eat and to exercise and that was basically it,” Elder Taylor said.

The three elders had to wait months, serving in California while they watched millions of protesters take the streets in Hong Kong.

When they finally arrived, the streets were nearly empty, except for those waiting for surgical masks.

“There would be lines up and down the streets, spanning for multiple blocks, people just waiting for these masks,” Elder Taylor said.

The three elders knew they would be reassigned to the California San Diego Mission when they left Hong Kong.

Some boarded the plane within 24 hours of finishing their quarantine.

“I’m sad that we’re not in Hong Kong, but at the same time, I’m glad to be in San Diego,” Elder Flynn said.

When they left Hong Kong, the three elders said their mission president told them that as soon as the virus passes, they will be able to return to Hong Kong and their service there.

They still have no idea when that could be.