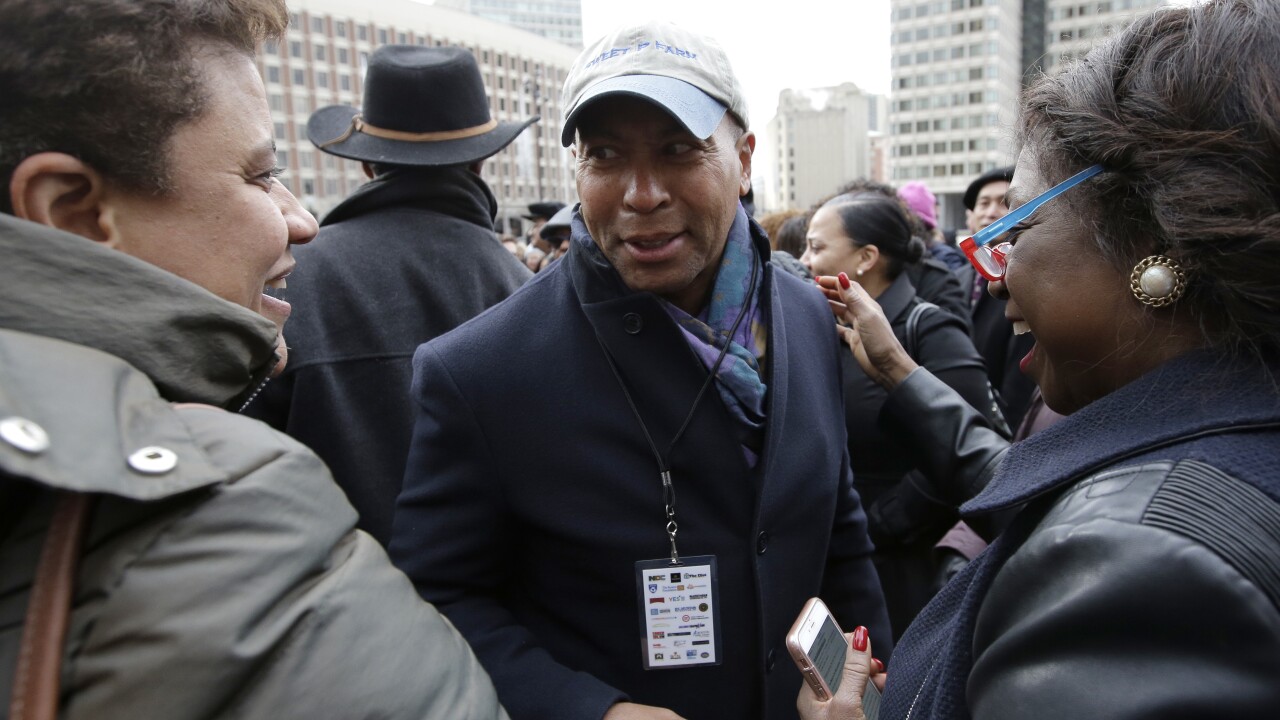 Former Massachusetts Gov. Deval Patrick is telling friends and allies in phone calls on Wednesday that he has made a decision to run for president, two people familiar with the matter say.

Plans for the timing of his formal announcement are still in flux, with attention on impeachment, but Patrick is likely to reveal his bid for the 2020 Democratic presidential nomination by video or social media message on Thursday, with a formal appearance in New Hampshire on Friday to file his papers for the primary there with the secretary of state's office, one person familiar with the plan says.

The odds could be incredibly steep for a late entrant like Patrick, who is not well known nationally and does not have personal wealth to finance a campaign. Patrick has missed the deadline to appear on the primary ballot in Alabama and Arkansas. The deadline to file in New Hampshire is Friday.

Patrick could seize upon potential advantages in early-voting states: He is from Massachusetts, which is next door to New Hampshire, home of the first-in-the-nation primary. And being one of the country's first African American governors could be politically beneficial in South Carolina, where a majority of Democratic primary voters are black.

CNN reported on Monday that Patrick was seriously weighing whether he could make a credible last-minute entry into the Democratic Party's crowded primary contest after previously ruling out a bid late last year.

The conversations began before former New York City Mayor Michael Bloomberg stepped forward last week to tease a possible run. Patrick told friends he regrets not moving forward with a 2020 campaign earlier this year and was trying to determine if it would still be possible.

His considerations were first reported Monday by The New York Times.

Last year, Patrick had built a small but formidable team of advisers in Boston as he planned a 2020 bid and had the backing of some top aides from President Barack Obama's 2008 and 2012 campaigns. But he publicly ruled out a presidential bid nearly a year ago, citing the "cruelty of our elections process."

He wrote in a December Facebook post: "After a lot of conversation, reflection and prayer, I've decided that a 2020 campaign for president is not for me. I've been overwhelmed by advice and encouragement from people from all over the country, known and unknown."

"But knowing that the cruelty of our elections process would ultimately splash back on people whom Diane and I love, but who hadn't signed up for the journey, was more than I could ask," he wrote.

Patrick told WBUR at the time that his wife, Diane, had recently been diagnosed with uterine cancer and had surgery right before Thanksgiving last year. He cited it as something that caused him to carefully consider whether he wanted to put his family though months of grueling campaigning.

Patrick entered the private sector in 2015 and took a job at Bain Capital, the Boston-based private investment firm that became a liability to the 2012 presidential run of Republican Mitt Romney, another former Massachusetts governor and now a US senator from Utah. Patrick's work at the firm, which was co-founded by Romney, could be a liability if he seeks the Democratic nomination, as he would be entering a race where frontrunner Democrats have cast wealthy and powerful interests as the enemy of progressive policies.

Patrick last year defended his work at Bain Capital, telling CNN: "I've never taken a job where I've left my conscience at the door, and I haven't started now."

Patrick had upped his political involvement ahead of the 2018 midterms -- endorsing candidates in South Carolina, Texas, New Jersey and a handful of other states -- leading many to believe he was going to jump into the race.