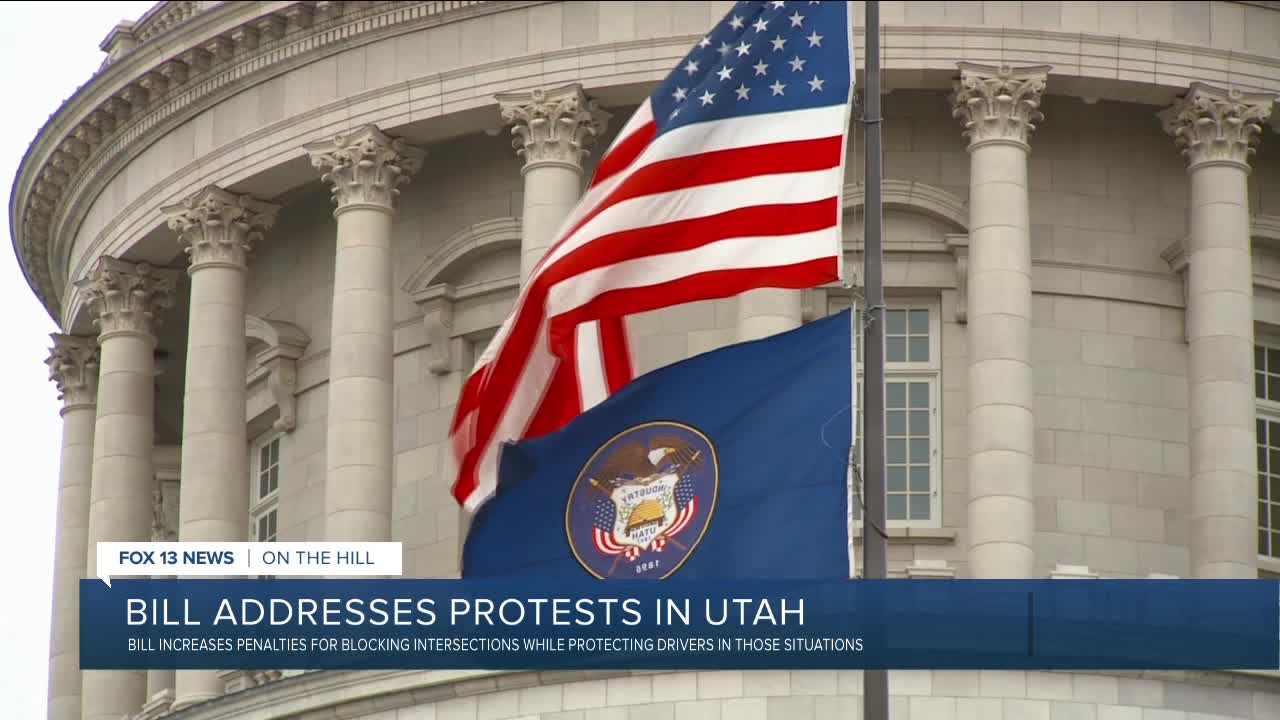 A new proposed bill for the 2021 Utah legislative session is aiming to change the language surrounding how riots are handled pertaining to roads.

SALT LAKE CITY — A new proposed bill being put forth by Utah Rep. Jon Hawkins (R) is aiming to change the language surrounding how riots are handled pertaining to roads.

Passing the Law Enforcement and Criminal Justice Committee today by a vote of 8-6, the new bill aims to change two specific things.

First, it would make “intentional obstruction of traffic" during a riot a 3rd-degree felony.

“I think this bill is important because of what we’ve seen nationally in other big cities around the country,” said Hawkins, the chief sponsor of the bill.

These proposed amendments would come under riot situations only, not peaceful protests.

“This bill is really responding to protests that we’ve seen in other states in Portland or in Seattle," said Lauren Simpson, the policy director for the Alliance for a Better Utah. "It's not really even responding to a situation that happened here."

Simpson said she is against this proposed bill.

“They’ve made such strides towards criminal justice reform,” she said of Utah lawmakers. "This is a major major backtrack.”

The Alliance itself also tweeted criticism of the bill.

"Lawmakers again seem to be drafting bills based on what happened in Portland this summer, instead of what happened in Utah," the tweet read. "As [state Rep. Angela Romero] and a defense attorney point out, we're not Portland."

Now the committee is discussing another anti-protest bill, this one keeping people in jail for longer after being arrested for rioting & requiring a judge to order restitution if you're convicted: https://t.co/PZTn7IKMAl #utleg

Three people who attended many protests throughout this year also spoke to FOX 13 in reaction to the bill. Here's what they had to say:

“I have a lot of feelings… Sad… A little bit of anger,” Jacob Siolo with the Salt Lake Equal Rights Movement said, adding that he felt the bill implied “that my freedom of speech and my first amendment right is not something to be valued.”

Siolo and the protesters we spoke to also said they wished there were more bills "protecting the rights of protesters" and not "taking them away."

Those on both sides ultimately said that they only hope to make Utah a safer place for all Utahns.

Hawkins told FOX 13 this bill is far from passed and he wants to make sure it's right for Utah, and he's open to feedback.

“Reach out to me,” he said. “I’m happy to talk about it and take suggestions.”

The bill now heads to the upcoming legislative session, which starts in January, to be considered by all of Capitol Hill.