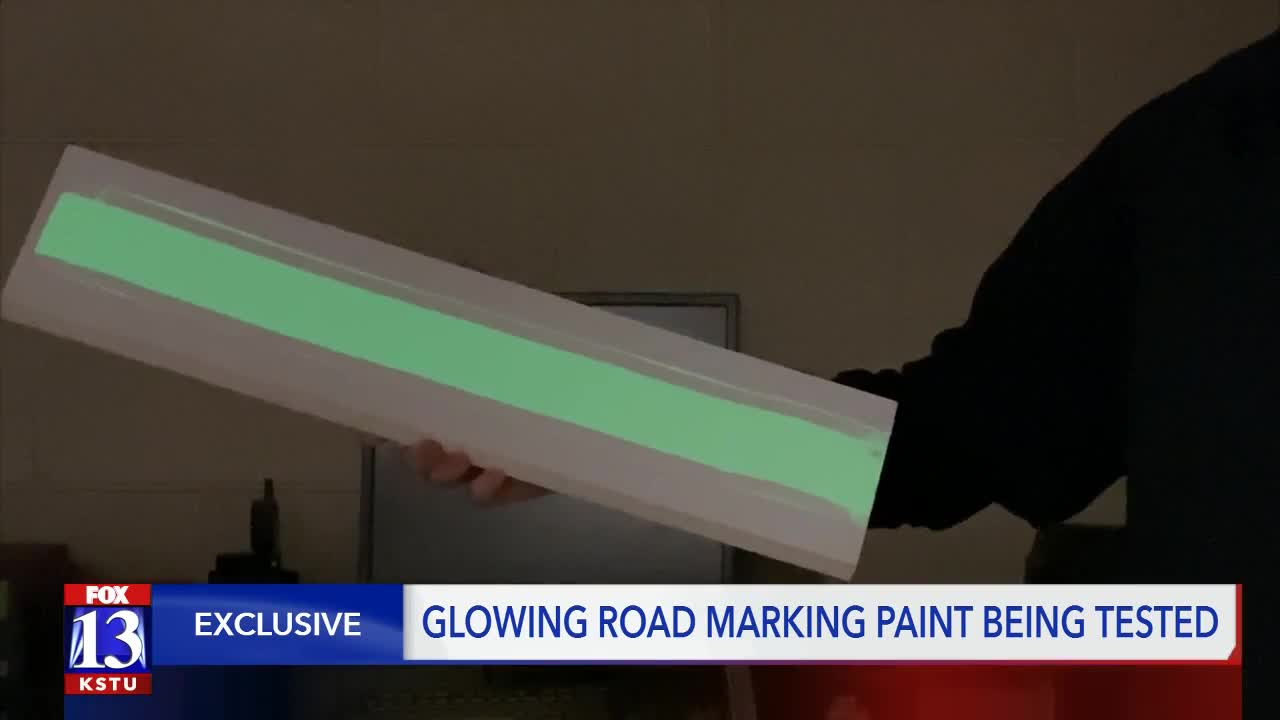 The Utah Department of Transportation is testing out some new paint that glows in the dark. It could make the lines on the road easier to see at night and during periods of heavy rain

WEST VALLEY CITY — The lines on the road can be hard to follow at night or when heavy rain starts to form puddles on the road, but now the Utah Department of Transportation thinks they may have found the solution in the form of glowing paint.

Jason Nance is the Chemistry Lab Supervisor at UDOT and is also a postgraduate student at the University of Utah. He said, "I've been able to come up with an alternative to road marking paint that can be seen during wet conditions at night."

It's called phosphorescent paint and it's essentially glow-in-the-dark paint that glows brighter than that of your average kids toy. The reason for that is it uses a different set of chemicals to make it glow.

"More specifically, it's a type of paint that is protected against the elements. Traditionally when regular paint is used, it degrades upon continual exposure to water," said Nance.

He came up with the idea as part of his thesis and decided to apply it to the real world through his job at UDOT, with the help of Taylor Sparks, an Associate Professor of Materials Science and Engineering at the University of Utah.

Nance said he wanted to make something better than what UDOT uses already.

Right now, they use a mixture of paint and glass beads, which reflect a vehicle's headlights, but UDOT says when water covers the beads they don't reflect the light, making them useless in wet conditions.

Nance also says the glow-in-the-dark paint won't break down as quickly or get ripped from the road by snowplows either.

UDOT is still in the research stages of this project, but they say they already know what they need to figure out next.

UDOT expects to start testing the glowing paint on roads in the next year or so. They'll also start off with quarter mile, half mile, and mile long sections on roads that aren't busy, so than can test it without making too big of an impact on drivers.

The glowing lines are charged by light sources like the sun or headlights from passing vehicles.

"At the end of the day, it’s got to be affordable and that’s one thing i think is very exciting with this technology is it seems to be one of the first, if not the first, cost-effective solution for glowing roads," said Nance.

If this proves to be successful, Nance says there's a chance it could be picked up by other transportation departments across the country.