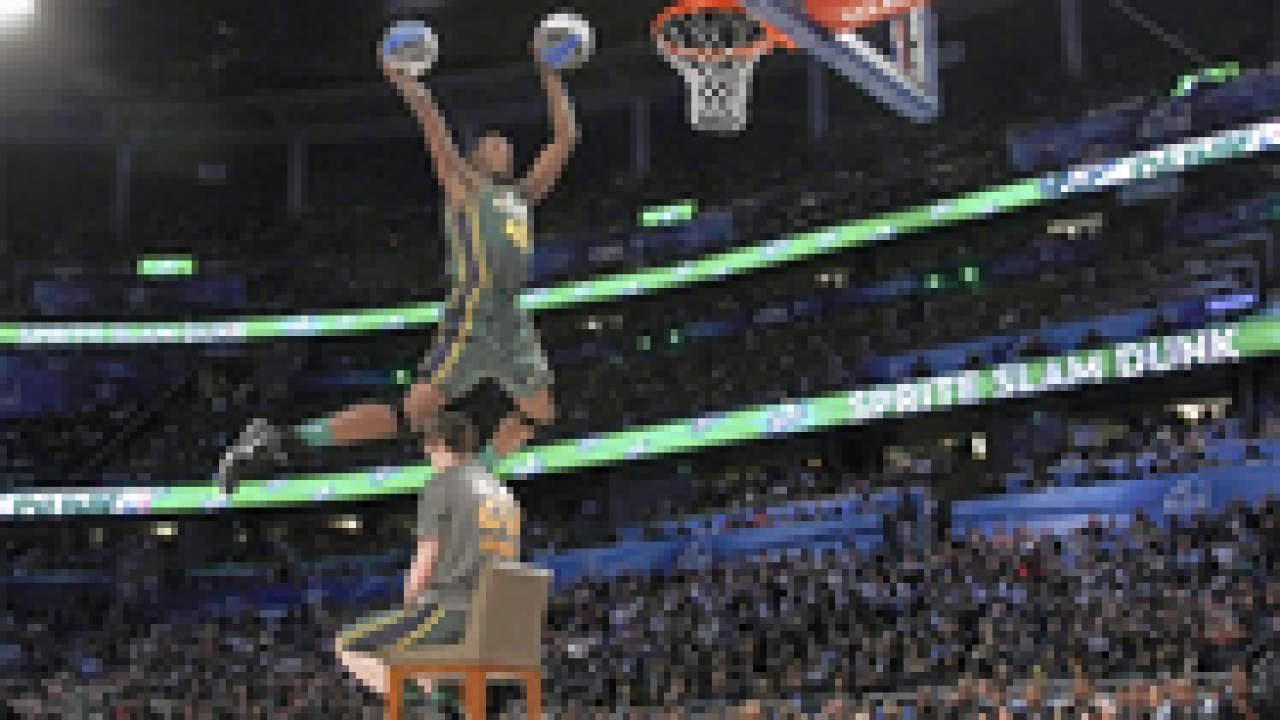 ORLANDO (Reuters)—NBA fans still don't know much about Jeremy Evans, the second year forward for the Utah Jazz, but at least now they know he can jump.

Evans, who has only three career starts, won the NBA Slam Dunk contest Saturday night with a pair of impressive dunks that included first jumping over Jazz teammate Gordon Haywood, then over comedian Kevin Hart.

Although Evans didn't bring back any of the long-ago luster of Slam Dunks past, he did beat three other little-known competitors with undistinguished NBA careers. He was going against Chase Budinger (Houston), Paul George (Indiana) and Derrick Williams (Minnesota). Evans was a late replacement after Knicks guard Iman Shumpert withdrew because of an injury.

"People really didn't know who I was before this, but after tonight, hopefully they will remember," he said. "This was huge for me."

The Slam Dunk contest was the fourth and final event of NBA All-Star Weekend Saturday night. For the first time, it was judged purely by fans, who texted, tweeted and voted live on NBA.com.

Love needed a tie-breaking shootout over Miami's Mario Chalmers to reach the final against Durant and defending champion James Jones, also of Miami. Love scored 18, 16 and 17 points in his three full rounds.

"I think this speaks to my versatility," he said. "When I first came into the league, I was told not to shoot the 3-pointers, but it's something I have worked on."

Love is having a career best season in leading the resurgence of the Timberwolves, averaging 25 points and 14 rebounds. He came into the competition with the worst 3-point shooting percentage of the six participants in the competition Saturday night.

Jones, won won the contest in 2011, had the best first-round score of 22 points, but he finished third when he struggled to just 12 points in the final round.

The home-court advantage didn't help Magic forward Ryan Anderson, who was eliminated after a first-round score of just 17 points, lowest of the six participants. Anderson leads the NBA this season in both 3-pointers made (80) and 3-pointers attempted (190), but it didn't translate well in this competition.

The Evans dunking was the highlight of the night. First he jumped over Hayward, who was seated in a chair, and dunked two balls that were tossed to him by his Jazz teammate. He then flew over Hart, who had delivered him a package that included a Special Delivery Karl Malone jersey.

Other notable dunks included Budinger wearing a blindfold, George with the lights turned out, and Williams with a pass off the side of the backboard.