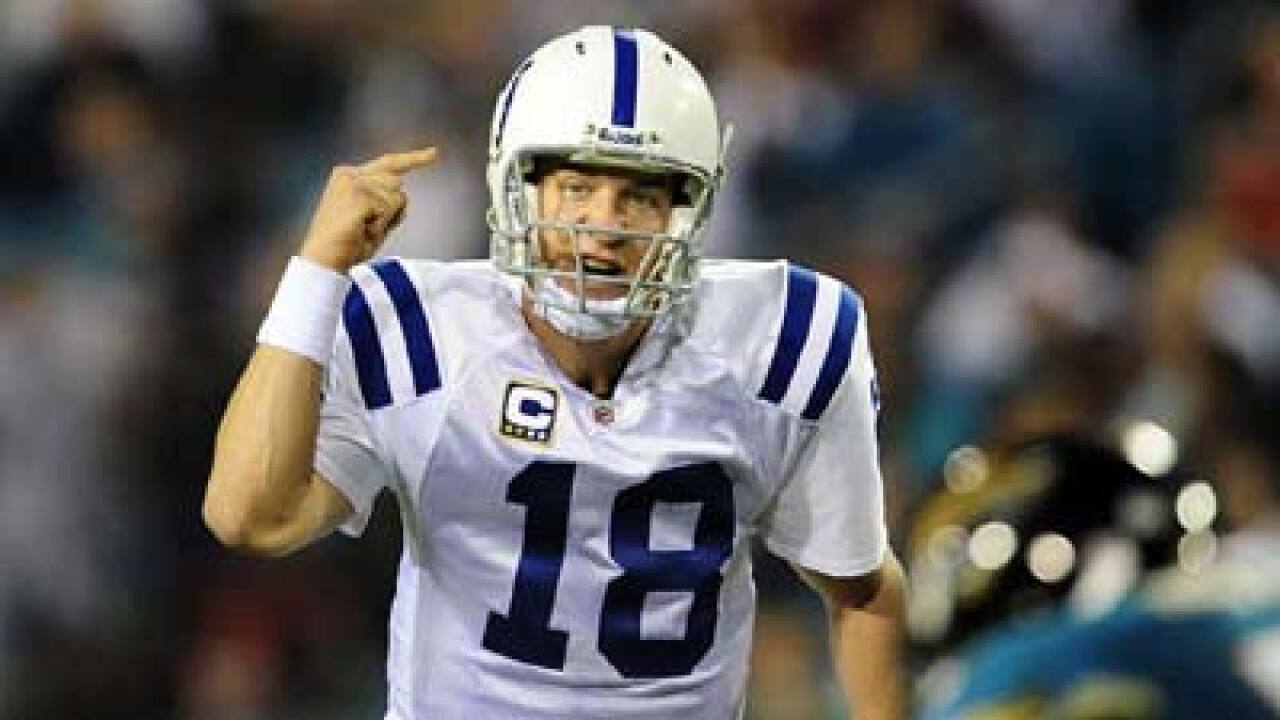 (CNN) — A tearful Peyton Manning announced the end of his 14-year career with the Indianapolis Colts on Wednesday, but said he plans to be playing in the NFL again.

In a press conference with Colts owner Jim Irsay, the four-time NFL Most Valuable Player said circumstances had brought his time with the Colts to an end, despite both the wishes of him and Irsay that things could have worked out differently.

“It wasn’t his decision. It wasn’t my decision. Circumstances kind of dictated it,” Manning said.

Manning did not play during the entire 2011 season after having surgery to repair a neck injury. With their longtime leader off the field, the Colts plummeted to a 2-14 record and earned the top pick in April’s NFL Draft. That makes Stanford quarterback Andrew Luck and Baylor QB Robert Griffin III available to them. Both are considered franchise quarterbacks, much like Manning was when the Colts selected him with the No. 1 overall pick in the 1998 draft. The Colts are expected to take Luck or Griffin and begin to rebuild the team.

Irsay said Wednesday keeping Manning during that rebuilding process wouldn’t be fair to Manning and would prevent the team from having the money necessary to revamp its roster. The Colts would have owed Manning a $28 million bonus if he’d remained on their roster past Wednesday.

“Just to sign our draft picks, we’re going to have to make more roster moves,” Irsay said. Manning deserves better at the end of a Hall of Fame-level career, he said.

Manning’s doctors have cleared him to play for the 2012 season and he’s been seen recently working out at Duke University. The quarterback said he plans to be on the field in the coming season.

“I don’t want to retire… Nobody loves playing quarterback more than me,” Manning said.

The Miami Dolphins, Washington Redskins and Arizona Cardinals are considered the top contenders to sign Manning.

In the meantime, the Colts will retire his jersey number.

“The 18 jersey will never be worn again by a Colt on the field,” Irsay said.

Both Manning and Irsay choked up as they made the announcement that Manning would continue his NFL career elsewhere.

“This town and this team mean so much to me,” Manning said. “I do love it here.”I’ve been blessed to play here and been blessed to be in the NFL,” he said, his voice breaking. “I truly have enjoyed being your quarterback.”

Though his team will more than likely have another potential superstar in Luck or Manning, Irsay said Manning has defined the franchise.

“There will be no other Peyton Manning,” he said, choking up as he held the quarterback’s arm.

Colts fans were sad to see their city’s shining star on his way elsewhere.

“I wouldn’t be nearly as big a fan without him,” CNN affiliate WTHR-TV quoted fan Aly Wiggs as saying.

“I’m disgusted. Manning is who Indianapolis is. He’s our identity and what he’s done for the community. He’s more than a football player,” Bob Nellish told WTHR.

Indianapolis Star columnist Bob Kravitz says fans will be angry with Irsay for letting the pride of the city and the state leave town.

“It’s impossible to overstate the civic impact Manning had on this franchise, on this city and on this region. He did it not only as an athlete but as a philanthropist. He was, and still is, the most important athlete ever to grace the playing fields of Indianapolis,” Kravitz wrote Wednesday morning.

In 1999, Manning and his wife established the PeyBack Foundation in Indianapolis to help disadvantaged youth. It has donated more than $4.3 million since its founding to youth causes in Indiana, Tennessee and Louisiana, according to the foundation’s website.

In 2007, in honor of Manning’s work, St. Vincent Children’s Hospital in Indianapolis was renamed Peyton Manning Children’s Hospital. The city’s Children’s Museum, Boys and Girls Clubs, and high school football players have all been helped by Manning, according to a WTHR report.

“There will be lots of tears today at that news conference,” Kravitz writes. “Without No. 18, the Colts might not still be in Indianapolis. Certainly, there’s no Lucas Oil Stadium, and there’s no Indianapolis Super Bowl. His impact is incalculable.

In the cities that covet Manning, it was websites and billboards that were going up.

In Miami, there was manningtomiami.com, complete with Manning depicted in a Dolphins uniform, a link to a petition to be presented to Dolphins owners and a shop to buy Manning in Miami T-shirts.

“When’s the last time we the fans have had an ‘impact’ quarterback? What about the most cerebral quarterback of all time?” the Miami site asks. “Get behind this movement and let your vote be your voice and make a difference!”

In Phoenix, the peyton2az website showed a picture of a billboard erected in the city by a local mattress retailer. “Peyton Manning, please sleep here,” it pleaded.

“The city will be his forever if he could bring a Super Bowl to the Valley of the Sun,” a commenter wrote on the site.