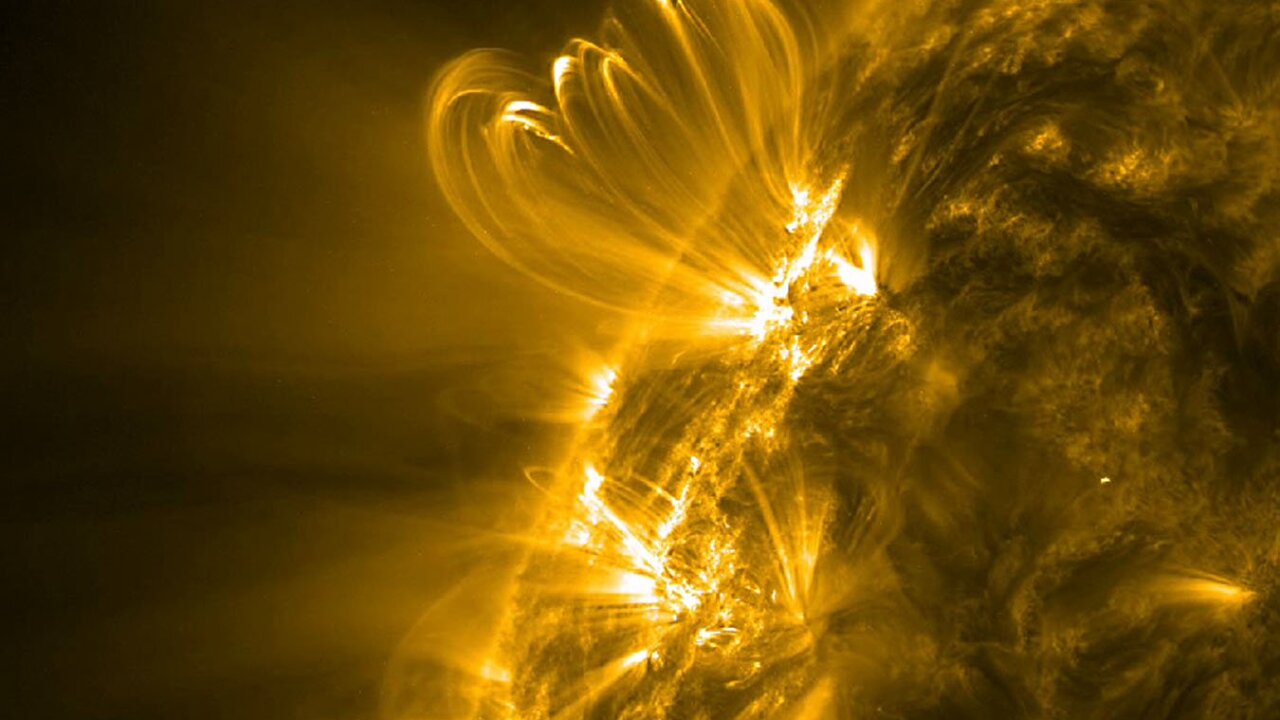 profile view of cascading loops spiraling above it (Jan. 15-16, 2012) following a solar flare eruption. These loop structures are made of superheated plasma, just one of which is the size of several Earths. With its ability to capture the Sun in amazing detail, SDO observed it all in extreme ultraviolet light. This particular video clip used an image every five minutes to present the motion.

(CNN) — Geomagnetic and solar radiation storms hitting Earth after Tuesday’s solar flares may not be as big as advertised, the National Oceanic and Atmospheric Administration said Thursday.

Together, such storms can affect GPS systems, other satellite systems and power grids, but none of these problems has been reported, even as the leading edge of the sun’s coronal mass ejections from Tuesday hit Earth on Thursday morning, scientists said.

The geomagnetic storm has reached only G1 intensity on a scale from G1 (weak) to G5 (extreme), and the solar radiation storm is an S3 (strong) on a similar 1-to-5 scale, NOAA’s Space Weather Prediction Center said. Earlier, NOAA had predicted a G3/S4 event.

Still, the solar radiation storm has prompted some airlines to divert planes from routes near the north pole, where radio communications may be affected and passengers at high altitudes may be at a higher than normal radiation risk.

“Today we are using alternate routes for seven westbound flights to Asia. We will monitor possible solar impact to the operation in making decisions for tomorrow and future dates,” Delta Air Lines spokesman Anthony Black said.

The geomagnetic storm still could give earthlings quite a show Thursday night. The storm is expected to produce auroras, or northern lights, that may be visible as far south as the northern United States, said Physicist Joseph Kunches with the Space Weather Prediction Center.

Kunches likened the challenge of forecasting the strength of the storms to hitting a major league pitcher’s fastball.

“Like a hitter, we try (to) figure out if the pitch is coming down the middle of the plate or is low and outside,” Kunches said. “The problem is, the pitch comes from the sun from 93 million miles away.”

Forecasters also try to figure out which way the particles ejected from the sun are oriented, which has major implications on how strong the event will be.

“Like a curveball, the orientation can change. We didn’t see the spin with this event,” Kunches said.

He added that the event is not over, and the effect of the solar radiation could increase if it becomes better aligned later Thursday. By Friday morning, the solar storm should be diminishing.

The sunspot that produced the storms, however, still will be facing Earth through the weekend, and further emissions could bring new storms to the planet.