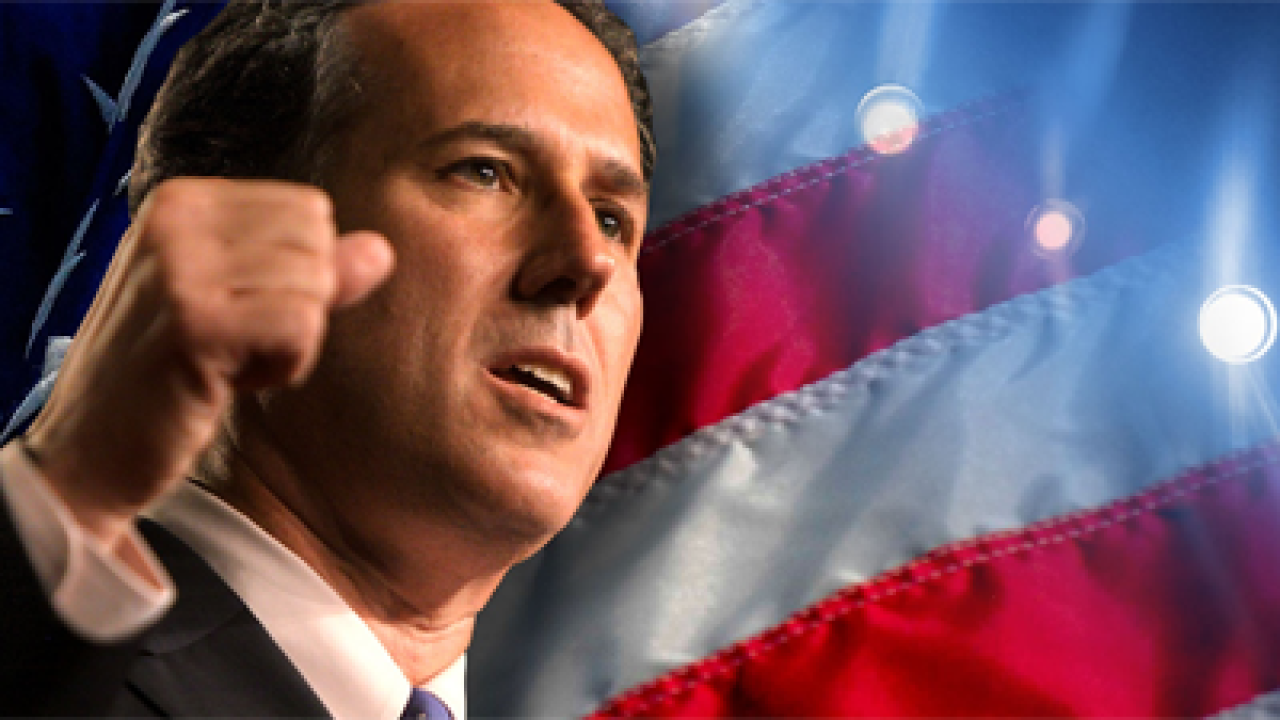 “We are very pleased to see the Santorum surge sweeping through the Jayhawk State,” Santorum spokesperson Hogan Gidley said. “This is a great win for the campaign and further evidence that conservatives and tea party loyalists are uniting behind Rick as the true, consistent conservative in this race.”

Mitt Romney and Newt Gingrich abandoned plans to campaign in the state and instead focused on Tuesday primaries in Mississippi and Alabama. Texas Rep. Ron Paul campaigned in Kansas on Friday and Saturday.

Kansas is home to many social conservatives that ideologically mesh with Santorum’s anti-abortion, anti-same-sex marriage, pro-family, pro-religious freedom stances. Those positions helped Santorum barrel to primary victory in the neighboring states of Oklahoma in this week’s Super Tuesday contests, and in Missouri on February 7.

Because the 40 delegates at stake in Kansas’ caucuses will be awarded in proportion to the results, they will be split up among the other candidates — even those who did not campaign here.

Because of that, Romney’s campaign sees political fortune despite skipping the contest.

“We hope to continue to pick up delegates in the upcoming contests in Kansas, Guam, the Northern Mariana Islands and the Virgin Islands,” Romney spokesman Ryan Williams said. “After winning a majority of Super Tuesday states, Governor Romney has built a commanding lead in the race for delegates that will make it nearly impossible for any of our opponents to win the Republican nomination.”

“I am grateful to have won all nine delegates in Guam,” Romney said in a statement after the vote. “The people of Guam have always stood bravely for America and the values we hold dear.”

Meanwhile, with question marks hovering over Santorum’s chances in the two upcoming Southern primaries, any bragging rights he may claim from a Kansas win may be short-lived.

A fresh poll out in Mississippi showed Santorum running behind Gingrich and Romney. Alabama will be an equally important test of Santorum’s appeal in the South.

And yet, coupled with his Missouri and Oklahoma wins, Santorum will likely argue that he performs well in the Midwest — a region that will be key in the general election.

The executive director of the Kansas Republican Party predicted Santorum would do well. He also weighed in on Romney and Gingrich’s political missing-in-action status in the state.

“I’m not going to criticize any candidate for how they decide to use their resources. Gingrich still has a very active ground game here. He just decided personally to go to Alabama and Mississippi,” Clay Barker said.

Regarding the former Massachusetts governor, Barker said: “Romney probably had a base of support here, but he didn’t energize it by having a campaign.”

Kansas’ caucuses were open only to registered Republicans.

Before the weekend causues, according to CNN’s latest count, Romney had 429 delegates, compared with 169 for Santorum, 118 for Gingrich and 67 for Rep. Ron Paul of Texas. A candidate needs 1,144 delegates at the Republican convention this summer to secure the nomination to face President Barack Obama in November.

Romney substantially increased his delegate lead on Super Tuesday but failed by most accounts to deliver a knockout blow. He squeezed out a razor-thin popular vote win in the bellwether state of Ohio while carrying his home state of Massachusetts, plus Idaho, Vermont, Virginia and Alaska.

Santorum won North Dakota, Oklahoma and Tennessee, while Gingrich cruised to victory in his home state of Georgia.