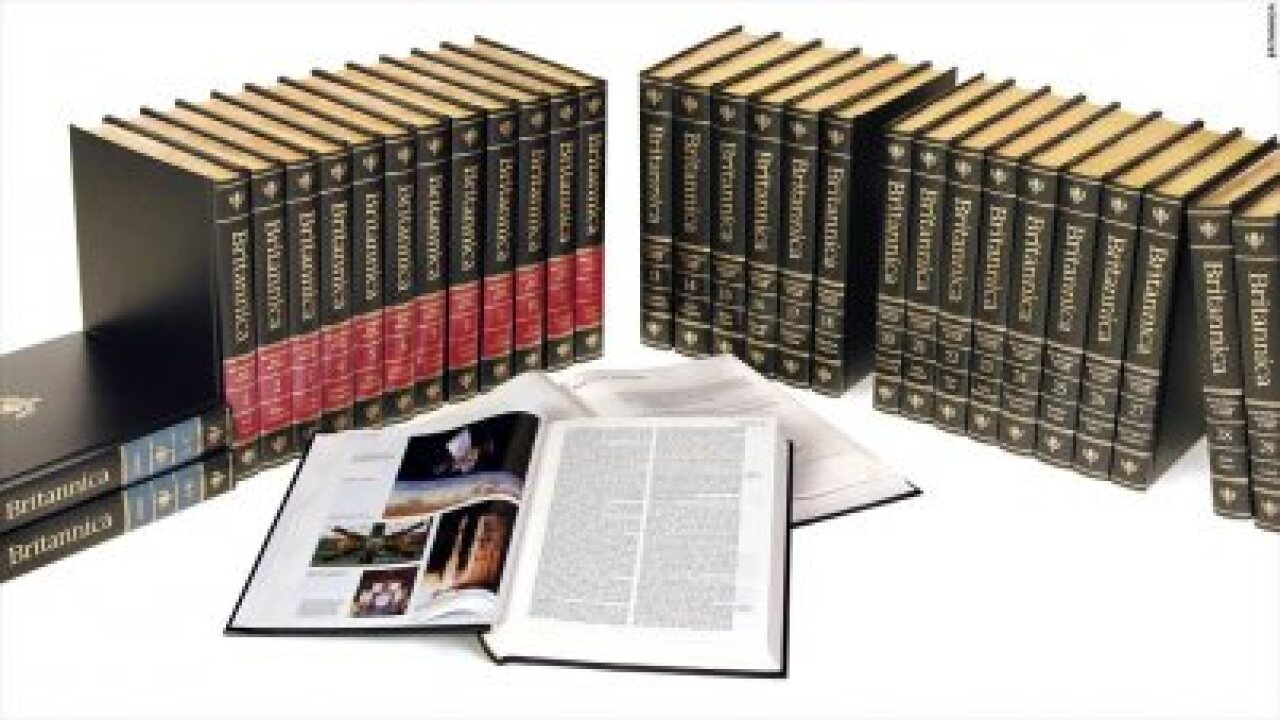 Britannica usually prints a new set of the tomes every two years, but 2010′s 32-volume set will be its last. Instead, the company will focus solely on its digital encyclopedia and education tools.

The news is sure to sadden champions of the printed word, but Britannica president Jorge Cauz said the move is a natural part of his company’s evolution.

“Everyone will want to call this the end of an era, and I understand that,” Cauz says. “But there’s no sad moment for us. I think outsiders are more nostalgic about the books than I am.”

In truth, Cauz says, the death knell sounded long ago. Though the name “Britannica” calls the print sets to mind, Cauz says they represent less than 1% of the company’s total sales.

“The print set is an icon. But it’s an icon that doesn’t do justice to how much we’ve changed over the years,” Cauz says.

The online version of the encyclopedia, which was first published in 1994, represents only 15% of Britannica’s revenue. The other 85% is sales of education products: online learning tools, curriculum products and more.

That’s not surprising to Michael Norris, a senior trade books analyst at Simba Information, who says reference books have taken the worst hit with the rise of digital.

“This has been the reality of reference texts for years now,” Cauz says. “Updating dozens of books every two years now seems so pedestrian. The younger generation consumes data differently now, and we want to be there.”

Will people pay for Britannica? That younger generation is accustomed to finding content for free via Google or that other online encyclopedia: Wikipedia. It’s unclear whether people will be willing to pay for a household subscription, which costs $70 per year, or an app version for $1.99 per month.

“Google’s algorithm doesn’t know what’s fact or what’s fiction,” Cauz concedes. “So Wikipedia is often the No. 1 or No. 2 result on search. But I’d bet a lot of money that most people would rather use Britannica than Wikipedia.”

Britannica will start offering more free content to entice potential subscribers. But Cauz doesn’t expect Britannica to replace or even overtake Wikipedia. He sees the situation as “different senses of responsibility.”

He adds: “Wikipedia is a wonderful technology for collecting everything from great insights to lies and innuendos. It’s not all bad or all good, just uneven. It’s the murmur of society, a million voices rather than a single informed one.”

As a result, Cauz says, consumers are craving accuracy and are willing to pay for it.

“We have an important role to play,” Cauz says. “I think Wikipedia sees us as a relic of an old era. But facts always matter, no matter what form they take. Our mission hasn’t changed, just the method.”

In a nod to those changes, Britannica is relaunching its site in three weeks to add more social connections and interactivity.

Cauz says he celebrates those changes, as well as the end of the print set — which was first published in Scotland in 1768. In fact, Britannica is throwing itself a party on Wednesday.

“We’re going to have a cake in the shape of a print set to celebrate,” Cauz says, laughing. “Is that morbid?”