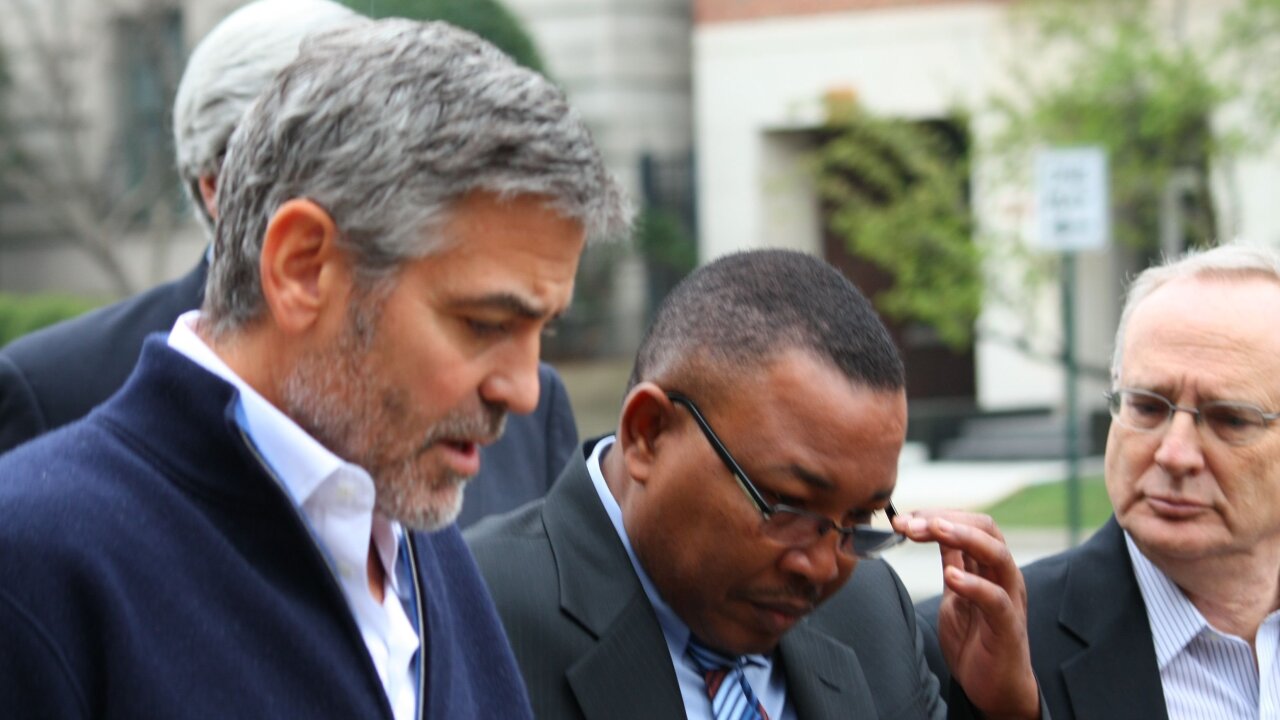 Actor and activist George Clooney and others attend a protest outside the Embassy of Sudan in Washington on Friday, March 16, 2012.

WASHINGTON (CNN) — Police arrested actor George Clooney and others Friday during a protest at the Sudanese Embassy in Washington.

“We are here really to ask two very simple questions,” Clooney said moments before his arrest. “The first question is something immediate — and immediately, we need humanitarian aid to be allowed into the Sudan before it becomes the worst humanitarian crisis in the world.”

The second thing, he said, “is for the government in Khartoum to stop randomly killing its own innocent men, women and children. Stop raping them and stop starving them. That’s all we ask.”

Protesters had begun gathering in the street before the protest began and converged on the Embassy once Clooney and the others arrived, holding signs reading “Stop Bombing Civilians Now!” and “End the silence stop the violence.”

Jealous directed a message to the Sudanese president: “This is what beginning of the end looks like.”

“We are protesting to make sure the Sudanese government knows that the world is watching,” McGovern said. “The United States Congress is watching. And we will be back again and again until they stop using food as a weapon; stop slaughtering innocent men, women and children; and stop spitting in the face of the world community.”

After speeches by several of the protest leaders, a police officer told the group she was giving them a third warning, after which they would be arrested.

A few moments later, the arrests began. The group stood calmly as they waited for the police to apply plastic handcuffs as the crowd of protesters chanted “al-Bashir to the ICC,” referring to the International Criminal Court, where Sudanese President Omar al-Bashir has been indicted.

Clooney was charged with disorderly crossing of a police line, a misdemeanor, Secret Service spokesman Max Millien said. He is expected to pay a $100 fine, a law enforcement official said.

Clooney met with President Obama on Thursday to discuss his concerns about Sudan.

He testified before the Senate Foreign Relations Committee this week about violence in the Nuba Mountains in South Kordofan, a state in Sudan near its border with newly independent South Sudan.

Clooney and other activists blame the Sudanese government for attacks there that have injured and killed civilians.

Clooney told the Senate committee that the attacks are being orchestrated by Sudan’s government, led by al-Bashir, government official Ahmad Harun and Defense Minister Abdelrahim Mohamed Hussein — the same three men, he said, who orchestrated long-documented attacks in Darfur.

“What you see is a constant drip of fear,” testified Clooney, who just returned from a trip to Sudan. “We found children filled with shrapnel, including a 9-year-old boy who had both of his hands blown off.”

This month the International Criminal Court issued an arrest warrant for Hussein, listing 41 counts of crimes against humanity and war crimes allegedly committed in the Darfur region of Sudan. Al-Bashir and Harun are also facing war crimes charges involving Darfur.

Clooney is co-founder of the Satellite Sentinel Project, which uses satellite imagery to watch for aerial attacks and troop movements in Sudan and South Sudan, which became a separate country last year.