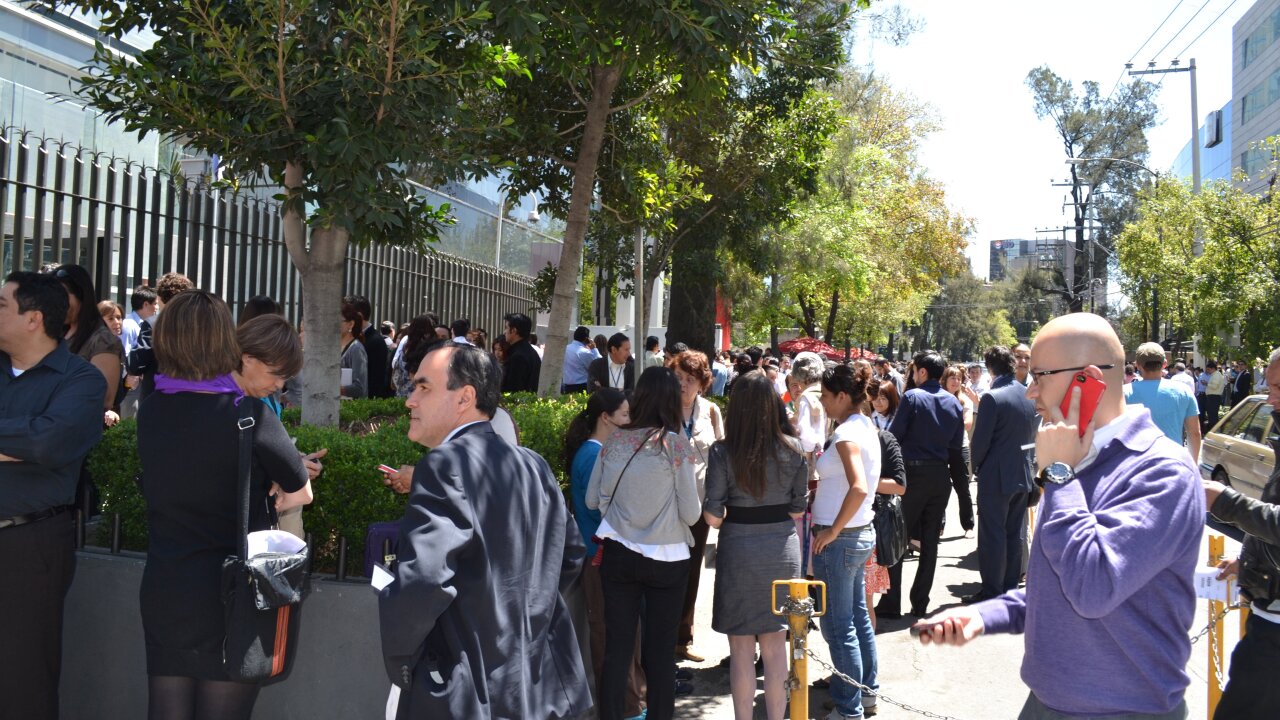 People in the business district of Lomas de Chapultepec en Mexico City wait outside their offices after the city experienced a minor earthquake.

OMETEPEC, Mexico (CNN) — Mexican officials were assessing damage Wednesday, a day after a strong earthquake left homes in ruins and rattled residents hundreds of miles away from the epicenter.

At least 11 people were injured and hundreds of houses were damaged in the 7.4-magnitude quake, which struck midday Tuesday in southern Mexico near Ometepec, Guerrero.

In some of the hardest-hit areas, residents surveyed rubble where adobe homes once stood. Nurses tended to patients in a parking lot beside a hospital damaged by the quake.

Paulino Sisto said he sprinted toward his home in Ometepec when the quake hit, fearing for his family inside.

“I couldn’t even walk because the earth was shaking. It was moving back and forth like a hammock,” he said.

From a distance, Sisto saw clouds of dust rising as houses collapsed in his neighborhood. His family survived, but their home didn’t.

“No one has come to help us,” he said Wednesday. “These areas are very abandoned. There is no highway. There is no way here. Cars can’t get through because of the earthquake yesterday. Dirt is blocking the roads.”

The massive quake sent broken tiles and pieces of buildings falling onto sidewalks as far away as Mexico City, about 200 miles (320 km) from the epicenter.

The city’s mayor said the earthquake was the strongest to affect the capital since an 8.0 temblor that struck in 1985, killing about 10,000 people in the sprawling metropolis.

Officials said no deaths had been reported after Tuesday’s quake, despite the widespread alarm it caused.

Although Tuesday’s quake was strong, its magnitude was lower than the 1985 quake, which means significantly less energy was released, said John Bellini, a geophysicist at the U.S. Geological Survey.

Going up one full magnitude would mean 10 times the ground motion. Even with the sixth-tenths magnitude difference between Tuesday’s 7.4 temblor and 1985’s 8.0 quake, “you’re talking about a big difference in the shaking and all the associated potential damage,” he said.

The relatively low population near the epicenter of Tuesday’s quake and improved building codes in the Mexico City area also may have been a factor, he said.

The quake’s epicenter was about 15 miles (25 kilometers) east of Ometepec, a municipality of about 50,000 people, including enclaves of indigenous communities.

“You could see the fear on everyone’s faces,” said Olga Libia Ramos, the chief nurse in the city’s general hospital.

Officials evacuated patients into the parking lot after the quake shattered windows in the hospital, she said.

At least 500 homes in the southern coastal state of Guerrero were damaged, Gov. Angel Aguirre said.

Authorities said two people were injured in Mexico City, including the driver of a minibus that was crushed when a pedestrian bridge collapsed during the quake.

Office workers rushed into the streets after feeling the temblor in Mexico City. Tourists and residents also felt the earthquake in the resort city of Acapulco, about 100 miles (200 km) from the quake’s epicenter.

The USGS describes Mexico as one of the most seismically active areas of the world.

The country sees an average of seven earthquakes daily with a magnitude greater than 3.0, according to Mexico’s National Seismological Service.